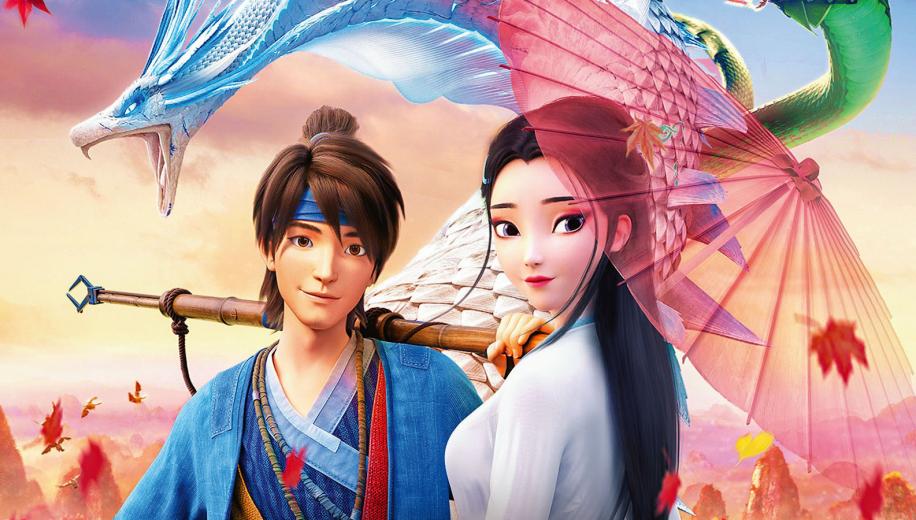 Based on the Chinese fable, The Legend of The White Snake, this debut directorial feature is a striking animation which enjoys its wuxia aspirations and delivers some superb action, almost balancing the interests of children and adults alike.

The fable of the White Snake has been told in so many forms, that it's hard to argue which one is the correct narrative, giving newcomer co-directors Amp Wong and Zhao Ji the opportunity to put their own spin on the mystical characters, bringing plenty of the different twists from over the ages into play as they attempt to paint a story of well-rounded individuals, often flawed, and far from mere black and white heroes and villains.

Magically-vested sisters Blanca and Verta are tasked with stopping the rule of an evil Emperor, who is draining dark energies from all the snakes in the land. After an assassination attempt on the Emperor sees Blanca defeated, she wakes in a small village with no memory of her powers, or her true nature, and falls in love with a young snake catcher Xuan. When Verta finds out what has happened, however, she takes it as a betrayal, and with the Emperor's lead sorcerer on the trail of Blanca, Xuan is about to find out that he is in way over his head.

The potential to engage audiences old and young

White Snake probably suits the lavish anime format for, as much as its love story core and wuxia vibe gives it some similarities to everything from Crouching Tiger to, more recently, Shadow, the extensive mystical giant super-snake CG is just better served in an animation, and far less likely to pull viewers out of the feature (compare this to Iron Mask, for example). And wow, is it a gorgeous looking animation, replete with stunning character design and absolutely flawless backdrops - each one a wondrous vision of an almost impossibly super-real landscape.

The opening battle is spectacular, and White Snake drops the momentum once it enters the amnesia phase, getting a bit sidetracked by talking dogs, mystical charm dealers and puzzle-ridden tombs, and possibly trying to cram a little too much into its runtime before it returns to its core tale of mystical sisters, dark warlords and empresses, and the gifted village boy caught up between them all. Still, it eventually builds to a superb extended finale brimming with more impact than you might expect from a PG story like this, and rounding out a voyage that has the potential to engage audiences old and young.

White Snake comes to UK Blu-ray courtesy of Dazzler, with an excellent presentation that brings the gorgeous animation and visually opulent imagery to life superbly.

The disc presents a 1080p/AVC-encoded image framed in the movie's original theatrical aspect ratio of 2.4:1 widescreen.

Detail is excellent, the screen often brimming with nuances; clothing textures are elaborate and striking, hair, wood, trees, it's an utterly stunning landscape immaculately rendered - so impressive indeed that you'd be forgiven for dreaming about whether this kind of image would have warranted a 4K release.

Colours are striking, with a wondrous palette that enjoys some gorgeous glowing jade greens, purples, pinks and radiating yellows and oranges, whilst the backdrops and skylines look good enough to be real. Black levels are rich and deep and it's one of the most visually magnificent Blu-ray presentations of recent time.

White Snake's Blu-ray release does not offer an original language track, but the English dub is still excellent, promoted in DTS-HD Master Audio 5.1, and hard to fault in any way, sweeping you up into the exciting fantasy adventure.

Dialogue remains clearly prioritised, largely across the frontal array, whilst effects are disseminated across the surrounds with aplomb, bringing the multitude of magical wonders to life on the soundstage. From the flowers in the wind to the crashing waterfalls to the epic battle sequences, effects are excellently promoted, crafting an electric soundscape with some decent LFE underpinning too, and a strong score element to round out the aural offering.
﻿

White Snake is a pretty impressive directorial debut. It may occasionally struggle with the expansiveness of the original fable (or the expansion required to give it this prequel narrative) but it's pretty impressive nonetheless, and it looks absolutely stunning, with some sweeping, epic setpieces brimming with impact.

Dazzler brings White Snake to UK Blu-ray with excellent video and a very good audio track, as well as just a trailer in terms of extras but, nonetheless, this is a good release.