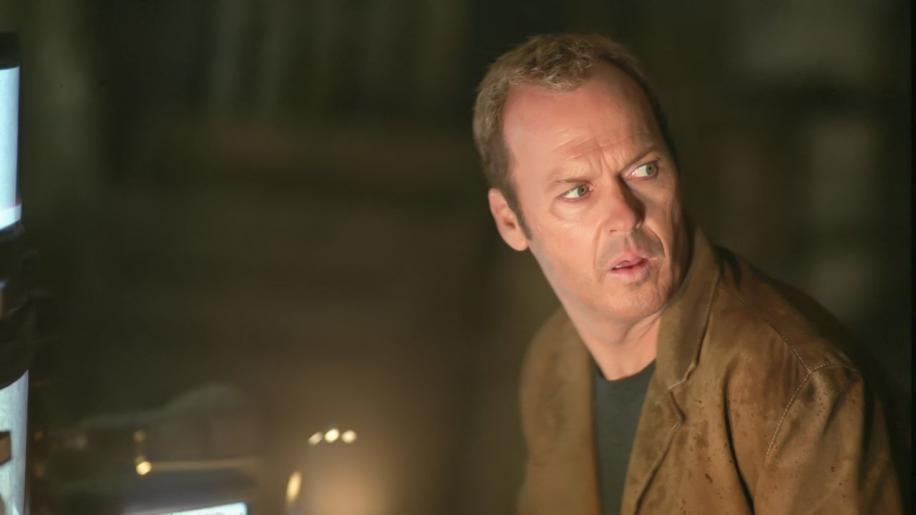 Picture quality is excellent for this NTSC transfer and looked fabulous on my new Toshiba LCD 28 inch set. Colours are bright, bold and vivid in delivery. Images are sharp with no visible jarred edges or contours. There are no apparent compression artefacts; it is a truly clean transfer that shows the digital format at its best. The only thing that slightly mars this picture is the stuttered effect that 3:2 pull down causes. The NTSC format dictates that the film rate is 30 frames per second (more specifically 29.970fps). Without going into a complicated and 'geeky' description I'll simplify it. Basically, film is shot at 24fps. This up conversion needed to get to 30fps involves repeating certain frames. This is usually fairly unnoticeable during a movie. The only time it becomes very apparent is when a scene pans slowly from left to right. Then the sequences sort of stutters as you can see the extra repeated frames. There are numerous sequences in this movie where a scene starts with a lengthy camera pan. This of course is no fault of the transfer or DVD production, but merely a side effect to the NTSC format.

Sound is presented in Dolby Digital 5.1. The sonic steering that accompanies the unsettling imagery is certainly used to great effect. The listener is distracted and disorientated as the sounds pan around the speakers to invoke that feeling of unease and discomfort during the more spooky scenes. This works well and ideally the movie would have benefited from more sequences of this kind.

Extras are very few on this DVD and I was extremely disappointed with the content. What we do get is a collection of deleted scenes and a series of short interviews / documentaries about Electronic Voice Phenomenon. These are broken down into the following: Making Contact: An explanation of exactly what this paranormal activity is and also how to make your own EVP recordings of the other side.
Hearing Is Believing: Live filming of an EVP recording session.
Recording The Afterlife At Home: This needs no explanation.

These are interesting to watch. I am quite a fan of the unknown but also a complete sceptic with regard to the paranormal world. This by no means changed my way of thinking but it certainly opened my mind a little. Why there are no extras pertaining to the making of the film is beyond me. Considering this is a fairly major release it is very much lacking in behind-the-scenes footage, unless of course their plan is to release a further special edition containing more footage. This I would bet my new LCD screen on!

To conclude, this certainly was not a bad film and I did enjoy it. I am a Michael Keaton fan and like the fact that he is a very diverse actor. I loved him in the role of Beetlejuice and felt sure that he would reprise this role for a sequel but it has never come to be. As Batman he certainly brought a great dark side to the caped crusader. Even some of his lesser known movies such as 'The Dream Team' saw him exploring his great ability to play a psychologically unbalanced character. So it is great to see him return to the big screen. This film could have been a fantastic film. Keaton's character was a perfect vehicle for him to excel in his creativity. It's just a shame the depth of his character was not explored more. Also, these movies rely on keeping the audience on the edge of their seat and then delivering various shocks; these are mostly psychological in origin but are intensified by strong quick visual images and increased audio tension. This movie does contain a number of these terror-generating sequences but I felt it fell a little short of having the impact it could have done. I wanted to feel more uncomfortable watching it. I wanted to feel uneasy. I wanted to experience the chills more intently. This is what I expected from this genre and whilst I cannot deny at times I wandered whether watching this film on my own was a good idea, I was soon back analysing how it could have been done to a greater effect.

As a popcorn movie this is a great film, but to put up against the other major release films of its genre (specifically the work of M Night Shyamalan) then it doesn't really compare that favourably. Give it a go. You won't hate it!