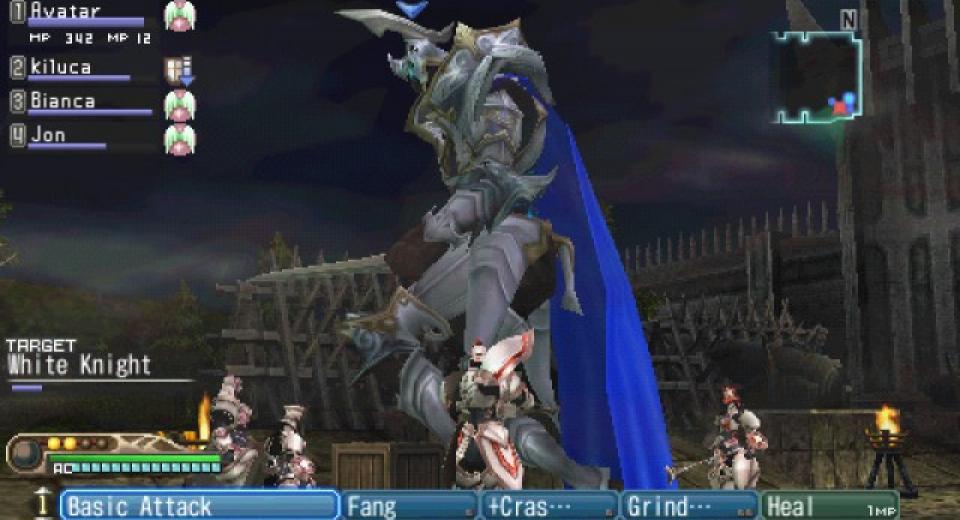 Who exactly were the unsung heroes of the Dogma Wars?
In the unlikely event that this is a question that’s kept you up at night, and assuming you’re unable to Google the answer or pay someone to trudge through the 30-hour campaign on your behalf, then White Knight Chronicles: Origins is the game for you. Rather than continue the story of Leonard that provides the focus for the PS3 iterations of the franchise, Matrix Software have spun off into the Dogma Wars, a conflict between the Yshrenian Empire and the Athwani that took place 10,000 years before White Knight Chronicles 1.  The story begins in your character’s home city of Xarmgard, which has come under ferocious attack and is on the brink of falling. Within moments of the game starting - as all hell breaks loose around you - you’re casually stopped by a stranger who appears to have taken an interest in your plans. After firing a series of situationally inappropriate questions at you, the conversation abruptly concludes with, “Well, this is no time for idle chat.” Indeed. Admittedly, that initial dialogue's purpose is to contribute to the fairly robust character creation feature, but in context it just doesn't make sense. Sadly it more or less sets the standard for the scripting and story to follow. Regardless of your responses, the city is defeated and your character is knocked unconscious. You wake on a train owned by a mercenary gang called the Mobile Corps. It’s here the plot - for what it’s worth - starts proper. You’re introduced to various characters including Arietta, a young woman who is essentially convinced you’re special; and Cassius, who’s the leader of the group. He assumes the role of quest-giver, and when the train is attacked he sends you out with three others to deal with the threat. There’s just enough time for a character to note the fact you’ve “never been in a real battle” before you find yourself inexplicably leading your new acquaintances into combat. It's the speediest and most unfathomable transition from walking wounded to senior ranking officer since Kirk's rise to the captaincy in the 2009 Star Trek film. Combat is real-time and is mostly an X-tapping affair, with the D-pad used to cycle through various attacks. It’s quite a smart interpretation of an MMO’s hotkeys, and considering it’s predominantly tedious button mashing in tedious settings with occasional tedious dialogue, it actually works rather well. Slashing your way through room after room of dull, recycled environments is enlivened somewhat by a kind of Power Rangers mechanic, which sees you and your three colleagues use Optimite Crystals (which are powered by the soul’s energies) to transform and attack your foes. It’s a powerful change: in this state, even bosses fall quickly. At times it can all be a little too easy, especially if you allow your teammates to do more than their fair share of the heavy lifting. The train acts as a command centre or hub, and each car serves a different purpose: the control car is where Cassius assigns your quests, the barracks car is where your constantly expanding crew hangs out, and so on. The presentation of the various options on the train is clear and easily navigable. Menus are designed as well as could be expected in transitioning to the small screen, and although the early tutorial is a bit of a text avalanche, it does the job. Off the train, there’s little to be said for the overall aesthetic. Bland, lifeless scenery is reused quest after quest. There’s nothing to pique interest, to drive the player to explore. Criminally for a JRPG, character models are wholly uninspired, there's not a memorable one among them - there's barely even a striking fashion choice or haircut. And the music is a constant irritation, a relentless Japanese interpretation of the soundtrack to a low-budget King Arthur TV series. The interchangeable AI buddies who follow you around on quests can be replaced by up to three people in co-op play. This certainly adds a further dimension to the game, but it doesn’t radically change the experience, and finding friends to come along for the ride might not be particularly easy. Matrix claim the campaign will provide around 30 hours of gameplay. To be fair, the linear structure and short quests lend themselves well to the PSP, with bursts of play on the bus or train being entirely achievable. But ultimately the lack of an engaging plot and the repetitive nature of the level design result in a superficial and unfulfilling experience. There’s definitely some appeal for players who like a grindfest, and it’s by no means the worst JRPG ever to hit the shelves, but for the someone who isn’t already a fan of the franchise it’s a difficult title to recommend.

It’s like Christmas come early for fans of White Knight Chronicles with both a portable title and a PS3 sequel being released on the same day. Matrix Software have opted to remove themselves from the continuing story of the console titles, setting Origins many thousands of years prior to the original game, right in the middle of a series of battles known as the Dogma Wars. Boasting four-player co-op, MMO elements and a lengthy campaign, Origins seems like a fascinating concept on paper. But ultimately a non-existent plot, sub-par presentation and repetitive gameplay conspire to undermine the developers’ ambitions.