Big, dumb, and a whole lot of fun. 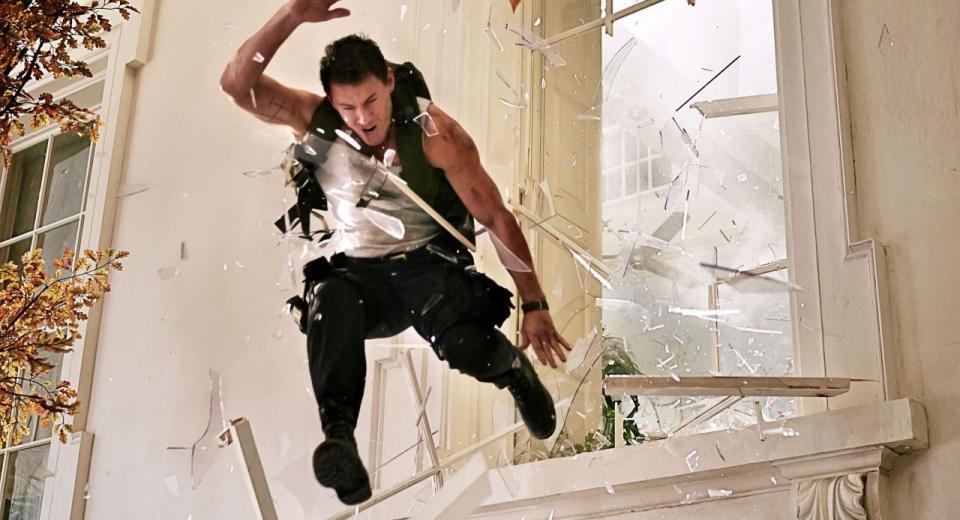 It startled like any other day: you’re waiting and waiting at the cinema and then, all of a sudden, two Die Hard in the White House movies come along at the same time. Coincidence? Methinks not. Two movies about tough-ass supercops practically single-handedly assaulting a locked-down tower-block full of armed mercenaries (Dredd and The Raid) being released at the same time? Sure, I can just about buy it. But Die Hard in a White House is just too specific. It has to rank alongside two Westerns about Wyatt Earp, about asteroids threatening to destroy the planet, about volcanoes erupting and about trouble on Mars – all being released within months of one another – as another one of those prime examples of potentially mutually-destructive intra-Hollywood competition.

By all accounts the Gerard Butler / Morgan Freeman / Aaron EckhartOlympus Has Fallen – the first out of the box (always an advantage) – was pretty enjoyable. But I’m still waiting to see it. So, probably quite atypically, I got to see White House Down first; the Channing Tatum / Jamie Foxx / James Woods collaboration, directed by Roland Emmerich. And it was really big, unpretentiously dumb, and a whole lot of fun.

In case you haven’t figured it out already, the story is about an attack on the White House. This time, however, the terrorists have got an inside man: the President’s own head of Secret Service, who is on the eve of his retirement and thinks it best to go out with a bang. Taking the President hostage, he systematically takes out all of the threats to his devious plan with the help of a tough mercenary team that are only in it for the money. He has bigger fish to fry, however.

In case you haven’t figured it out already, the story is about an attack on the White House. 
Made a decade ago, with Bruce Willis on the hood and John McTiernan in the driving seat, this could have been classic Die Hard entry. That time has passed, though, and these days things need to be bigger, louder, and more PG-13. Enter Roland Emmerich, who appears to have made a career about destroying US landmarks. Sure, he did the thoroughly engaging Mel Gibson period actioner The Patriot, as well as the first Universal Soldier film, but he’s best known for his sci-fi blockbusters Stargate and Independence Day, and his blockbuster disaster movies Godzilla, The Day After Tomorrow and 2012. Indeed, White House Down actually marks the third time he’s taken out the President’s palace.

Here he takes to the familiar Die Hard territory with aplomb, producing a kind-of sub-The Rock actioner with plenty of explosions, crashes, helicopter assaults and terrorist fodder. Indeed, whilst I normally disparage at the more whimsical ‘humour’ that he injects into some of his flicks (I’m going to call it the Jar-Jar factor, even though it’s seldom as bad as what Lucas is capable of), here he genuinely appears to be capable of not only crafting a few laughs, but also laughing with us at certain frivolities. Critics may complain that the only way to truly enjoy White House Down is by regarding it as nothing more than a parody, but I think Emmerich has injected just enough self-awareness to get away with it without lapsing into complete parody territory.

Because it doesn’t take itself too seriously, I ended up enjoying the straight action and blockbuster thrills – it’s almost as if the complete lack of pretentiousness made me forgive the script its flimsy nature, and simply get swept up in the entertaining thrill of it all. I don’t think I could have disliked this movie even if I tried; it may not be A-grade action, but it’s certainly blisteringly bombastic B-movie excellence. Channing Tatum (Haywire, 21 Jump Street) is also pretty well cast. It’s not like he has to show off any acting chops here, but he’s focussed instead on being just plain charming, slipping right into that everyman hero slot that Willis vacated a couple of Die Hard movies back after he unfortunately graduated to supercop. He doesn’t own the role, or make it a particularly distinctive one (mind you, the film doesn’t lend itself towards being made into a franchise, and, at a cost of twice as much as Olympus has Fallen, and a Box Office draw about equal, it’s ended up being the loser out of the two anyway) but he’s good enough to pull you along for the overlong two-plus-hours duration.

Jamie Foxx struggles as the President, not only feeling utterly wasted in the role, but also a little out of place. He’s still too effortlessly cool, so when it comes to actually being Presidential, he doesn’t quite nail it; and when it comes to kicking ass – like Harrison Ford’s President did in the, again, similarly-themed Air Force One – he aims for ‘inexperienced’ instead, and hits ‘hapless’ squarely on the head. James Woods is also slightly wasted, reduced to barking and growling, although he’s nevertheless more than capable of chewing the scenery with the best of them. Indeed, all of the supporting cast deserve better – Jason Clarke (excellent in both Zero Dark Thirty and Lawless); Maggie Gyllenhaal (excellent in both Secretary and Crazy Heart) and Richard Jenkins (excellent in almost everything but, most recently, Killing them Softly and The Cabin in the Woods) – but, at the same time, they do manage to somehow lend the movie an extra level of credibility. It’s not enough to make you rave about it, but it does give strength to the otherwise fragile framework.

Personally, I thought the film fell down a little in its unnecessary build-up. You know this is going to be a fairly silly, over-the-top action flick about one man taking on seemingly infinite terrorists in the White House and its surrounding grounds, but Emmerich tries to work it against a heady backdrop of almost-signed peace treaties and potential disarmament; juxtaposed with angry Private Military Contractors and weapons manufacturers who’d prefer to see the simmering conflict in the Middle East boil over ad infinitum. It’s all topical, relevant geo-political guff, but neither particularly weighty nor particularly necessary, and it somehow makes surviving all the way through to the end run (over two hours later) an unnecessarily arduous journey. Oddly, regularly – justifiably – criticised director Michael Bay managed to strike just the right balance on this count with his best feature to date, The Rock, but Emmerich aims for a far more lightweight affair, which basically negates the potential for having an effective political backdrop.

Ultimately, however, the movie succeeds and fails on action and action alone. It doesn’t knock it out of the park, but – once it gets going and landmarks start blowing up – it jostles along with thunder and fury. Indeed the biggest letdown in this area is the clear censorship required to get it in under the PG-13 / 12A cut-off. The sizable budget meant the lower rating was a necessity (even though, ironically, it didn’t pay off – with the 15/R-Rated Olympus Has Fallen pulling in the same numbers), but it also fractures some of the potentially more brutal latter-end confrontations. Hands flurry around, people get hit in ways you can’t quite see, and bodies end up unconscious, bloodied, or even dead and you sometimes don’t quite know how. Hell, I think it’s the first time I’ve seen anyone have a bloodless death via .50 Cal. But if you can swallow the madcap editing and mildly unsatisfying violence, you’ll still enjoy the impact of the rest of the action; and, laced with plenty of self-aware humour, the whole think becomes an occasionally immensely fun ride. By all accounts everybody takes things a whole lot more seriously in Olympus Has Fallen so, if that’s your thing, then be aware that Emmerich and co. don’t go down the same route. If, however, you’re prepared to get swept up by the massive-scale blockbuster bombast; seemingly boundless frivolity; and genuinely fun, dumb, action, White House Down may just be for you.