Step away from the soundbar 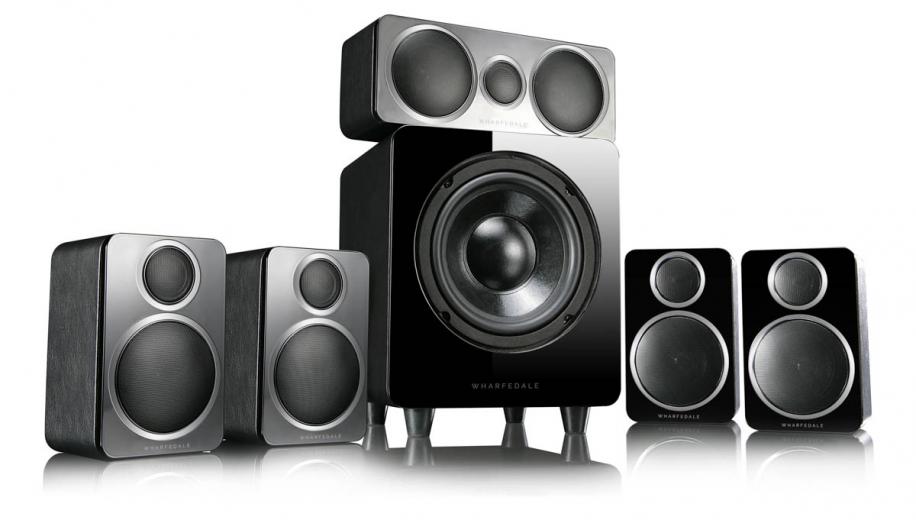 What is the Wharfedale DX-2?

The Wharfedale DX-2 is a 5.1 speaker package and thus something of a rare breed in 2018. Coming in at £450, it is very clearly intended to contest parts of the market that many rivals have conceded to soundbars (and more often than not, proceeded to build one themselves). Paired with an affordable AV receiver, the Wharfedale could be part of a system for £700 which is pretty impressive judged by the pricing of a lot of the competition.

On the face of it, there’s a lot to be said for this approach. Your upgrades can be staggered rather than chopping the whole thing in and the DX-2 offers the promise of real surround rather than an approximation of it. The speakers themselves (as we shall cover) are compact and this shouldn’t be too challenging in most spaces. It’s easy to see the appeal of real AV over a simpler boost to your TV speakers.

Of course, the important question is just how much surround package can £450 get you? What has Wharfedale had to cut out, omit or sacrifice to get the DX-2 out the door for the money? Is the reason why this part of the market is now dominated by one box solutions because it simply can’t be done? Time to find out. The Wharfedale is a sub sat based design with four upright satellites, a dedicated centre and a small active subwoofer. The satellites are very compact indeed with a height of only 19cm. What is notable therefore is that each speaker is a true two way design with a 19mm silk dome tweeter and a 75mm woven polypropylene cone. This configuration has been key to how Wharfedale has designed and built speakers for at least the last decade and the DX-2 is part of this system rather than something tacked onto the end.

The centre speaker is clearly closely related to the satellites. It is effectively a ‘cabinet and a half’ type design with a second 75mm driver added to the cabinet. The arguments over the use of dedicated centre speakers will run and run but with a speaker cabinet of this size, I think it will help matters. The amount of information normally contained in the centre channel of the soundtrack sufficient that having an ‘anchor’ that manages this information is going to be useful in a speaker package of this size. The subwoofer that partners these speakers is a compact design with a forward firing eight inch driver powered by a 70 watt amplifier. In a world of 1 kilowatt monsters, it might not sound terribly exciting but the reality of its execution is rather more positive than you might expect. You get an adjustable crossover (never a given at this price point), phase switch, stereo input and an auto on/off switch that can be bypassed (and that seems to work pretty well too). Given that this is going to be doing plenty of work in a system of this nature, this is very much a good thing.

These speakers aren’t huge and Wharfedale quotes a fairly honest sounding lower response of 110Hz being available at +/-3dB with 100Hz being available at -6dB. This means you will need to put a little thought into how you set the DX-2 up to get the best out of it. That sub will be at least partly directional so it will do its best work on axis with the front speakers – particularly for music. Helpfully, this is made easier by the cabinets being sealed and something you can wall mount without too much issue and the sub is also fairly easy to place. At £450, Wharfedale would be well within their rights to wrap the DX-2s various drivers in a container robust enough to stop them falling onto the floor and be done with it. That it feels (a lot) better than that is testament to the engineering and manufacturing clout that parent company IAG has.

The satellites are finished in a manner that balances two slightly disparate requirements very well. They manage to feel like they have elements of design and styling to them while remaining usefully unobtrusive. The use of a gloss front panel is smart and the chrome rings avoid everything feeling a little overly black (a white finish is due too). This is then partnered with a faux leather surround for the cabinet. I can’t pretend to love this – I don’t really like actual leather on speakers – but it helps to make the DX-2 feel like something more than a ‘rubber mat’ product. You could be slightly critical of the grills being non removable but, honestly, I’m not sure how many people are going to want to remove them. No less importantly, it all feels well assembled too. The cabinets are roughly a kilo each (with the centre being a little more) and this is sufficient to make them feel like a meaningful assembly and points of contact like the speaker terminals are of good quality and should work with the majority of cables that the DX-2 is likely to encounter. The subwoofer manages to deal with the standard issues of small affordable subwoofers well. The cabinet avoids any unpleasant resonances and the feet are sufficiently pliant that it stays put when you crank it up.

The long and the short of it is that this is a pack that feels more than worth the asking price. Crucially, it has he measure of most rival soundbars and shouldn’t – cabling not withstanding – present a significant challenge to get in and running. It also shouldn’t be too much of a challenge to most AV receivers to drive. The satellites are quoted as having sensitivity in the mid eighties which isn’t bad for a speaker of this size assuming a largely eight ohm impedance. How was the DX-2 tested?

The Wharfedale was placed on a combination of Soundstyle Z2 speaker stands, a Quadraspire QAVX rack and the floor (sub). It was connected to a Yamaha RX-A3040 AV receiver with a Cambridge Audio 752BD Blu Ray player and Sky HD acting as source and a Panasonic GT60 Plasma acting as the screen and supplying Netflix and Amazon as further sources. Test material has included Blu-ray, broadcast and on demand material as well as some FLAC files and Spotify via the Spotify connect function in the Yamaha. As the review sample appeared to have done plenty of running before it arrived here, I haven’t put a huge amount of running in into the DX-2 and as the behaviour of the speakers hasn’t changed in the time it has been in use suggests that it is behaving as it should. I’m pleased to report too that the behaviour in question is very, very positive.

First up, the Wharfedale does the one thing absolutely crucial thing that a sub/sat system has to do in order to work and that is that it integrates the sub and the speakers correctly. With the crossover of the sub bypassed and a 100Hz one running in the Yamaha (I did briefly try a 120Hz one but feel that a 100Hz one works better even allowing for a roll off in the output from the satellites), the performance is extremely cohesive. I re-watched Sleepy Hollow with the DX-2 in place and the way that the DX-2 renders the woods from where the horseman emerges is really rather impressive. There’s plenty of low key detail in the mix and those little satellites do a fine job of rendering it.

They also show excellent tonal balance. The driver materials in use in the DX-2 are hardly the stuff of science fiction but they serve as a welcome reminder that the classics work well. Early on in the film, there’s a short (but effective) cameo from Sir Christopher Lee. With the DX-2, even with your eyes closed, the output of the centre speaker is very much Christopher Lee. The presentation is refined, detailed and continuously engaging.

There are limits of course. Even on the end of the capable and unflappable Yamaha 3040, the Wharfedale has a very clear comfort zone in volume terms and pushing too hard will result in it starting to harden up and become somewhat brittle. Watching the catacombs sequence in John Wick 2 at a loud level comes across as a bit breathless and constrained. This being said, in a normal lounge, listening at more day to day levels, the results are still very entertaining. Interestingly, the sub has more poke in it than the satellites do. For a fairly small and sanely powered box, it has no trouble giving you some decent bass extension and staying cohesive and together even with fairly complex material. The good folks of SVS are unlikely to stop making their instruments of destruction when confronted with it but after a week in situ, it is very clear that plenty of effort has been expanded on it.

Where this effort really shows for me is when you switch over to general TV viewing – conducted at rather lower levels and with less sophisticated soundtracks than on movie night. The Wharfedale is a truly excellent partner for this day-to-day material. It sounds spacious, refined and convincing across pretty much anything you might choose from the visual insanity of Britannia to the eyegasm of The Grand Tour. The latter gave the DX-2 the chance to show off the tonal realism it has by doing a fine job of capturing the effort that had gone into recording the Jaguar XKSS and Aston Martin DB4 Lightweight. The sheer array of mechanical noise from the Aston in particular is superbly rendered and very immersive. The single biggest accolade I can give the DX-2 is that I don’t feel compelled to re-watch anything once it had been re-boxed.

Used in 2.1, the DX-2 is capable if not as capable as using a straight pair of stereo speakers. Listening to The Thread That Keeps Us by Calexico, which is well produced and tonally accurate, that slight dip in output where the sub finishes and the sats really come into their own is noticeable (but again, for me at least, preferable to the 120Hz crossover setting). There is a very good stereo image though and the sub is light enough on its feet to deal with complex basslines without getting slow or wallowy. I suspect that the critical aspect of judging the DX-2 is that no AV solution (soundbar, HTIB etc.) that I’ve listened to recently sounds better. My time with the DX-2 has been illuminating. In so many ways, this is not a radical system – it is very similar in concept and execution to the old Mordaunt Short Premiere systems which I used to provide technical support for over fifteen years ago. There’s nothing here that is in any way revolutionary… but… it doesn’t stop the DX-2 being seriously good.

Partnered with a decent affordable AV receiver, this is a package that doesn’t do a convincing facsimile of surround, it instead offers honest to goodness home cinema thrills at a more than sensible price. It does this while taking up very little space and being perfectly up to the job of working in most decors. If you can handle a moderately more complex cabling arrangement than would be required of a soundbar, then the Whafedale DX-2 shows that there is a whole world of fun you can get in on and for that reason this bargain box of brilliant is an indisputable Best Buy.