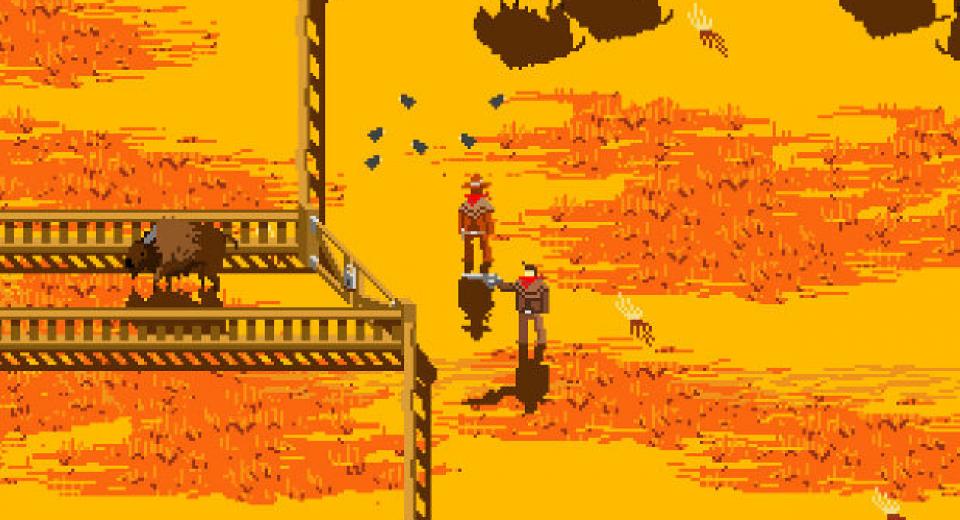 The gaming landscape is subtly changing; not the monumental, cataclysmic tidal wave purported to be sweeping all and sundry away from the traditional, bedroom-bound, daylight-shunning stereotype that it arguably never was, but the rise and rise of so-called “casual” titles has certainly made its mark. Small, bite-sized experiences available for download for a very affordable sum were to be expected, but the world of browser-based offerings shouldn’t be underestimated either - the wheat to chaff ratio may be relatively poor due to the sheer number available, but the increasing vision shown by those who choose to properly explore what can be achieved is extremely heartening. One such example of the flash-powered line where casual accessibility meets traditional gaming goodness is Westerado.

Developed by Ostrich Banditos and available to play on the Adult Swim site here, it manages to combine the easy to jump into appeal of meta-games found on websites with all the hallmarks of geekdom, primarily driven by the eight bit style pixelated graphics and taken to the power of ten when combined with a kitsch lo-fi Western theme, complete with hammy script and all. In essence it’s a top-down exploration game bearing the trappings of a simple Action-RPG. You’re cast as an innocent rancher’s son, cruelly thrown into a quest for vengeance when your ranch is burned down by some nefarious soul who leaves you to discover your mother dead and your brother on his way to meet his maker. The dark early tone is soon lightened though once you realise the path to finding the elusive figure behind the slayings isn’t a straightforward one. What unfolds is a game of Guess Who, as no one can identify the man, but by completing tasks for the townsfolk they’ll handily give you a clue as to his identity, such as the size of his hat or the colour of his trousers.

What’s refreshing is your ability to start the accusations of murder from the offing. It’s hard to pick out a shifty figure amongst the lo-fi animations, but if you want to throw accusations around or let your guns do the talking you can do so. So many mini mission-based RPGs with a central objective seek to funnel you down a corridor, masquerading as open worlds but limiting the scope of your actions. Westerado lets you burst through those saloon doors blazing in your vendetta. It won’t get you far, but it is fun and teaches that your actions will have consequences. As soon as you find you can draw your weapon whilst talking to people, you’ll likely do it to get a reaction because, well, why wouldn’t you? Then, when you’re gunned down by a woman with a shotgun in the middle of the street your first lesson is learnt. The controls are a breeze, a standard WASD combo for movement, J to draw your revolver and K to both cock its hammer and fire. Shift to run kinda spoils the mood, which is the biggest draw of the game. Perhaps it’s a title that’ll appeal more to those that have fond memories of such simple graphics, but if you’re of a certain age it’ll soon lose its “ooh isn’t it funny how knowingly dated it all looks” novelty. Bullets are infinite, but must be reloaded singly back into your pistol once it’s spent. Doing so takes a brief moment and thus the formula of timely reloading is put into place. Health is governed by the hats seen on your HUD, a gun in the top left of your screen which displays the status of your arm - cocked or not and number of rounds in place.

Combat proves addictive, but mainly because of the stellar atmosphere. It treads a fine line between the hammy nod-and-wink of highlighting in an appreciative way the core two-dimensionality of games of yesteryear and at the same time embracing those roots. If anything, the music slightly betrays the game’s overtly eight-bit charm by being so impressive. No midi ear-worms here, just pleasantly authentic Western guitar strums changing to indicate danger. The main quest revolves around basic do-this do-that missions, but you’re free to wander, shoot bottles and hunt out bandits to your heart’s content, meaning an hour or so’s content can quickly become a couple. Walking slowly into a camp of outlaws, pinching a sack of money to trigger their outrage and bloodlust, then gunning them down soon becomes something you seek out. And you need to meander to take in all the neat little touches that have been dotted around to flesh out this blanket of chunky pixels. The scorched ground, the trees casting their spidery shadows, the nooses that hang from the boughs, the vultures picking over the remnants of carcasses and finally the bodies you’ve slain, resting where they fell.

It’s a small game, with no progress saves, but unlike many browser offerings, it’s very much a game in every sense of the word, complete with a miniature world to explore, and when the cost is the same as a five-fingered discount, you’ve no reason not to give it a try.

A Fistful of Dollars

A pocket full of pennies

Westerado is an atmospheric gem. Whether you view it as a stripped back old-school Western-inspired mini RPG or a fleshed out series of odes to gaming past, it’s more than a set of pixellated vignettes, it ties together nicely as a whole thanks to a world that’s been lovingly created. Get past the kitsch graphics and what lies beneath sidesteps any cries of style over substance, offering the perfect kind of free online title - engaging and fun, easy to jump into and an experience you want to eke out beyond its meagre quest time. Happy hunting.