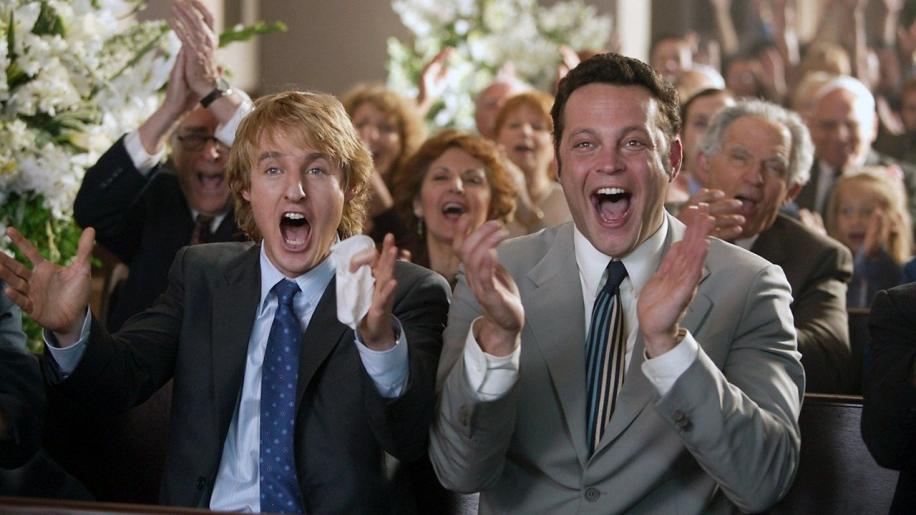 Wedding Crashers has not a bad picture for the most part although it does fluctuate occasionally and is presented in a theatrically correct aspect ratio of 2.35:1. The fluctuations consist mainly of the level of grain present. One moment you are watching a beautifully clean image, the next it appears to be snowing the grain is so prominent! This is most visible during chapter 12 where the group disembark a yacht and the level of grain changes from one shot to another. Besides this sporadic concern, the image quality is very good. Edge enhancement is very low giving a wonderfully natural, yet crisp look especially to outdoor scenes.

Colours are vivid and bright, yet accurate at the same time. The locations used are naturally dramatic and are filled with lush greens and opulent reds. These rustic colours contrast well with the lavish tones of the wedding attire and décor. A movie filled with wedding tuxedos demand good black levels and here the image is more than up to the challenge. Blacks are deep and dense with not a hint of greyness in the tuxes yet you can easily differentiate between Jeremy's charcoal black suit and John's slightly bluer tinted one.

So the image here is very good and only marred by the sporadic high level of grain present. The bitrate level is also a little on the low side at just 6.18 Mbps, but then again, this is a movie where you probably wouldn't notice much of these criticisms anyway as you'll be lolling your head back with laughter for most of it!

A Dolby Digital 5.1 soundtrack is available here and it offers a satisfactory experience rather than anything exceptional. This is after all a dialogue heavy movie so surround effects, LFE and other system challenging audio treats are fairly thin on the ground. But thankfully, dialogue is rendered very well indeed. Voices are very clear throughout and possess a very warm endearing tonality to them. Of course, the jokes wouldn't work unless you are able to hear every word of them and the centre channel information does seem to be set slightly louder than usual to ensure this.

The surrounds are used to create ambience such as within the wedding receptions and churches and are present without actually drawing attention to themselves. This gives a nice 'airy' feeling to the soundtrack as you hear the guests chatting in the background and the priest's oration echoing off the church walls.

A large part of this soundtrack is the music, both as an intricate part of the film such as the band playing at the reception and the incidental music such as the track by The Sights played in the background. Both types are blended into the mix very nicely, either as a backdrop to the dialogue or brought to the fore in a much more prominent way. Again, the sound here is nothing out of the ordinary, but is by no means uninspiring and is more than acceptable for the movie.

First off we have 4 deleted scenes (7:22mins) which consist of 'Cleary Tests John' where Senator Cleary calls John into his office and shows him a letter that he intends to submit to the President and asks John his opinion on its content as a test to see if John is really genuine or full of the proverbial. The second scene is titled 'Jeremy Consoles John' and shows Jeremy chatting to John just after John is punched by Sack. This one is very short and is a slight extension to a scene already present in the movie. The next deleted scene is another extension of a scene within the film titled 'Bluefish' and is centres on John and Jeremy ridiculing Sack as they come ashore from the yacht. Finally for the deleted scenes is the '99 Red Balloons' scene set during the Oriental Wedding and features the two men doing a (very bad) karaoke version of 99 Red Balloons which the Director felt just 'didn't fit in' with the rest of the movie.

Following on from this we have the option of two Audio Commentaries. The first is with our two leading men, Owen Wilson and Vince Vaughn and the second with Director David Dobkin. It goes without saying that the more entertaining of the two is the first with Owen and Vince and the more informative is the second. The first is a little slow even with the comedic banter of the two stars but the second will put you to sleep with the monotone voice of Dobkin. He may have much to enlighten us with, but his delivery and his tone is very dull and I became very bored very quickly.

Then we have two featurettes; The first is titled 'Event Planning' (11:36mins) and takes a behind-the-scenes look at the logistical nightmare that creating so many different wedding scenes brings. How they hired a real Wedding Planner to give advice on accuracy and how all the costumes had to be made including all the many wedding dresses involved. The second featurette is titled 'The Rules' (7:28mins) and finds Owen and Vince talking us through the many rules of wedding crashing and how most are improvised as you go along. For instance “Rule No.5 - You're an idiot!” You can make a point and then add a rule number to give it legitimacy.

The next feature is 'The Rules of Wedding Crashing' which follows on nicely from the 'The Rules' featurette and is a text based feature listing all the rules for all of us budding crashers to learn. There are 24 pages of rules reached by pressing the 'next' button on your remote. My favourites include: “Rule No.10 - Rules are for pussies!” and “Rule No.13 - Bridesmaids are desperate...console them!” I enjoyed this section and laughed plenty at the wickedly funny 'rules'.

Two trailers for the movie are next, the theatrical trailer and a teaser trailer and finally we have a section titled 'Soundtrack' which lists all the songs throughout the movie and allows you to jump straight to the particular scene containing a song and there is also a music video by a band called The Sights singing a track called 'The Circus' which is featured in the movie.

That is all the extras and are a nice addition to a funny movie which allows a few more laughs after the final credits have rolled. You can also watch the theatrical version of the movie but I really do not see the point of missing out on the extra stuff the 'Uncorked' version has to offer.

Wedding Crashers IS a funny movie. It blends innuendoes and vulgarity with more run of the mill and tame humour to great effect and the very different character of the two lead actors play against each other perfectly. But the humour may not be to everyone's taste and whether it is a keeper or a renter is debateable. I for one enjoyed watching it but wouldn't be in any hurry to sit through it again any time soon, although, with the holiday season upon us, this may be just the movie to get everyone into the party spirit. Now who do I know that's getting married soon?