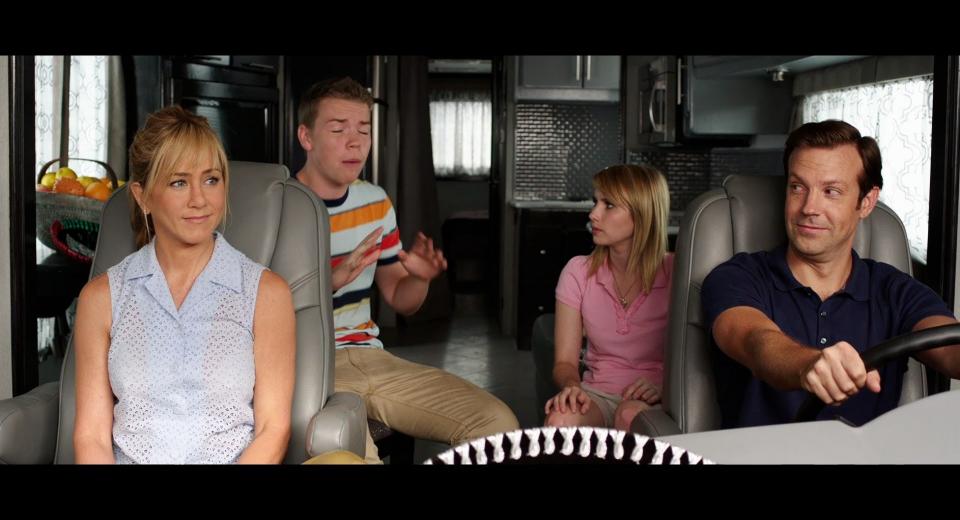 Jennifer Aniston really should think about getting a new agent because despite being a very capable comedienne, her film choices have been terrible. Since Friends ended she has, almost without exception, picked one stinker after another. So much so that she’s more famous for exercising and who she’s dating than she is for her acting. We’re the Millers is a step up from most of her previous films but that really isn’t saying much and whoever thought Jen should play a stripper, really missed the appeal of Ms Aniston.
We’re the Millers centres around David Clark, played by SNL’s Jason Sudeikis (we can’t pronounce it either), a low level pot dealer who gets robbed at the beginning of the film. In order to pay off his debt to his boss, played by Ed Helms (The Hangover, The Office) he has to smuggle a load of marijuana over the border from Mexico. So as not to raise any red flags with the border guards he hits on the idea of creating a fake family, yes you’ve guessed it - The Millers.

He ropes in aging stripper Rose O’Reilly (Aniston) to play the role of the mum and two teenagers to play the kids. One is a runaway called Casey Mathis, played by Emma Roberts, daughter of Eric and niece of Julia. The other kid is Kenny Rossmore, who lives in David’s apartment block and is played by British actor Will Poulter (Son of Rambow, The Chronicles of Narnia: The Voyage of the Dawn Treader). Poulter not only pulls off a believable American accent but he easily steals the movie and most of the best laughs revolve around him.
They set off across the border in a huge RV, pick up two tons of weed and the rest of the film revolves around their efforts to get back to Denver without getting arrested or killed. The plot is very generic, with no real surprises and the usual cast of dodgy Mexican drug dealers played in the case by Tomer Sisley and ex-NFL player Matthew Willig. Along the way they meet a Mexican cop, played by the always good Luis Guzman, who requires a rather unusual bribe that delivers some decent laughs at Poulter’s expense. They also hook up with another family in an RV played by Nick Offerman (The Kings of Summer) as the dad, Kathryn Hahn (Anchorman) as the mum and Molly Quinn as their daughter.

The arrival of the second family allows for some jokes about swinging and a romantic subplot between Quinn and Poulter but we also discover that - surprise, surprise - Offerman’s character is a DEA agent. It’s the predictability of the plot that makes the film so average and if you think that the fake family will end up behaving like a real family then you are, of course, bang on the money. The presence of Offerman’s DEA agent also allows for all the lose ends to be tied up and the coda sets up a fairly obvious sequel if it wasn’t for the fact the new Luc Besson movie The Family (with Robert De Niro and Michelle Pfeiffer) seems to cover similar ground.

The general lack of originality could be tolerated if the film were very funny but with a few notable exceptions the jokes are rather average and all the best ones are in the trailer. Too often the comedy seems forced with most of the jokes being either obvious or crude and the film largely depends on the likability of its cast. This is where Sudeikis, who at least is charming, and Poulter, who goes balls out (literally) for the laughs, win. Sadly Aniston seems totally miscast as the most unlikely of strippers but there is a scene where she can at least show that all that exercise hasn’t gone to waste. Roberts meanwhile seems less like a runaway and more like a spoilt brat, a performance that didn’t seem to require a lot of acting.

It’s never a good sign when you’re watching the opening credits and you haven’t heard of any of the creative talent behind the camera, so our hopes weren’t high. The film was directed by the improbably monikered Rawson Marshall Thurber, who also called the shots on the much funnier Dodgeball, so he can at least deliver when there’s a decent script. Unfortunately that’s where Rawson is let down and the presence of four different writers, who between them were responsible for Wedding Crashers and Hot Tub Time Machine, isn’t particularly encouraging. In fact the film’s best joke happens at the end when, in classic Smokey and the Bandit fashion, various bloopers are screened. In one of them the cast switch the tape from TLC’s 'Waterfalls' to The Rembrandts 'I’ll Be There For You' and sing along, much to embarrassment of Aniston.