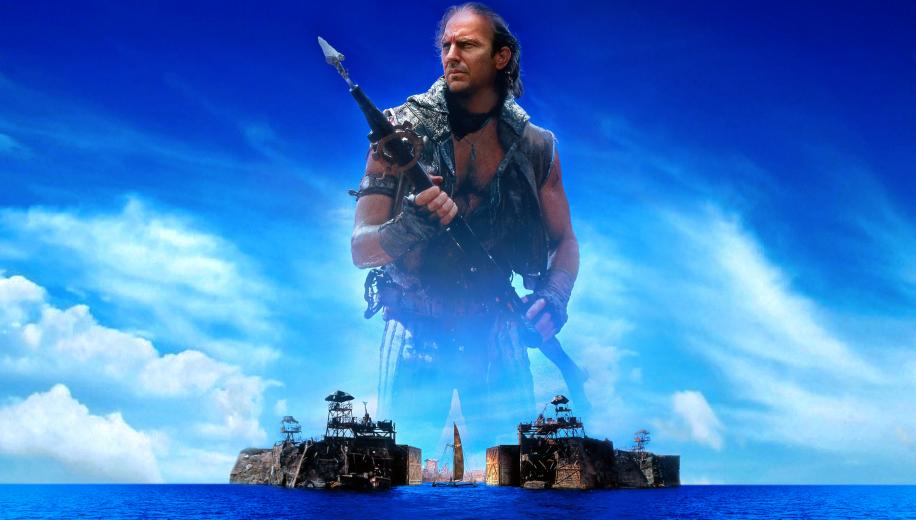 Much maligned, Costner's Waterworld may have bombed, but its legendary 3 hour Ulysses Cut makes for a flawed but still very enjoyable Mad Max-on-water epic.

Working on water is just asking for trouble (although working on sand nearly proved the end of Mad Max: Fury Road), and the production of Waterworld got plenty, reuniting director Kevin Reynolds and Star Kevin Costner for the third time, seeing its $100 million budget almost doubled due to issues during the shoot - not least a hurricane - and Costner proving so demanding that script re-writer Joss Whedon reportedly found it hell and director Reynolds left the film to his star to finish shooting.

The premise was a great (if very familiar - *cough*Road Warrior*cough*) idea - positing a similar post-apocalyptic future where resources are scarce and survivors are scavenging for every last scrap, with focus on a drifter on his kitted-out craft who gets caught in a battle between a violent petrol-head gang and an 'innocent' commune. The major initial difference here is the set-up of the polar ice caps having melted, water drowning the earth, and the action shifting from road vehicles to water vehicles - which actually makes for a surprisingly original experience (c.f. Avatar's take on Dances with Wolves). Indeed, the water-based spectacles alone were enough to spawn a number of Universal Studios Waterworld Experiences around the world.


A rollicking - and now truly epic - water-based action-adventure unlike pretty-much anything before or since.

The new three hour cut (which is largely the 3 hour TV cut, only here without any censoring, and all the action and violence left in) is far more than just this premise, however, enriching it with a more complex portrayal of its lead character, his skills, his abilities and his discoveries, as well as taking us across vast swathes of open water, with Costner and a Basic Instinct-era Jeanne Tripplehorn afforded a much more indulgent period of runtime to clash and exude chemistry, whilst exploring the breadth and depth of the ocean that now pervades the land.

Unfortunately, the late Dennis Hopper, despite chewing the scenery with all his might, still has a ludicrous and wholly undeveloped snarling villain role (compare with his equally chewy but much more interesting antagonist in the previous year's Speed) that isn't particularly expanded or explained here, but that's ok, this is just Mad Max: The Road Warrior reworked on water after all, and embraced with that in mind, it's a rollicking - and now truly epic - water-based action-adventure unlike pretty-much anything before or since. Arrow bring Waterworld back to Blu-ray with a stunning 3-disc set, expanding on the previously-announced 2-disc version to afford each of the three cuts of the film their own individual Blu-ray disc. Better still, not only has the core theatrical footage been given a 4K remaster, but it's actually present on all three versions, with the Extended TV Cut and the Ulysses Cut both merely having additional - admittedly sometimes lower quality - footage woven into the 4K remastered core, which, excepting this footage, makes for a very impressive 1080p/AVC-encoded High Definition video presentation framed in the movie's original theatrical aspect ratio of 1.85:1 widescreen.


The footage from the 4K-remastered 35mm negative looks frequently exceptional.

The core footage (from the 4K-remastered original 35mm camera negative) looks frequently exceptional, boasting that wonderfully filmic sheen that comes courtesy of a light but pervasive veil of fine grain, lapping up some impressive detail, not only on close ups - where skin textures, wear and water-mottled hair are finely observed - but also in the mid and long-range shots. Even though it clearly wasn't easy (or cheap) to get some of these on-the-water shots, the end result is frequently striking, and there are a couple of real stunners (Hopper's gang riding in silouetted in the low sun is a great shot).

The colour scheme has been faithfully rendered, black levels remain stable and strong; rich and deep throughout with little sign of faltering, and overall it's exactly what you would expect from a decent 4K remaster job. The flip side should come in the extra footage on the new cuts, but actually some of the additional 35mm intermediary footage has been rendered quite impressively too, particularly since the really poor footage really stands out - including a couple of shots at the end that look positively video in quality. Still, considering the Theatrical Cut - by comparison - is excellent in this 4K remaster; arguably demo, and certainly a considerable step up over the previous incarnations, the picture really can't be marked down for the quality of a few select moments on the two additional cuts included. Waterworld is likely never going to look better than this; well, at least until the 4K-remastered Theatrical Cut eventually gets its own 4K release. Arrow have afforded all three versions dual audio options too, with DTS-HD Master Audio 5.1 and 2.0 options on each, and although an immersive HD audio Atmos remix would have been a nice bonus, even the old Blu-ray's audio track was impressive, with these options providing a fair amount of immersion particularly in the more expansive setpieces.

There's a frequent feeling of pervasive all-around water enveloping the environment (come the end, you can see why Costner's character feels uneasy about the change) and the water-based action has a different dynamic feel to it than similar land-based events, with jet-ski's engines substituting for growling cars, and the (reportedly working) trimaran an impressively kitted-out piece of machinery. There's still roaring and rattling light aircraft noises, and some suitably thunderous weapons fire - not least the mounted gun on the big barge ship that plugs shell-sized holes in the atoll.

Dialogue remains well-prioritised throughout, and perhaps the only disappointment may come from the alternate cuts, where additional footage frequently suffers a noticeable lapse in quality, but this only further highlights the strength of the core audio and is clearly forgivable in what is a largely demo offering. Although split into three discs, the majority of the extras are featured on the shorter Theatrical Cut disc, and with the other cuts 40 minutes longer, this is understandable. The extras package is one of the most impressive elements on Arrow's lavish box set - as is often the case for the boutique label - and here it comes headlined by a new feature-length 100+ minute Documentary, Maelstrom: The Odyssey of Waterworld which has almost all the key players involved (albeit with only archival input from Costner).


A tremendous extras package that defines this release.

There are a number of additional shorter Featurettes, including the overview Dances with Waves and the genre-specific Global Warnings which looks at similar post-apocalyptic features, as well as an expansive Promotional Gallery which boasts hundreds of behind the scenes stills and a number of Trailers and TV spots.

Beyond all of this, of course, we have the presence of the two additional cuts of the movie, including the Ulysses Cut which hasn't been previously released - and the lavish box set itself is topped off by a 60-page booklet, film cards and a poster, leaving this a tremendous extras package that defines this release. Mad Max: Fury Road could have very easily ended up the Box Office disaster that was Waterworld, and the two are similarly extravagant dystopia action epics which were set - and shot - in extremely unforgiving locations. The end result here may not have been particularly celebrated upon its release, but it's a striking feature nonetheless - a now relatively rare example of a practical effects-based shoot which actually shot on location, and a bloody enjoyable little Mad Max-ian romp to boot.


The definitive release, and a must-have purchase.

Arrow's new 3-disc Limited Edition release makes for a great start to the New Year - a lavish box set with excellent 4K-remastered video and strong audio options, as well as not one but two additional Cuts available on the individual separate discs too - the latter being the fabled and previously unavailable Ulysses Cut - and an excellent new feature-length Documentary to boot, all wrapped up in a great set complete with booklet, cards and poster. Fans should find it the definitive release, and a must-have purchase.