Not much substance to the film 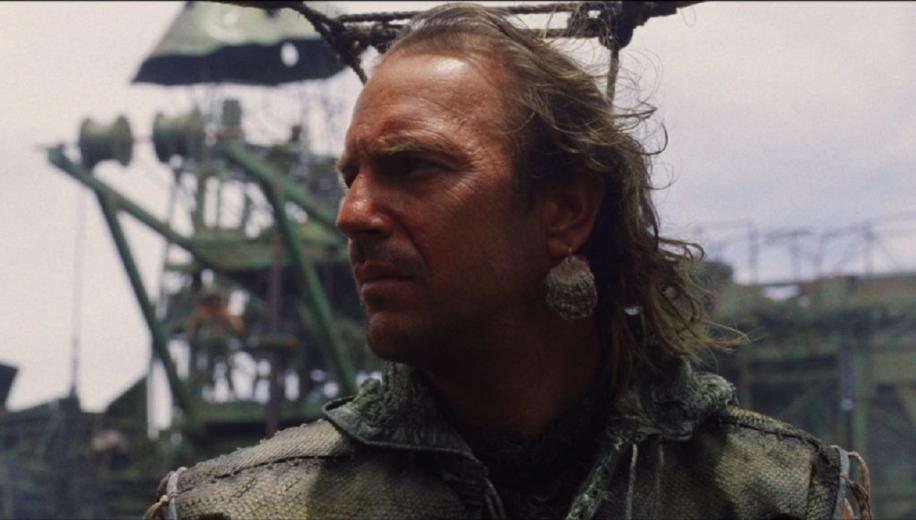 Because I haven't seen it. And I've sailed further than most men have dreamed

Much is known about the troubled production of tonight’s feature; the spiralling budget, the tensions on-set and the box office reception are the stuff of legend, so let’s not dwell. Let’s also try to forget the impossibility of the premise and, instead, just look at the film and any merits it might have.

The world has flooded and the remaining humans are eking out an existence trading what rare commodities they can find. Split into two factions, the ‘Smokers’ are little more than pirates using the oil left in an old tanker to fuel their craft, while the rest rely on wind and tide. With the discovery of a girl who has a tattoo of a map to the fabled ‘Dryland’ on her back, the Smokers take it upon themselves to kidnap her and use the map. But she finds an unlikely protector in the Mariner, an evolved human who is highly skilled in sailing, combat, and can breathe underwater. The stage is set for a showdown in which the fate of the human race might be at stake.

There is no denying the fact that Waterworld looks amazing; all of the massive budget is right there up on the screen; the huge sets, the impressive set design, the stunt work and, all at sea. Made in 1995 the film wanted to be all-action-adventure, a ‘Mad Max on water’ if you will. And on that level, it does succeed. Where it falls is in its relentless pacing and over the top action scenes, with effects and music used to pummel you into the ground – you know, a typical 90’s action film. There is a great deal of contrivance to get to the next action scene, and the character development treads a very formulaic path, both of which conspire to make your eyes roll. Indeed, there isn’t very much substance to the whole film, it just plays as ordinary. Yes, I know a lot of this is addressed in the extended cut, but even it still remains forgettable.

It is not hateful, but neither is it particularly good; it sits somewhere between ok and meh. This new scan really pays dividends; the detail on show is terrific – skin texture, clothing, sails, weaponry, masts against the sky, rigging and netting; edges are keen and distinct with no softness. Check out wet hair, droplets of water running down faces, the rust on the oars, the grime in bottles; excellent stuff.
Colours are bright and vibrant, but look very natural; the pallet tends towards the brown, but flesh tones are suitably rosy and blues are held firm. The odd splash of red is distinctly bold, and the greens (only seen at the end) are lush and strong. Fiery explosions are wonderfully intense.

Black levels are deep adding some good frame depth, there isn’t much shadow detail going on, though the oil tanker attack is pretty good. The white end of the scale really pushes out the picture: sun gleaming off the water, metallic sheens and other highlights really adding a sense of scale.

Digitally, there are no compression issues or banding. The source is clean and grain is held very well without that digitised look, giving a lovely filmic look. Very impressive stuff. First thing to say about the English DTS: X track is that it is loud. The second thing to say it that it is loud. Once set to the correct level the track is actually pretty engrossing. The surrounds and overheads are well used to provide ambience, the lapping of the sea, creaking of sails, chugging of engines etc. The separation is wide, and there is a real feeling of space to the ocean world. Bass is deep and thunderous, perhaps a tad pushed; the opening LF effect on the Universal logo rattles the floorboards, and there are plenty of boosted effects during the action scenes that add significant impact. It does feel a bit ‘thick’ though, unrefined even, as if boosting the bass is a way to compensate for its lack of finesse?

Dialogue, on the other hand, is a tad low in the mix, not enough to mess with settings, and nothing is ever missed, but with the rest of the track being so loud it can be a bit disconcerting. The score comes through well and is layered into the mix at a good level. Action effects are bombastic and come at you from all sides when required, though it is with the quieter moments where the real benefits of the extra channels are felt. The massive spiralling budget, the behind the scenes arguments and the box office performance of Waterworld are well known. But the film isn’t all that bad; it is a typical 90’s actioner, what with outrageous action scenes, very formulaic character development and a script that relies on contrivance and coincidence to get to the next set piece; the thing is, it feels unbalanced and rather ordinary, despite looking terrific. For me, it sits somewhere between ok and meh.

As a 4K UHD set, the package from Universal is pretty poor, actually. The native 4K image is awash with detail, sublime colouring, strong blacks and terrific whites; while the sound, albeit needing a volume adjustment due to being too loud, is wide, expansive, effects laden and very bass heavy. The problem lies with the extras; there are none barring the extended cut of the film, but that is only in 1080p – a real missed opportunity considering what is already available.