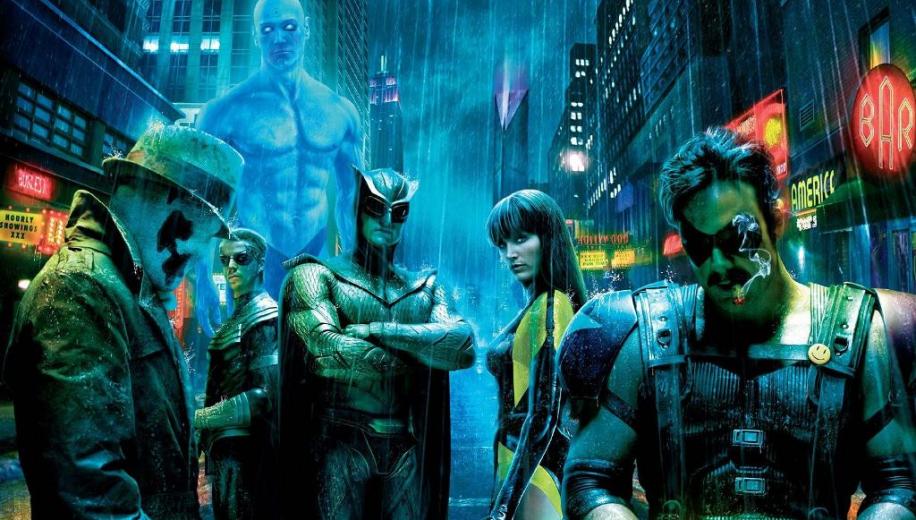 The accumulated filth of all their sex and murder will foam up about their waists and all the whores and politicians will look up and shout "Save us!"... and I'll whisper "no."

Watchmen, the comic book by Alan Moore and Dave Gibbons was a phenomenon in its own right; quickly becoming a critical and commercial success that was credited with redefining the comic book genre into a new and realistic portrayal of vigilantism and the effects on society – it was also deemed unfilmable. That is until a young Zack Snyder, fresh from another comic book adaptation (300) came on board with his enthusiastic take on the story and a dogged attitude to put the comic on the screen – literally frame for frame. The film on its theatrical run was met with mixed responses. Fans of the book were disappointed by what was left out and how the ending was changed; those that did not know the book were disappointed in the lack of action in what is a ‘comic-book’ film. Critics were disappointed in what was a somewhat lacklustre retelling of a classic read. But somehow the film survived all this. What is more Warner Brothers allowed Snyder to go back to his film and re-insert a whole host of extra material shot but excised for the Theatrical Run in a Director’s cut; many scenes adding more exposition and greater violence that was more in tone with the original writings, making it technically a far better film, but it still had its detractors.
It was also given a huge number of releases in 2, 3 and even 4 disc sets on Blu-ray which also made full use of the latest technology at the time. Indeed such was Snyder’s love for the book he even filmed the comic within a comic section ‘The Black Freighter’ (which had a separate release) and this was eventually combined back into the Director’s cut in this ‘Ultimate cut’. The book had several ‘comic within comic’ writings to further expound upon the complex themes and plots running through the story and were a necessary part of the narrative structure – whether or not they work within the confines of a film is another matter. The Director’s cut works very well, the insertion of the ‘Freighter’ for fan boys means a great deal, but as a narrative device actually detracts from the story as everything grinds to a halt during these segments, no matter how strict they are to the original drawings. Indeed the whole film has such a tie to the comic book due to Snyder’s insistence that the two become inseparable that it is in danger of never being its own piece. Technically Watchmen the film is an incredible achievement, but it is flawed to the degree it is always being compared to the source material and can never stand by itself. This is a somewhat frustrating picture. The detail on show is terrific, from skin texture, to the pits in Rorschach’s mask, from graffiti to cityscape overviews; there are keen edges with pristine clarity, even rain and mist is without flaw. In comparison to the standard (Director’s Cut) Blu-ray (included in the set) there is very little difference in the increased resolution; it is there, but you really have to look close to see it, and at normal viewing distances the two images are practically identical.

It is with the increased colour gamut and higher dynamic range where the major differences lay and in some instances these differences are marked. Take, for example, the scenes on Mars, where the Martian surface and sky have a much more vivid colouring to them; there are shades of red/orange that are simply not on the Blu-ray. Much the same can be said for Dr Manhattan’s blue colouring, there is so much more on the Ultra HD disc, this is true for his body as well as his glow on surrounding objects, including people. But not only is he so much more blue, but he is far, far more radiant, you actually get the feeling that he is glowing from the inside. Such scenes really stand out.

Both the colouring and contrast have issues. For example, reds no longer have the boldness they once had in the Blu-ray; the Comedian’s blood on the pavement, the red button that opens his secret cupboard and the stripes on the flag covering his coffin – appear mostly black; this is particularly true of the two former examples. And talking about the funeral, the grass is now an awful brown instead of the muddy green it was on the Blu-ray. Add to this some increased blacks and higher end whites and some of the mid-tones in the grimy streets of New York get lost, compared to the Blu-ray where everything is far more evenly matched. And this may cause an issue for some. Yes the blacks are far deeper than ever they were drawing you into the frame, yes the highlights are bright and vivid and beam out of the screen, but these extremes are at the expense of the picture as a whole. And this is not all the time. In the snow, the image is perfect, on Mars the picture is perfect, the added ‘Black Freighter’ scenes are perfect (not only the animation, the surrounding footage of the newsstand vendor and reader). And, as such, it becomes frustrating.

Digitally there are no compression issues, no edge enhancement, banding, jaggies or any other problems. The grain and stylisation of the source is intact giving that down and dirty look that Snyder was going for. If you had never seen the Blu-ray, there would be no argument, this is a terrific image, but in comparison I think, on balance, I prefer the Blu-ray. The disc has a Dolby TrueHD 5.1 surround track and right from the off it places you in the centre of the action. Effects, such as weather, traffic, breaking furniture, gun shots, punches, kicks and breaking glass; all are given pinpoint steerage around the room when required. Dialogue is clean, clear and precise, it sounds very natural and has some directionality when required. The surrounds are used both for ambience, and the aforementioned effects. Bass is deep and tight when it is used to fill out stereo effects with the sub specific LF effects adding some terrific chest thumping to fist fights, but there is a lot of the film that bearly registers. The score makes full use of the range, as well as all the speakers. Action scenes are somewhat scarce during the run time, but the prison break stands out as a terrific example of the mix in full flow, everything is cohesive and strong with the surrounds filling out the score, inmate shouting and other effects, with the bass used to add impact to the scene, though I'd like to have had it run slightly hotter, such as when 'Archie' is landing a few minutes before. The Ultra HD Blu-ray has no extra features, just the Ultimate version of the film

Full HD Director’s Cut Blu-ray – Houses the Director’s cut of the film as well as the Maximum Movie Mode, the all-out behind-the-scenes feature that steps in and out of the movie as it plays; hosted by Zack Snyder this was the pinnacle of Picture-in-Picture Blu-ray features, now long forgotten, and takes you behind and through the making of the film. Also houses the individual Focus Points; the slightly longer features that (in part) make up the MMM.

Extras Blu-ray – Contains the rest of the extras material:
The Phenomenon: The Comic That Changed Comics – Half hour feature looking at the creation of the original comics as well as cast and crew interviews about their brush with it.
Real Superheroes: Real Vigilantes – Another 30 minute feature looking the fascination with vigilantes without becoming too heavy and tying in the film.
Mechanics: Technologies of a Fantastic World – This 15 minute feature examines the ‘science’ of the film; how physicists incorporated real world ideas into the technology featured.
Under the Hood – At 40 minutes this ‘faux-documentary’ gives a retrospective look at the biography of Holis Mason (original Nite Owl) and the rest of ‘hooded justice’ and is one of the better features.
Story Within a Story – A 25 minute feature that looks at the Black Freighter and Under the Hood story lines that were in the comic book to flesh out some of the ideas necessary to add weight to the narrative.
Watchmen: Video Journals – Same 11 Focus Points found on the Director’s Cut Blu-ray, their titles are: The Minutemen, Sets & Sensibility, Dressed for Success, The Ship has Eyes, Dave Gibbons, Burn Baby Burn, Shoot to Thrill, Blue Monday, Attention to Detail, Girls Kick Ass and Rorschach’s Mask which, had there been a play all button would have made a combined feature of just over 30 minutes.
Desolation Row Music Video – Music video from My Chemical Romance. Watchmen: The Ultimate Cut is director Jack Snyder’s love letter to the comic book of the same name that redefined a genre and became a classic of its time. There is no denying the technical achievement that is the film; it parallels the original writings almost exactly copying swathes of dialogue and frames right off the page, and this extends to the comic within a comic ‘The Black Freighter’ used to expand upon ideas and themes (in the book) now inserted back into the film in this Ultimate cut. It works within the written world, but is rather jarring to the film narrative, pulling you out to catch up with the Captain and his doomed quest. Many prefer the Director’s cut and to have the ‘Freighter’ as an addition – sadly that is unavailable in Ultra HD Blu-ray.


Only the Ultimate cut is available in 4K Ultra HD

The Ultra HD Blu-ray set from Warner has some issues. Most obviously, noted above, it is only the Ultimate cut that is available in 4K Ultra HD. The Director’s cut is a standard Blu-ray within the set, and it also contains a second Blu-ray disc with extra features. The 4K Ultra HD picture is not quite the step up in quality as you might expect: detail is practically the same, colours when they are bight and bold (such as Dr Manhattan) are wonderful, but some primaries are definitely out (reds and greens for example). HDR in this instance pushes the blacks and whites to their extremes which leaves the mid-tones lacking punch and unevenly matched. The sound is terrific though, a Dolby TrueHD 5.1 track that provides an incredible surround experience. The extras are a holdover from the previous releases with a Maximum Movie Mode PiP track and a 2nd disc dedicated to extra features.