Who watches the Watchmen? 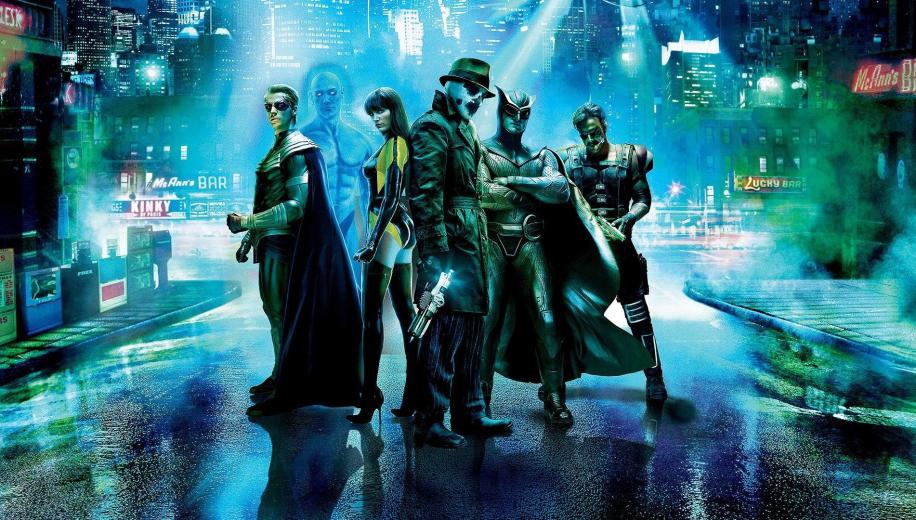 20 years in the making, Zack Snyder's adaptation of Alan Moore's seminal Watchmen is one of the finest superhero comic book movies of all time.

Moore's '86-'87 story took the comic world by storm, turning in a tale both epic and distinctly adult, as it reframed history, and repositioned a world of real superhero vigilantes, portrayed realistically, and therefore often neither particularly super, nor particularly heroic. It was a dark and unforgiving voyage, and - despite plans to adapt it as far back as at the end of its run in 1987 - the decades would suggest that it was utterly unfilmable (even Terry Gilliam, arguably the King of - for good or bad - filming the unfilmable, described it as such when he left the project during its nascent stages).

After his success at bringing Frank Miller's aptly sparse look at Sparta, 300, to the Big Screen, Zack Snyder was brought on board, and turned in a suitably faithful adaptation which - similarly to 300 - often relied on lifting the original comic artist Dave Gibbons' images and translating them directly to the screen. Unfortunately, in a post-9/11 world, the original novel's ending was deemed a little close to home, and some thoughtful and arguably equally effective changes were implemented, albeit much to the chagrin of long time fans. Watchmen would be trimmed to a more manageable 2.5 hours for theatrical showings but eventually restored to a more satisfying 3 hour director's cut which captured the spirit of the novel, and delivered one of the most striking, powerful comic book adaptations of all time. Eventually, an even more comprehensive 3.5 hour Ultimate Cut was released, which included the 'Black Freighter' story from the original novel and, although this fractured addition is somewhat jarring to the pacing, it remains the definitive adaptation of the novel - for good or bad.


Watchmen captured the spirit of the novel, and delivered one of the most striking, powerful comic book adaptations of all time

The story - which has been superbly revisited and explored from an almost tangential angle in Lindelhof's excellent HBO Watchmen TV series - is a wonderfully convoluted mystery, which takes in decades of 'superhero' vigilante history, intersplicing it with our own in an attempt to show the impact of these individuals on key events in real history (Vietnam, the assassination of JFK), as a backdrop to a conspiracy which one of the last active 'masks' (since they were basically outlawed), Rorschach, investigates, uncovering a plot to assassinate many of the surviving vigilantes - old and young - and a much bigger scheme which has the potential to impact the whole world.

Although perhaps lesser known upon its original release, Watchmen boasts a superb ensemble cast, with The Walking Dead's Jeffrey Dean Morgan on scene-stealing form as the strangely almost lovable (but mostly despicable) would-be rapist thug, The Comedian, Aquaman's Patrick Wilson as the more reserved second Night Owl, Rampage's Malin Akerman as the PVC-wearing Silk Spectre II, unhappily married to the most powerful being on the planet, Billy Crudup's (recently great in Apple TV+'s The Morning Show) Doctor Manhattan - the only one with any actual powers - and Matthew Goode (A Discovery of Witches) as slick superhero-turned-billionaire philanthropist and technologist, Ozymandias. Carla Cugino is also great as the original Silk Spectre, but above them all has to be Jackie Earle Haley (Alita) as Rorschach, playing it part Dirty Harry, part Taxi Driver, with his right-wing moral absolutes and strangely satisfying sense of justice and punishment.

Indeed, Rorschach is arguably the protagonist of the piece, guiding us through the sewers of society on his quest for the truth - at all cost - and it's a richly painted tapestry of a story that we get, which isn't particularly forgiving for those not paying attention on their first viewing, requiring absolute focus and more rewarding to those repeat viewers who come back and revel in the nice touches revealed on a second, or third pass. And, as superhero epics go, few deserve another rewatch as much as Watchmen.


Watchmen: The Ultimate Cut makes its UK 4K Ultra HD Blu-ray debut in the wake of a preceding US 4K release from way back in 2016, which wasn't met with complete satisfaction by any means, but which still championed an earnest improvement over the SDR 1080p Blu-ray predecessor. 2019's UK Watchmen boasts one fundamental difference over its sibling, wielding a presentation that looks likely to have come from the same master, once again ostensibly limited by a 2K Digital Intermediate, but here boasting a new HDR pass this time with the added ingredient of Dolby Vision.


Likely to have come from the same master, but here boasting a new HDR pass with the added ingredient of Dolby Vision

Stylistically at once gritty and comic-book-come-to-life in terms of dirty vibrance, Watchmen is equally dichotomous in its 4K guise, boasting some tremendous details - from the beads of rain on Night Owl's glasses at the funeral scene to the tear that tracks a slow line down the scar on The Comedian's face - but also has a fair amount of grain-turned-noise, like when the smiley face pin comes rattling to a stop at the beginning, and is also now impenetrably dark and grim, a facet shared with its US cousin.

It is dark subject matter, but there's no reason why a daylight shot of a newsstand should see the customers bathed in shadow to such a degree that you can barely see their faces. Nonetheless, for the most part, the raised black levels and questionable impact on shadow detail (perhaps mitigated by the DV) just about get a pass - as there are so many gorgeous shots and impressive dynamic improvements over the Blu-ray that you can't help but be intermittently wowed back on side. HDR, WCG and now Dolby Vision gift some stunning neons (as Rorschach walks the raining night streets, the purple neon lettering looks absolutely spectacular) and giving Doctor Manhattan, in particular, a glow which has been completely dialled up to 11. Shots of Manhattan and Silk Spectre in bed are also gorgeously rendered, with little bursts of energy popping on the screen, although curiously a later angry outburst at an interview sees Manhattan's blue aura bleeding uncharacteristically.

Depending on your familiarity with the Blu-ray, the alternate teal and sepia slants will either be frustrating or will largely go unnoticed, again mostly suiting the subject matter even if it pushes the colour scheme beyond what was likely the original intention. And the black levels will be a question mark for some too. But to fit a 3.5 hour movie on a single 4K disc, with Dolby Vision, and a cascade of unquestionably stunning sequences - from everything on Mars to the aforementioned electric blue bed scene, to all of the Black Freighter animated footage - and still leave it improving on the Blu-ray is still something to be commended. Sure, it's far from perfect, and only very intermittently demo, but when it pops, it really pops.

Hard to fault
Even without a High Definition 3D Object-based Immersive Audio Dolby Atmos track - which really would have been a treat - the current (and likely identical to the 2016 US 4K release which was, in turn, identical to the 2009 Blu-ray release) Dolby TrueHD 5.1 track is still, fundamentally, hard to fault. It's one of the better examples of the now relatively little-used lossless format, and happily travels into demo territory, sweeping you up in a cascade of classic period song tracks which belt out across the array, storming through some lively historical battle sequences, tearing through riots on the streets and exploding with almost nuclear energy every time Doctor Manhattan can't handle the truth. From Rorschach's gravely narration through to the screams and shouts of innocent and guilty alike, Watchmen is aural dynamite, and - Atmos or no - there's plenty here to engage, with LFE welcomed into your home carrying both a persistent hum and an occasional booming thunder.

Not quite making for The Ultimate Package, but still coming close

The 4K Blu-ray release of Watchmen: The Ultimate Cut gets added kudos for providing, well, The Ultimate Cut, which is itself something of an 'extra' as it features the extra hour of added material which was, over the years, released in various different forms - including as a separate Black Freighter movie. That it doesn't provide the various alternative Theatrical and Director's Cut versions in 4K is a little disappointing, as seamless branching should have left this of minimal trouble even with space being something of an issue to a mammoth 3.5 hour beast of a film. But it's the main reason to score the extras down, not quite making for The Ultimate Package, but still coming close, delivering the most complete version of the film, and two further discs, the first a Blu-ray copy which does include the (arguably superior) Director's Cut, as well as a Maximum Movie Mode Commentary, and the second packed with behind the scenes Featurettes, Video Journals and a Music Video.


As superhero epics go, few deserve another rewatch as much as Watchmen
Watchmen: The Ultimate Cut makes a belated bow on UK 4K Ultra HD, three long years after it was released in the format in the US, and still not quite perfect, despite the addition of Dolby Vision to spice up the palette. Nonetheless, it's the definitive release of this modern classic (anti-)superhero epic, boasting the most comprehensive version (even if, as with Apocalypse Now's Redux, that doesn't always equate to the best version), a decent enough video presentation which does benefit from the added DV, a stomping audio track, and a solid set of supplementals (which at least include the superior Director's Cut, albeit in 1080p). Fans may struggle to justify retiring their lavish limited edition Watchmen Blu-ray box sets, but this new UK release is as good a reason as any to push for a rewatch to see if you're happy replacing that set. And newcomers? Get it bought.