Romeo and Juliet but, you know, with zombies... 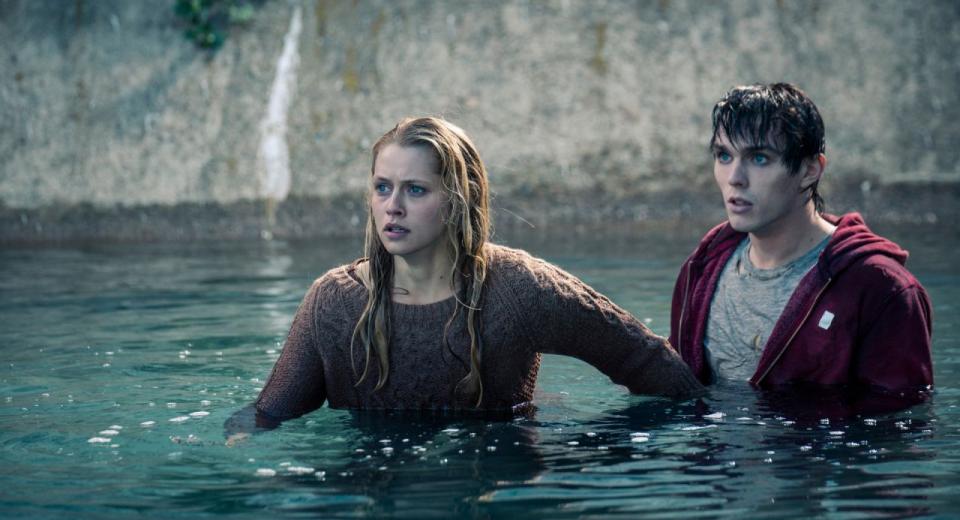 This 1080p AVC encode is presented in the UK in a 16:9 filling 1.78:1 aspect. The US release has the movie in it's original 2.40:1 aspect, but comparing the scenes featured in some of the featurettes on the extras, where the image is in it's original aspect, there doesn't seem to be any loss of image on either side, suggesting open matte rather than cropped. Furthermore, the screenshots of the US release that I have seen seem to confirm this fact.

It's a good looking transfer. It's not breathtaking by any stretch, but it's solid to say the least. The grading definitely has a considerable imapct on the colour palette for the movie, so it was either very brave, or very clumsy to go so hard with the blue - I'm leaning towards brave, as I found it gave the image quite the post-apocalyptic feeling required.

Contrast is pushed pretty hard, but without introducing any artifacting, and the image has a good depth to it as a result, but highlights tend to suffer a little. Blacks are pushed pretty hard too, but there's no crushing evident. Fine object detail is reasonable, and the grain level is moderate and more prevelant in some scenes compared to others. Personally I found it to be perfectly acceptible as far as grain structure goes, and didn't spoil anything. Sharpness is probably slightly below par for the standard we're getting used to with the format, but it's nothing to moan about really.

Despite the slightly odd colour palette, largely down to the grading decisions made by the DoP and director, and the grain level that may irritate some that are in favour of a completely clean image, it's a pretty decent video presentation. The DTS-HD MA 5.1 surround is fine. Dialogue is clear and occupies the centre channel mostly. What I found slightly odd was that a lot of the foley effects seemed to be sharing this single speaker a lot of the time. Probably something to do with the amount of on-set recording that was used. That's not to say that the surround array doesn't get utilised reasonably well, and bigger set-pieces have a decent spread to them. Sub use is fairly restrained, but it's depth is noticable in the bigger scenes. Music provides a lot of the spread in the majority of the movie, but in scenes with the zombie hoard, the groaning in the surrounds adds an atmospheric weight to the soundtrack.

All in all, it felt a little underused, but you could argue that it's restrained and dignified in what it tries to do. It's no Transformers or Man of Steel (the loudest movie I think I've ever seen), but as far as audio presentations go, it's decent enough. Jam Packed with extras, this disc boasts plenty of stuff to get your teeth into. At first glance, it seems there's an abundance of extras, but is it quantity over quality?

Audio Commentary with Director Jonathan Levine and Actors Nicholas Hoult and Teresa Palmer
Pretty self explanatory. I actually found parts of it quite fun and entertaining to listen to, though Teresa Palmer I found quite annoying at times, largely down to the amount she actually talks. Worth a listen though for sure.

Boy meets, err, doesn't eat girl
A 10 minute featurette about how the movie came about. Discussions with producers and actors and crew.

R & J
A 16 minute featurette focussing on the love-struck duo. Director Levine, along with actors and crew from the movie discuss the relationship between R and Julie, and who the characters themselves are.

A Little Less Dead
Yet another 16 minute featurette, this time focussing on the cast, and in particular, the zombies. With some charismatic discussion from Rob Corddry, who is excellent in the movie as R's best buddy-zombie, affectionately known as M. If you skip out on everything else, take a look at this at least.

Extreme Zombie Make-Over
10 minute featurette about the make-up guy, who happens to be Oscar Nominated Adrien Morot. Actually quite an interesting watch.

A Wreck in Progress
A 15 minute featurette on Production Design. Unbelievable that there actually is an abandoned airport in the world, but there is - in Montreal. This was the defining factor in the movie being shot in Montreal. Discussion from Martin Whist too, the production designer, who talks about how they dressed the aiport to look so authentic. Very interesting indeed.

Bustin Caps
A 10 minute featurette focussing on the stunts - of which there are quite a few in the latter part of the movie. The cast discuss the shooting of these scenes and learning how to shoot guns, lots of guns.

Whimsical Sweetness: Teresa Palmer's Warm Bodies Home Movies
A bunch of footage shot by Teresa on set on her phone, interspersed with her discussing how much she loves being behind the camera aswell as in front of it. I found it a nice feature, if a little jarring. I also found her voice a little irritating. Sorry

Zombie Acting tips with Rob Corddry
Another 5 minutes of Rob Corddry's endearing awesomeness. It's wrapped up in a fake interview scenario, and it's actually hilarious. The cast chip in with the faux discussion on how he wouldn't break character. I can't get enough of the guy. He needs to star in something decent sometime soon!

Shrug & Groan Gag Reel
5 minutes of self explanatory stuff of the mildly amusing variety. Worth a look for sure.

Packed to the rafters with plenty of content, the majority of which is entirely watchable. No filler here! Very much the re-telling of the tale of two star-crossed lovers, Warm Bodies is an off-beat teen romance that is clever, unique and entertaining. Although it doesn't quite manage to live up to all it could have been, it's still an interesting post-apocalyptic dystopian take on Shakespear's Romeo and Juliet, that will undoubtedly raise a smile or two with it's boyishly cheeky approach to the RomZomCom genre. Following the tale from the perspective of a lonely zombie who meets a girl and falls in love against all odds. Within the first five monutes it has me in the palm of it's hand, but for all too brief a time before it descends into romantic-comedy slurry. So close, yet entirely watchable.

The package on the whole boasts an impressive array of extras, and a video and audio presentation that's decent enough, even though here in the UK the aspect ratio is an open matte 1.78:1 compared to theatrical release of 2.35:1. It's one that's sure to be a crowd pleaser, although it's never going to be one to really put your system through its paces. It comes wrapped up in it's own neat little slipcover, and is worth a look for sure!