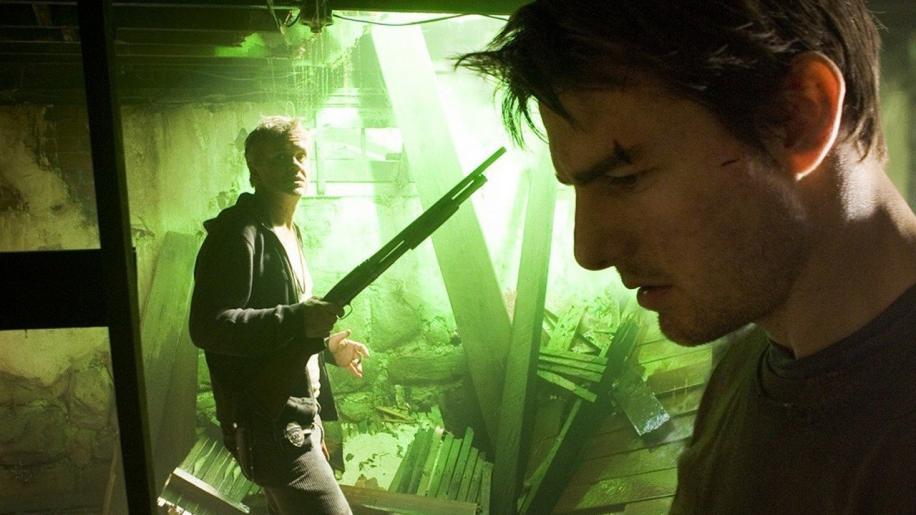 Well as mentioned, this was a grainy image to start with intentionally, so luckily I have the cinema experience to fall back on with regards to this. In terms of a normal DVD release, I would obviously criticise it with regards to this, but I'll ignore it as it has already been mentioned. In terms of colours and black levels, they are suitably accurate/faithful to when I viewed it at the local multiplex, with the red of the alien “mist” being scarlet as opposed to vivid red, as well as nice bright whites and similarly blue/red/green (in homage to the original) when Ray is holed up in the basement with the trigger happy Tim Robbins. Detail is good, you can see the pattern in the asphalt before the alien tripod emerges from the ground for example. I didn't notice any compression artefacts or haloing, so overall while this isn't an exemplary “image” on the one hand, it is completely faithful to how I viewed it when it came out on the big screen and has been scored appropriately. Of course, a war wouldn't be much of a war without explosions and this is certainly very lively during the course of the movie. With both a Dolby and DTS soundtrack, this is certainly going to give your speakers a fine workout. From the moment that the lightning comes out, ray gun deaths and the tripods stomping through the town you are in for one of the better soundtracks this year. I recall thinking at the cinema that this should sound impressive on DVD and it is indeed. With highly active surrounds, LFE rocking the room constantly and some nice panning effects, this could well find its way onto demo disk lists very soon. My only minor gripe would be that I thought the dialogue could have done with a slight tweak, mostly during the more lively sequences, but it is clean and clear just slightly (ever so) drowned out but then, if this were real, I'm sure it would be equally difficult to hear. Definitely in my top 10 soundtracks this year and I can't give it much higher praise than that. No extras on disk one, so we kick disk two off with Revisiting The Invasion, an 8 minute featurette which explains the genesis of this project, which is Spielberg relaying to the viewer that after Minority Report, he wanted to work with Cruise (a Spielberg fan-boy if ever there were) again and gave suggestions of 3 possible projects, at which point Cruise was excited by this one. Nothing particularly deep here, but gives you an answer to why did they make this.

The H.G. Wells Legacy is a 6 ½ minute feature where the current descendants of Wells discuss his life and his stories. It's definitely worth viewing if you want to know a little about him from the proverbial horses' mouth.

Steven Spielberg and the Original War Of The Worlds is an 8 minute feature where Spielberg explains how he asked for Barry and Robinson to have cameos in the movie, as well as highlighting homage's (such as one in E.T.) where he's given a subtle nod. Clearly Spielberg is a fan of the original and it comes across.

Characters: The Family Unit is a 13 minute featurette which covers the 3 main characters, Ray, Robbie and Rachel and their wardrobe among other topics. Not particularly amazing, but worth a view once but that's about it.

Previsulization is a 7 minute featurette which focuses on how Spielberg constructed computer animated storyboards for the action sequences, which is interesting as it appears this is the first time he's used this approach, but other than that, kind of dull.

Production Diaries are split into four sections: East Coast - Beginning (22:30), East Coast - Exile (19:40), West Coast - Destruction (27:30) and West Coast - War (22:21). Each section consists of a segment to gain a very in-depth making of, with the first part focussing on the opening scene where we first see the tripod, for example. The benefit of having it split into 4 sections does mean you don't have to view it all in one sitting as it's roughly 92 minutes in total (which is practically a movie!) and while there is an element of pretension, it is indeed very interesting to view, as for the uninitiated, we learn what parts are paying homage to the 1953 movie or which part relates to the original novel. Cruise comes off seeming very down to earth and nice, Fanning screams a lot and Spielberg isn't camera shy either, but if you want to learn a lot about the making of key sequences, this will fulfil most of your needs!

Designing The Enemy: Tripods and Aliens is a 14 minute featurette which shows the process and evolution of the designs for the tripods and the actual alien creatures themselves. It's interesting to see and hear how they were realised and again on how hands-on Spielberg was in their development.

Scoring War Of The Worlds is a 12 minute featurette which focuses not on the musical score, which was written my John Williams and which he tells us at great lengths as to what inspired him for certain scenes and what sounds or cues he used. Sorry, but I found this really dull, but I'm sure many people will enjoy it.

Finally, ”We Are Not Alone” is a 3 minute wrapping up of the extras is probably the best way I can put it. It's a little nod of thanks to Spielberg and from him to his father for inspiring him. Well if you expect a verbatim remake of the 1953 original, I think you'd be disappointed, but that would probably be doing this version a great injustice. It's a fast paced sci-fi movie which is grounded in one of Spielberg's favourite movie topics - that of Family - with plenty of spectacle along the way. It does contain an absolutely cracking soundtrack, so even if the film doesn't appeal, there have not been many disks this year that will show off your amp and speakers like this one will. But this is certainly no Jurassic Park 2, nor will it be regarded as his best movie, but I can't complain as this is certainly one blockbuster that delivers on its promise.