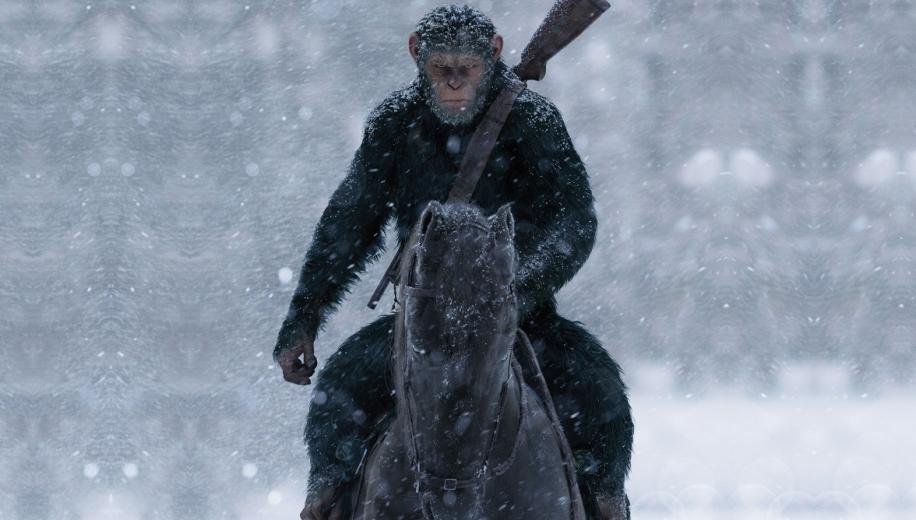 Blending Platoon with The Great Escape, War for the Planet of the Apes only partly delivers on its title, but certainly provides a fitting conclusion to a strong and impressive trilogy.

Although Rise of the Planet of the Apes was not all that celebrated on release, with hindsight it was the much-needed origin story which allowed us to revel in the glory of Dawn of the Planet of the Apes, a tremendous sequel, cementing this band of evolved 'apes' as fully-rounded characters, more fleshed-out than their human counterparts, with the CG required to bring them to life near-perfect in its own evolution. It was a surprise blockbuster gem that allowed the inferior Rise to be a part of a grander whole and paved the way for the end-of-the-line conflict in War, as the remnants of mankind fight to wipe out their sworn enemies. Whilst only intermittently an outright 'war' movie, there's no question that the harrowing opening sequence in this final chapter is ripped straight out of a classic war movie, only replacing humans for apes on the battlefield.
However Matt Reeves' second sequel takes a surprise left turn for its second act, trading war movie vibes for something far more Western in spirit (The Wild Bunch) before devolving into an escape movie. It's a blend of genres struck with disparate references to classic films from Apocalypse Now to The Great Escape to Spartacus and Ben-Hur, and whilst it feels a little shotgun in its approach, the mythical, Western-infused Biblical strands coalesce as the feature goes on to reveal a strong backbone that has secretly been holding the whole piece together. Serkis is once again a commanding Caesar, although Steve Zahn gives his best performance as a PTSD-suffering soldier, and even Woody Harrelson's blatant riff on Kurtz is pretty effective. With some tremendous set-pieces War certainly delivers a fitting conclusion to this consistent trilogy.

Following the style and delivery of the preceding two Apes movies in the trilogy in 4K, War, given the already impressive 1080p Blu-ray, mostly falls into the same trap - i.e. delivering a stunning presentation which just isn't all that different from its Blu-ray counterparts. However the intervening years have been kind in terms of CG technology and the crystal clarity of some shots, and stunning background vistas do still afford the piece some measure of distinction over its 1080p sibling.


An improvement over the Blu-ray, but a subtle one

Sure, the 2K Digital Intermediate limits the source somewhat, restricting the sheer technical increase in detail but there's still a nice little uptick to some shots, particularly the close-ups, where it's often hard to remember that these CG creations aren't real. WCG and HDR offer subtle shifts too, similarly implemented as on the preceding Apes films; there's nothing striking in terms of differences of colour tones, with a few tweaked hues and, overall, a slightly more natural feel to the skin tones and hair, and richer greens, whilst the often near monochromatic snow backdrop does benefit from the HDR implementation in terms of gradation. At the end of the day, this is still an improvement over the Blu-ray, but it's a subtle one.

In much the same way as the picture presentation, the technically superior Dolby Atmos audio that exclusively adorns the Ultra HD Blu-ray version of the movie already has some high standards to beat against not only the Blu-ray counterpart's DTS-HD Master Audio 7.1 track, but against its very own Dolby TrueHD 7.1 core, both of which offer near-perfect, reference examples of what the format can offer, even before considering the immersive audio improvements.


The soundtrack is as good as it gets

War for the Planet of the Apes has fabulous sound design as you would perhaps only expect from a 'war' movie, affording the opening sequence some striking intensity which draws you right into the bloody battlefield for some claustrophobic conflict, however as the film progresses it also exhibits more striking nuances, from the footfalls in the snow to the howl of the wind, whilst the prison camp atmospheric continue to shift the stage. Surrounds get a great workout, with discrete dissemination offered up from the superbly crafted soundscape, and a weighty LFE underlining. Gunshots echo into the distance, although full throttle war comes largely only at the bookends - but is thunderous when it lands nonetheless. This is precision audio, as good as it gets.

Although War for the Planet of the Apes boasts a pretty hefty swathe of extra features, they are almost all relegated to the accompanying Blu-ray disc, with only Matt Reeves' engaging Director's Commentary making it over to the Ultra HD Blu-ray disc itself. Even though it's pretty-much the norm for Ultra HD Blu-ray releases, this kind of laziness is still disappointing when it's clear that Studios have the ability to port over the extras, and just can't be bothered to.


An impressive extras collection to round out the series

The remaining extras are predominantly Featurette-driven, with the better-than-average half-hour Making of, Waging War for the Planet of the Apes providing the meat of the background information into this production, whilst shorter Featurettes on Caesar, WETA's effects, the Music, and the overall Apes saga (encompassing the older classics too) complete the picture. We also get a strong salvo of Deleted Scenes (albeit in incomplete states of effects), and a Concept Gallery. It's an impressive extras collection to round out the series.

20th Century Fox's UK Ultra HD Blu-ray release of War for the Planet of the Apes provides much the same excellent video and audio as the Blu-ray counterpart, albeit improved with immersive audio and upscaled 4K picture, and exactly the same extras - accessible only on the Blu-ray anyway.

Those who appreciated the same subtle improvements on the previous two releases will definitely appreciate this; those who didn't find the previous 4K Apes re-issues worth the cash will at least appreciate that this is released day-and-date with the Blu-ray, so they don't have to double dip. Either way, War for the Planet of the Apes comes highly recommended.