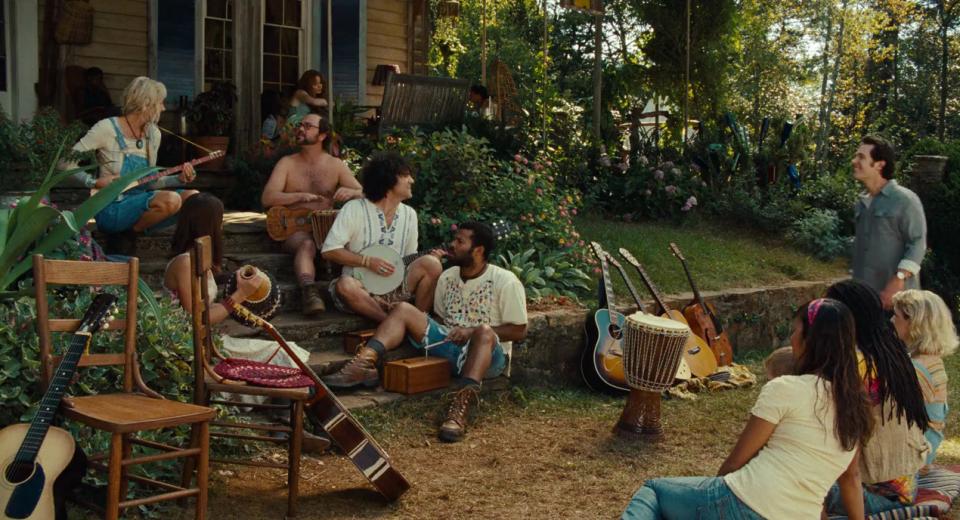 The 1080p 1.85:1 image is not bad. It's not great, but it holds it's own. The grading is well thought out and not at all heavy handed, and contrasts well between scenes in New York, with a blueish kind of hue, lending a colder sense to the picture, to the scenes at Elysium where the warmth of yellows and oranges give the mood a summery lift. Colours are vibrant and rich, especially in the background foliage and forest scenes. Blacks are deep, but not without some occasional signs of light artefacting, but only really if you go looking for it. Contrast is great, and skin tones are rich and realistic. Shadow detail is fair, and overall, the image is sharp and crisp. One stand out scene is the psychedelic acid scene where Linda takes something similar to a tab of acid, the visuals that follow are stereotypical, but really show off the colour palette the movie has going for it. There's a good amount of grain on the image, but it feels intended, and lends an authenticity to the picture on the whole. No signs of heavy-handed edge enhancement and DNR is subtle and careful, and doesn't even come close to softening the life out of the image. On the whole, a pretty good show here. Nothing to cry about, but it's not going to be a demo display movie. Hardly the fault of the image though, more the nature of the movie. Sound is a mystery with Wanderlust. It's not like the subject matter requires a huge amount of special effects, but it feels a little light on the surround sound side of things. Sure there's some light atmospherics in the rears now and then, but that's about it. This is surprising considering the excellently authored DTS-HD Master 5.1 Audio track is so crystal clear. Dialogue is fantastic and stands out perfectly well, to be expected with a dialogue driven comedy of this nature perhaps, but still worth applause nonetheless.LFE use is virtually non existent, so nothing to comment on there. As for the music, it's nothing groundbreaking, but is suitably folky, with fitting melodies and guitar themes, understated and subtle. A decent offering, if a little sparse in the surround department, but this is to be expected with the genre. It's never going to climb higher than the "average" pile, but it doesn't leave you wanting for anything. The most important thing in this movie is the dialogue, and that gives a pretty good show all in all. I was pleasantly surprised by the extras featured on this Blu-ray, most notably the Bizzarro cut of the movie, which extends a whopping 80+ minutes, and is comprised of out takes and gag reels. A true gem, and exactly the type of feature I hope for with every movie extras package on a Blu-ray disc.

Wanderlust: The Bizarro Cut – A re-edited version of the movie using all outtakes and edited scenes. You wont find any of the original footage here, all new, all hilarious. Rather ingenious approach! A word of warning, you'll need to watch the actual feature before delving into this - it may confuse you otherwise

Gag Reel – 6 minutes of bloopers and outtakes. Show is stolen by Paul Rudd completely grossing himself out whilst trying to work up the courage to have sex with another woman. Comedy gold.

Deleted Scenes – 7 minutes of cutting room floor action. It's evident that the editors had a tough time dropping any of this stuff.

Not a great deal of variety, and I can't help wishing that I could have the option of a commentary with Rudd and Some of the other cast, perhaps over the bizarro cut, but definitely a solid display of extras with the feature length re-cut. From start to finish, Wanderlust is a good natured and genuinely funny Com-Rom (see what I did there?) that manages to raise plenty of laughs. Paul Rudd is peacocking his own brand of cringe-worthy improvisational gross-out humour, and clearly having fun while he's doing it, while Aniston has her moments, though few and far between compared to Rudd and Theroux, who plays an excellent supporting role. With a high calibre cast, and a large helping of amusing moments, it's unlikely to disappoint.

As for the Blu-ray package, the picture is good and bears no hallmarks of over zealous transfer correction. Sound is underused, but mostly due to the nature of the movie - what is there is expertly mastered. Extra's are great, and will undoubtedly raise yet more laughs, particularly with the Bizarro cut which is truly excellent. The only gripe I would have with the package is Universal's insistence on implementing a menu system that is clunky, tedious and infuriating. Selecting the items you want on the disc should be a smooth and simple affair, not a painful chore; and no one should have to sit through more than 2 minutes of un-skippable dross before they are allowed to access any features on their purchased disc.