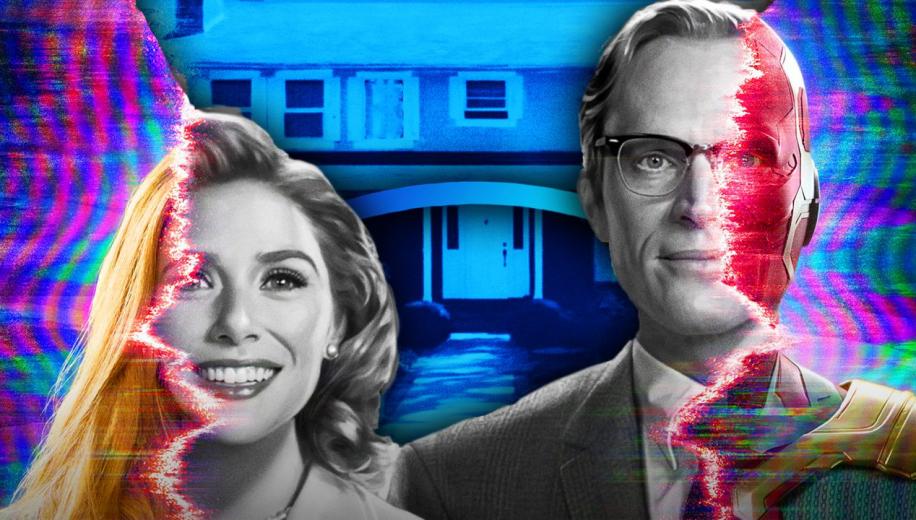 “Where do they go after that?” The question we all asked after the credits to Avengers: Endgame rolled. Finally wrapping up a story a decade in the making, losing some characters, irrevocably changing others; it was very definitely the end of an era of Marvel movies.

That was never going to be a bad thing. Though Kevin Feige, as the man in charge of all things Marvel, demonstrated willingness to push the boat out in the later phases, there was still something pretty cookie-cutter about Marvel movies. You knew what you were getting: some fun quips; an underwritten bad guy; a CGI showdown, mostly hovering between “pretty good” and “almost great.” But the formula is wearing thin and a decade spanning story is not something that most audiences are ready to jump right back into. So, where do you go after all that? According to the first in a line of Disney+ exclusive Marvel TV shows, the answer is “anywhere they want.”

WandaVision is a 9 episode, high-concept mini-series which plunges two second-tier superheroes into the world of sitcoms. Not just one sitcom, though, a whole range spanning the generations. It isn’t even vaguely interested, over its two-episode premiere, in revisiting the action-centric, colourful CG world of Iron Man et al. Here we have a 4:3 black and white screwball comedy that just assumes you’re onboard for the duration. Not since Noah Hawley’s incredible Legion for FX has there been such an unapologetic lack of solid answers, concrete reality or basic super-heroing in a Marvel project. And that’s awesome.

If your history with Wanda Maximoff and Vision extends as far as the Avengers movies, you’ll know that Vision is essentially a magic computer in the shape of a man and that Wanda can do some sort of red magic, only really hinting at the true extent of her powers in a face-off with Thanos during the events of Endgame. If your familiarity with the pair extends beyond that, you’ll have a clue as to how almost infinitely powerful - and dangerous - they are. If however, you’re totally in the dark, and in need of a primer on the pair, there’s a handy catch up for their involvement in the MCU to this point in the newly released Marvel Studios: Legends series, also on Disney+, which provides helpful individual recaps for each of them.

As far as what the future holds for the characters, WandaVision is careful to give very little away during its first two episodes, playing into its sitcom-y elements almost without breaking face. Episode one is a cute homage to all-American favourites like The Dick Van Dyke Show or I Love Lucy, while the second shifts the comedy conventions on a few years into the territory of Bewitched or I Dream of Jeanie. Both episodes are terrifically charming and nail the wholesome humour of those 60s sitcoms with surprising ease, mimicking their inspirations while miraculously earning some genuinely big laughs. There’s a particularly wonderful moment where the two must put on a magic show for a neighbourhood talent show without letting it look too real where the slapstick is sublime.

But it’s not long before the cracks in Wanda and Vis’s new reality start to show: little visual moments; an occasional name drop during a commercial break; and finally, a very firm confirmation that all is not as it seems. This is no spoiler, Vision and Wanda both have very defined lives as part of the MCU and living as a fish-out-of-water couple in a 60s’ sitcom doesn’t really figure in them. We already know something is wrong, but by the end of the second episode, a nod or two to some horror elements to come hint at just how wrong things might be.

Elizabeth Olsen reprises her role as Wanda, though with much more verve and charisma than we’ve previously seen. The switches from showing the pre-requisite moxie for a 60s sitcom wife to the genuine fear that her reality might be falling apart are handled deftly and without over-dramatising. With much of the uneasiness coming from Olsen, Paul Bettany is free to have as much fun as he likes, completely buying in to their new surroundings. His all-in enthusiasm for his part is far removed from the, frankly, dull character presented to us in the Marvel movies and it’s a welcome change. Finally given a chance to demonstrate some range, this is Olsen and Bettany finally earning their place as useful and interesting characters in the Marvel world.

The entire thing is a joy to watch.

There’s a level of ingeniousness to the production design too. Costuming and sets are spot on; hokey effects and little animated sparkles lend it the certain something required to get you almost forgetting this isn’t an old sitcom. And the whole thing is rounded off with a truly pitch-perfect laugh track. The entire thing is a joy to watch.

There’s not yet enough of WandaVision to say for sure how well they’re going to pull off the transition from sitcom to horror, or from… whatever it currently is into a superhero show, or if that’s even the intention, but if the final moments of this opening hour are anything to go by, it’s going to be interesting finding out.

WandaVision is released weekly. Episode 1 and 2 were released on Disney + 15th January 2021 and are available under your Disney + subscription