Wallace & Gromit in The Curse of the Were-Rabbit DVD Review 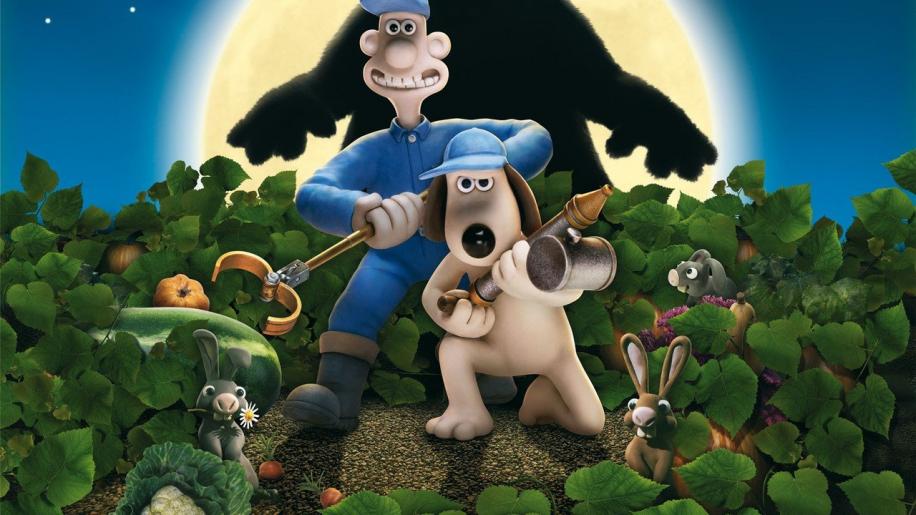 As can be expected from animation on disc these days, Curse Of The Were-Rabbit looks simply gorgeous. With an anamorphic 1.85:1 image, the film fills the screen with luscious colour and pin-sharp detail. It may not have the jaw-dropping vibrancy of The Incredibles or any other CG-concocted dazzler, but the picture here has little or nothing to complain about. The Claymation process may make things look a little grubbier - because they are actually real objects being manipulated as opposed to pixels buffed-up on a computer - but the result is still a rich and captivating dollop of the purest eye-candy. Colours are wonderfully rendered and the black levels have a reassuring solidity that aids the mystery element no end - the Rev. Hedges in his encounter with the beast or PC Mackintosh nervously walking the beat have oodles of thick shadow.

Fine detail is marvellously depicted with everything in the frame crystal clear and sharply delineated. Depth of field is pretty well maintained, with landscapes, the crowded church and the streets during Gromit's awesome chase scene all achieving a cool realism. Fast action is handled superbly and I can't think of a single instance when the disc dropped a gear in its visual depiction of the on-screen antics. Even the layer change is craftily done with a very canny placement. Personally, I had no problem with edge enhancement and I saw no evidence of artifacting, noise or blocking. Excellent. The Dolby Digital 5.1 soundmix uses the full set-up but it does so in a family-friendly manner that will only upset the neighbours if you bang out the theme tune on their wall with a lump hammer. Everything is present and correct, with a good dose of sub action, lots of steerage across the front and a fair bit of surround from the rears, but somehow, it still seems to lack a lot of punch and depth. It just doesn't seem to fill the room with room with that all-enveloping sound-design that we crave. That said though, voices and effects are clearly steered around the speakers and there are one or two instances when a nice aural trick is delivered. Victor's mutt, Philip, lunging at Gromit just before the big transformation features a cool back to front swish and the guns at the funfair have some decent, though small-scale, dynamics. The dogfight is nice and active as is the underground chase, but I think that it is the score that has benefited most from this mix, coming across with plenty of presence and a sparkling presentation. So, overall, this does the job ... but has no real conviction. Well, this R1 edition has a fair few extras but the overall feel is, perhaps fittingly, light and fluffy. First up is the Commentary from Nick Park and Steve Box. Now, this, I enjoyed. The two are engaging and so in love with their work that it would be difficult not to stay with them for the full chat, and they do talk until the very last credit. There's lots of mention of scenes, ideas and gags that were cut and talk of the efforts made to retain the “smallness” of Wallace and Gromit within this new Hollywood scope. The pair come across well and they are very chatty, with a lot of information bounced between the two as they deliver a very thorough examination of their exacting filmmaking style. It's the most arduous genre to work in - how do you keep the jokes fresh over a five-year period of intensive production? - and the two refer the end of the project as similar to getting out of prison after a long sentence. Both appear to have a rather strange passion for Lady Totty and Park is quite honest about any element that he thinks doesn't work so well. In all, a pretty enjoyable track.

Next up are a selection of Deleted Scenes. With a Play All option these last for 13.12 mins and are, perhaps, better viewed with the optional commentary from the same duo as there is very little here that actually adds to the film or the story. We get an Alternate Opening, a couple of Alternate Endings along with some more Mindo-Matic tricks and some CG rabbit ears. There is a mixture of finished animation, sketch animation and storyboarding. Not bad.

How Wallace And Gromit Went To Hollywood (20.21 mins) is a pretty decent documentary that chronicles the life and times of the titular duo from Park's initial cartoons and eventual Film School Project that Aardman Animation helped him out with in the end, after he worked for them. The full back catalogue is discussed with copious clips - from A Grand Day Out to Creature Comforts - and we even get to hear from a representative from the Wensleydale Creamery who admits that they were only saved from going under by the close association they have been lucky enough to forge with Wallace's cheese cravings. We get views from around the world and even get to hear snippets from the foreign language versions - check out Wallace in Japanese. Chicken Run bolstered their talent and reputation, bridging the worldwide divide, yet the team are determined to persevere with their own unique up-north style. The disaster that struck the archival warehouse when a fire ripped through it and destroyed all the models from years of creativity is addressed, too. Park tells of hearing the terrible news just a moment after being told that Curse had scooped the No.1 slot in the US box office. A fine little documentary, folks.

Behind The Scenes Of The Curse Of The Were-Rabbit (13.01 mins) is sadly just a bit of filler, really. It's got one of those annoying narrators with that thick Transatlanic drawl and is merely EPK stuff. Some of the cast talk about their characters and there is plenty of spiel from Park and Box, plus a nice shot of Wallace taking a tumble in front of the camera, but this is fairly ho-hum and would never be referred back to. Does Jeffrey Katzenberg give you the creeps, or is it just me?

A Day In The Life At Aardman (8.24) is a whirlwind tour around the studios at Bradford in the company of assistant director Vinnie, taking in the set dressings, the props, the painted backdrops, the artists and animators, the editors and the model builders. It has a kid-friendly approach of being light and humorous and, inevitably, not very revealing. Thus, fresh and fast, but hardly detailed. It is nice to see the room full of finished models, though.

How To Build A Bunny (3.29 min) speaks for itself. We meet Harriet as she talks us through the construction of one of those terrific plasticene bunnies. I noticed a slight lip-synch error on this feature but it doesn't take the shine off what is possibly the cutest extra feature that I've ever seen.

Stage Fright (11.08 mins) is a short film from Aardman's back catalogue about a dog juggler in a stage-show act that features some pretty accomplished animation and surreal imagery. One guy provides all the voices. This was Steve Box's first solo animated film and dates from 1997. Somehow this little short left me cold, I'm afraid, but listening to Steve Box's optional commentary enlivened it considerably for me. He's just such a likeable guy.

The Family Album is a collection of galleries. We have Signs with 8 photos, Storyboards with 11, Wallace And Gromit's Photo Album with 10 and Behind The Scenes with 25. Not too bad, folks.

Then we get the Dreamworks Kids section. Cracking Contraptions is a brilliant feature that showcases three inventions in their own little Wallace and Gromit animated adventures. The Snoozatron (2.38 mins) is a real treat - though not for poor Gromit. The 525 Crackervac (2.16 mins) is good fun, too. But the Shopper 13 (4.00 mins) is the best of the bunch - a great mini-epic along the lines of Apollo 13 except with a rogue shopping trolley instead of a spacecraft. “Begin cheese acquisition.” Excellent stuff, folks.

Games and Activities has the Anti-Pesto SWAT Team game which sees you capturing bunnies - humanely, of course - through three levels, whilst Victor Quatermaine's Guide To Cool and Style With Lady Tottington have little to offer, to be honest. And then we get Build Your Own Bunny, which promises to help you turn a hunk of clay into an animated bunny, but in reality is just the same little interview with modelmaking Harriet from earlier. A bit of a con, then. Plus, we get some DVD-Rom gubbins, too. Oh, and a couple of Previews, for Over The Hedge and the next Aardman/Dreamworks production Flushed Away, that features the voice of Wolverine, himself, Hugh Jackman.

This is a pretty good selection really. The commentaries are good value and the history of Wallace and Gromit feature is worthwhile, but the coolest is the Cracking Contraptions segment. A good package, overall. Curse Of The Were-Rabbit is a thoroughly entertaining piece of typically British comedy, wrapped up in lush visuals and capped off with a great twist on the werewolf myth. I am big fan of Wallace and Gromit and this big screen movie outing for the duo sees them on top form. A classic of its kind and no mistake.

The DVD is good value, too. I'm not sure if the R2 differs from this American release but the film is pretty much essential. A great big plasticene thumbs up! Cracking stuff, Gromit!