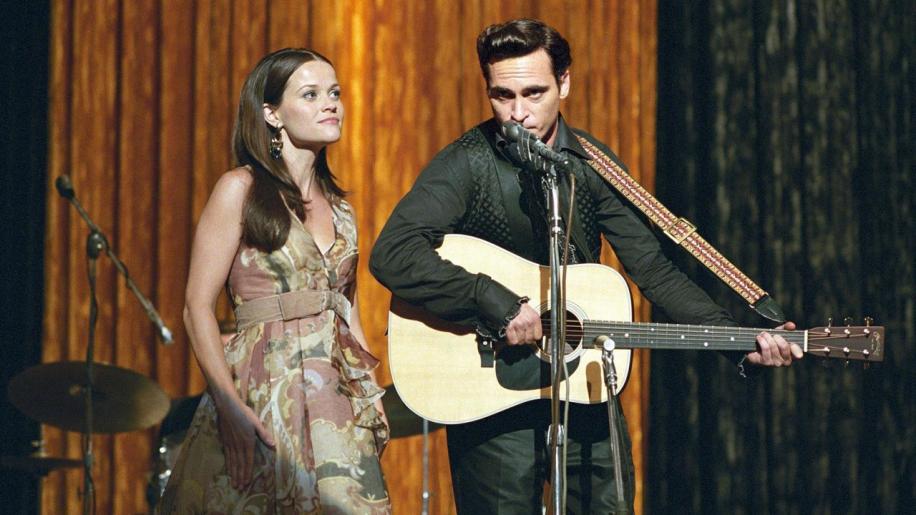 The movie is presented in it's original theatrical ratio of 2.39:1 widescreen, enhanced for 16:9 displays, and it looks fantastic. The source print is in pristine condition, as you'd expect for such a recent film. Colours and skin-tones are authentic and well-saturated without a hint of bleed or blooming, and the blacks are deep enough to capture various shadow highlights. Contrast is also excellent, with the myriad brightly-lit stages proving no problem for the transfer.

Detail levels are very good, with every bead of sweat visible on Phoenix's forehead as he belts out the hits. The transfer errs towards a softer look, which maybe limits the very finest details but it's still pleasingly film-like (I did spot one conspicuously grainy shot near the end of the film).

The compression is superb, with only a couple of brief shots exhibiting some noise on static backgrounds. Edge halos are noticeable only by their absence. Basically this is top-grade stuff that looks three-dimensional at times, giving the beautifully composed widescreen framing a platform to shine.

This disc has both DTS 5.1 and Dolby Digital 5.1 audio, but the DTS track is so good you might as well not bother with the other. The DTS is clean, dynamic and detailed. It has a deft touch (in one scene a bottle goes rolling off screen-right with delicious accuracy), a beautifully atmospheric sound stage (when backstage in some scenes you can still hear every note of the current performance from the rears) and those all-important vocals are rich and precise.

The music is as accurately composed as you'd expect, and you can pick out every instrument with ease. The LFE underpins the music with surprisingly tuneful bass, although it can go plain loud when necessary (the raucous opening sequence in Folsom prison actually had me turning the down the volume for fear of causing a seismic disturbance). Dialogue can sometimes seem a little low, but with a dynamic range like this it's a small price to pay - or it could just be down to Joaquin Phoenix's approximation of the late Mr. Cash's deep voice. There's always the subtitle option to fill in the gaps, although the songs aren't covered for some reason. Boo.

The Dolby track, if that's all you can manage, still ranks as extremely good. But it simply doesn't have the same kick as the DTS track, so the performances lose a little of their lustre as a result. The dialogue still occasionally sounds low in this mix too. The alternate language mixes are perfunctory at best.

The ten Deleted Scenes, spread over two segments timing 11:22 minutes and 12:22 minutes respectively, are a mixture of scene extensions and outright deletions. There's one amusing little scene in particular where Cash breaks the test pressing of his first record and thinks he's broken the only copy, but none of these tell us anything that we aren't already told in the film, which sums up this entire batch of scenes.

What's really worth a mention is that all ten scenes are fully post-produced, presented in anamorphic widescreen framed at 2.39:1 with Dolby Digital 5.1 audio. Some scenes even accredit the deleted performers such is the impeccable nature of the presentation. The scenes are also briefly book-ended with the appropriate footage from the final film and are accompanied by optional commentary from director James Mangold. He reveals nothing groundbreaking, just typical deleted scenes fluff describing what's going on and talking about how certain things have to go when a film has to hit a certain length. He stays quiet a fair bit too.

Thankfully, Mangold's main Audio Commentary is much better than his superfluous chat on the deleted scenes, as he tells us how the screenplay came together, the difficulties encountered in trying to do such a film, how he put the cast together and so on. He pauses every now and then, but only for a few seconds and keeps up with plenty of information and insight, not only about the film but also about Cash himself.

Last up is a couple of Trailers, one for the film itself and the other for the soundtrack. Neither is spectacular, but there are glimpses of deleted footage (like Cash picking out a guitar) in the latter.

Walk The Line is a cracking little film, being thoroughly enjoyable and well made with some outstanding performances. It's a good thing then that the superb video transfer and vibrant DTS audio do it justice. There aren't a lot of extra features to be had on this 1-disc edition, but what's there is surprisingly polished and worth a look.