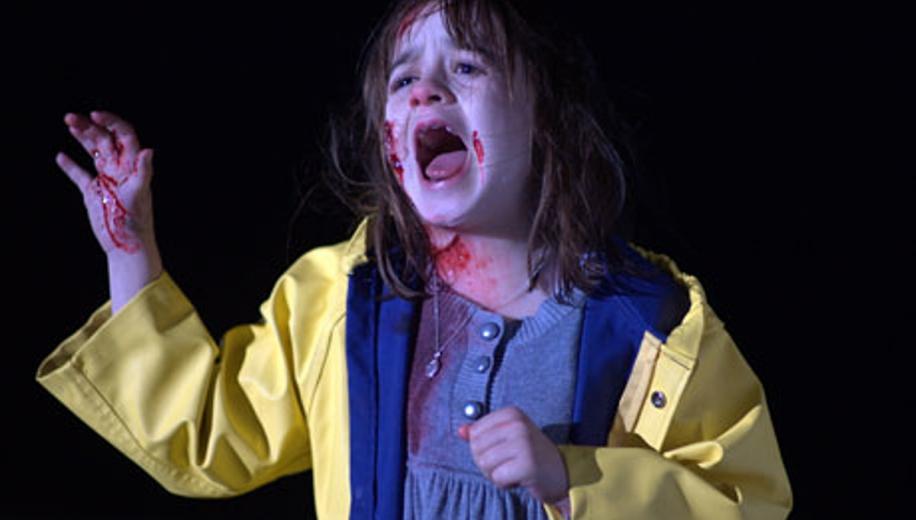 This SD DVD review copy suffered one glaring defect, and that took the form of some obvious horizontal banding appearing whenever the screen went to black during the opening titles. Now, I should stress that this effect, as unpleasant at it is, did not then go on to appear during the rest of the film’s darker scenes. It is possible, given the uniformity of these narrow bands, that they may even be deliberate – though I struggle to imagine why anyone would bother to create them. It looks like some awful old video banding.

The 1.78:1 image, once we get underway, is actually very decent. The palette is suitably earthy and dour, the aesthetic one that favours the cold, rainy and overcast environment of rural Donegal. Skin-tones can be quite ruddy, but this also complements the bleak and muddy rustic appeal of the rest of the picture. The searing orange of flames during the ritual and from the torches held by onlookers burn through with vigour. Candlelight looks good, without being just a bright, warm fuzz.

Detail is a mixed-bag. There are some shots in which it is finite, from the skin texture in close-ups to the furnishings or buildings in the background, but others that become quite blurred and soft from the middle-ground backwards. Again, hair can sometimes be closely defined, as can the weave on Arthur's clothes, but these incidentals can also be lost and obscured during other similar shots. The little beads on the Druid abacus look fine, as do the twisty wooden gnarls of the dead-necklaces. The nasty bits are given some clarity too, such as the wounds and the skeletal finger-snipped from a corpse.

There is great benefit afforded by the deep blacks, really adding some strong shadow definition, although this is let down by the day-for-night photography during a couple of scenes. Contrast, overall, is very good. The picture during the grave-robbing scene is particularly good at revealing the contrast, as shafts of detail – faces, a cleaved coffin, a dead countenance etc – show up in the torch-beam. There are some flashback scenes to Alice's life that are deliberately blitzed with high-contrast to give them a stylised and emotional resonance, and the disc makes sure to retain this. There were a couple of times when whites seemed to bloom a touch too harshly – Patrick's smart shirt, for example – but, on the whole, this is a well-balanced image.

Transfer-wise, there is some edge enhancement, but it is slight and very unobtrusive. Aliasing is also in evidence during a couple of instances, but once again it is minimal and should not pose a problem to anyone. The image is never smudged or smeared. Colours stay within their boundaries without bleeding. Untoward noise level are not an issue. Obviously we want a Blu-ray edition to arrive but, for now, this is certainly serviceable enough. We have a Dolby Digital 5.1 track that does reasonably well at conveying the mood and the menace and the creeping unease of the film. Natural ambience is brought out well enough to depict the rain and the wind, which can sift and meander and emanate from all around, and the haunting score from David Newton becomes an omnipresent character in its own right. He employs lots of ethnic percussion, as well as glass bells and metal chimes to memorable effect. These come over very well across a wide stereo front and a reasonably deep soundfield. He also utilises a steady, rhythmic breathing sound which occasionally reminded me of the synthesised “rasping” that we hear on the soundtrack to Jorge Grau's superior early zombie film, The Living Dead At Manchester Morgue. This becomes symbiotically linked to the turning of the wind-turbines which, during a later scene, whirl and whump through the mix with good steerage.

Dialogue is always clearly rendered. We get some fine and realist spade-cuts through the earth, some grim squelching during a couple of deaths, and thunder ripples across the top of the mix with pleasing naturalism. The rears pick up plenty of bleed-through from the fronts, helping to keep things enveloping. One or two effects are thrown out behind you too, which is nice, though nothing is likely to have you jumping out of your seat. This isn't the most dynamic track you will have heard in the lossy format, but it doesn't make any mistakes and attempts to bring some fullness to the proceedings. We basically have a cluster of interviews with the cast and the writer, the director and the producer that are culled from the same series of sessions.

Out of this assortment, which, all combined runs for around twenty minutes, we learn the genesis of the production, how the story evolved and how the stars interpreted their roles and got inside of their characters – after a day working with a real vet, Aidan Gillan could apparently carry out a a real caesarian-section on a cow. Yeah, right. It all feels very British and has the air of a series of Film Two-Thousand-and-whatever style promo interviews about it.

There is a slew of Deleted Scenes, including an alternate version of the big resurrection scene, but really none of this actually adds anything, and we can see why they were dropped.

As well as Teaser and Theatrical trailers for the film, we get some for other Momentum releases, including one for the fun, but dumb Damned By Dawn. Only delivered to the home market on DVD for the time being, Wake Wood is fine, if disturbing entertainment that helps to solidify Hammer's dark return.

Moodily shot, and drenched with pathos, David Keating's Oirish occult chiller builds slowly but surely, remembering to keep characterisation as its primary concern before finally heading for the bloody woods. If the story ultimately sacrifices some of this redolent atmosphere for the obvious bankability of much more standard hide-and-kill fare, and may even induce a groan or two from fans of Drag Me To Hell for one audacious steal, it is worth remembering that it is part of a wonderful little sub-genre of rural terror that may include some stinkers like Children Of The Corn and The Guardian, but can also cite The Wicker Man, Dead & Buried and Pet Semetary amongst its number. In fact, if there is a problem with this grimly poetic yarn, it is that you can spend quite a fair chunk of the running time check-listing the numerous influences and inspirations that have gone into Wake Wood's glowering DNA. Yet, despite some contrivance and a climax that threatens to drop the ball, this is the sort of thing that makes you feel suitably clammy and uneasy. And it offers up a nasty little moralistic dilemma that you are sure to be mulling over for some time after the film has ended.

Momentum's disc comes with some interviews that break the film down into conception, style and execution. The image is certainly appealing, as is the trance-like audio-mix. With the film playing at the flicks at the same time, you've got two options to catch Hammer. If this review disc hadn't already landed with me, I know that I would have made the effort to see it on the big screen. But then there's always The Resident, isn't there?