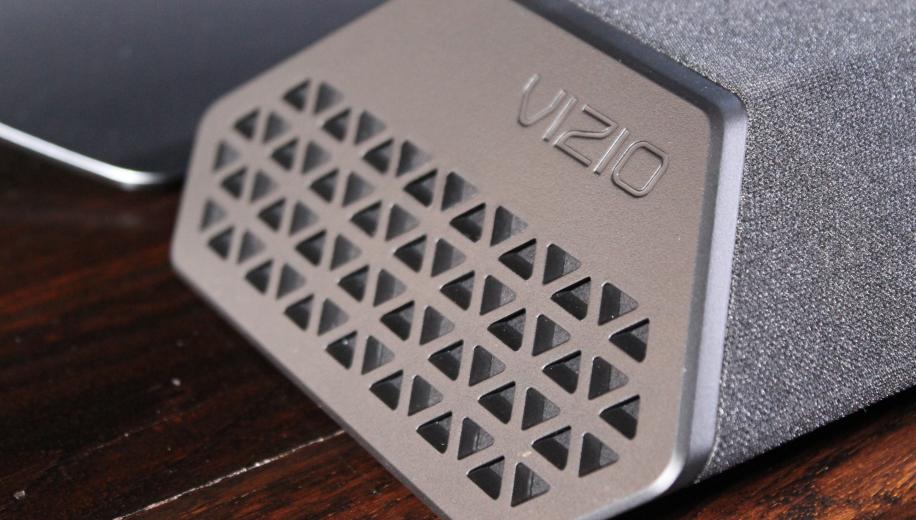 
The Vizio SB362 is the first UK offering from a TV and audio brand that holds the number one spot in terms of soundbar sales in the States. The company, which is also the number two brand in terms of TV sales, has built its US success on delivering the latest technologies at competitive prices. For example, Vizio was one of the first manufacturers to include Dolby Vision on its TVs.

The SB362 is a 2.1-channel all-in-one soundbar, designed as an entry-level option for those wanting to boost the sonic performance of their TV without breaking the bank. It’s not bursting with features, but you get Bluetooth and support for DTS Virtual:X. The 36-inch soundbar is ideal for smaller screen sizes, and can be picked up for £149 as at the time of writing (October 2019).


The Vizio SB362 has an interesting design that immediately helps it stand out from the crowd. It has angled end plates and uses a hexagonal shape that’s actually rather eye-catching, if a bit 80s sci-fi. The end plates use a triangle motif that complements the overall look, and the right hand side has some basic controls that use matching triangular buttons.


There’s a simplicity to the design that’s both space-saving and unobtrusive. The build quality is fairly good for the price point, and there’s a black fabric grille that covers the front, top and rear. The SB362 can be placed horizontally on a cabinet in front of your TV, or flat against a wall using an included template and mounting brackets.


The design is a bit 80s sci-fi, but the unit is well made and unobtrusive


The Vizio SB362 houses all its connections in a recessed area on the underside of the soundbar. There’s a space at the back to run the cables (including the two-pin power cord) into the recess, thus allowing the soundbar to sit flat on a cabinet or flush against a wall.


The connections themselves are very basic, with only an optical digital input, a 3.5mm analogue input and a USB port for music playback from a thumb drive (WAV and MP3 only). There’s also built-in Bluetooth for a wireless connection. There’s no support for HDMI, but Vizio helpfully includes optical, 3.5mm to 3.5mm and RCA stereo to 3.5mm cables in the box.

The controls on the soundbar itself are fairly basic, with buttons for power on/off, source, Bluetooth (hold down for pairing), and volume up/down. However, the included remote is better than you’d expect for a budget soundbar – it’s fairly big, well-made and comfortable to hold.


All the controls are located on the upper half of the remote, with power, input and Bluetooth at the top. Beneath these controls are buttons for volume and playback, and under those you’ll find buttons for DTS TruVolume, mute and engaging DTS Virtual:X. Finally, there are buttons for adjusting the bass and treble, as well as choosing between two EQ modes (Music or Movie).


The Vizio SB362 uses an all-in-one design based around a single-box soundbar with 2.1-channels built-in. The two channels are each composed of a 2.5-inch full-range driver and a tweeter, while the lower frequencies are handled by two 3-inch woofers.


The SB362 measures 914 x 132 x 53mm (WxDxH), making it ideal for screen sizes up to 55 inches, and its height shouldn’t block your TV screen. Despite its relative size, the soundbar employs digital signal processing to create a bigger virtual surround presence.

There are a number of different sound modes, depending on the desired effect. The DTS TruVolume mode (TVOL on the remote) is designed to deliver a consistent and comfortable volume level – which is handy when watching commercial TV channels with advert breaks.


There’s also the equaliser mode, with a choice of Music or Movie settings (the latter is the default). You can toggle between the two using the EQ button on the remote, and the music mode emphasises the two channels, while the movie mode boosts the bass.

Finally, there’s DTS Virtual:X which creates a virtual surround experience using psychoacoustic processing. You can toggle between on and off using the VRT:X button on the remote, and while the mode doesn’t create a genuine surround experience, it does give the audio greater presence.


The drivers used are actually rather good, and the DTS Virtual:X processing is surprisingly effective


The Vizio SB362 is extremely easy to set-up, simply place it on a flat surface in front of the TV. The soundbar’s low form factor shouldn’t block the screen, and the more solid the surface, the better the bass. If you’d rather wall mount, just use the included template and brackets.

Once in place, all you need to do is connect the soundbar to the TV using one of three provided cables: optical digital; 3.5mm to 3.5mm; or RCA stereo to 3.5mm. The optical digital cable provides the best quality option, but the 3.5mm input can be used for another device.


For testing, I used an LG OLED65C8 with all the sources connected to the TV and the audio sent to the SB362 via optical digital. I also connected my iPhone X using Bluetooth, which simply involved holding down the Bluetooth button on the remote and pairing the two devices.

The day-to-day function of the SB362 is very simple thanks to the provided remote control. The only issue is the lack of a proper display, with the soundbar using a row of LEDs in the centre of the leading front edge of the cabinet. These LEDs use different permutations to indicate different modes and settings, but they’re virtually impossible to remember without resorting to the manual.


Set-up is easy and operation is simple, aside from interpreting the annoying LED display


The Vizio SB362 delivers a solid sonic performance that will definitely be better than the built-in speakers on your TV. The soundstage is fairly wide, and given the screen sizes this ‘bar is aimed at, the performance is certainly big enough. There’s a reasonable amount of amplification, and the SB362 should be capable of handling a small to medium-sized living room.

You can drive the Vizio fairly hard before it starts to sound strained, but obviously, don’t go mad or the sound will ultimately run out of steam and begin to distort. However, for more sensible volumes, this soundbar delivers an accomplished audio presence that works with music, TV shows and movies.


Thanks to the 3.5mm jack, USB port and Bluetooth connection, you have plenty of options when it comes to listening to music, and the SB362 handles itself extremely well. There’s good stereo imaging, with a focused performance that retains detail and clarity. While it’s fair to say that no-one buys a soundbar just to listen to music, at least if you do, the Vizio has you covered.

Of greater importance is how a soundbar performs with TV shows, and here the SB362 remains equally as impressive. The soundbar’s use of decent drivers, combined with its speaker configuration ensures a solid foundation for most TV shows. The lack of a dedicated centre channel could have been a problem, but in reality, dialogue remains clear.


This impressive performance continues when it comes to movies, although here the soundbar’s limitations are more obvious. The reproduction of music remains good, and dialogue still has clarity, but the placement of effects is obviously focused at the front of the room. The amount of bass is also fairly limited, and not a patch on a soundbar with a separate subwoofer.

Watching a bass-heavy movie like Aquaman reveals a performance that manages to retain much of the film’s energy. The front soundstage certainly has plenty of oomph, and the dialogue is clear, but the lower-end lacks the dynamic impact that bigger soundbars are capable of rendering. However, in general the SB362 still manages to deliver a satisfying performance.


The various sound modes also fulfil their roles, with TruVolume proving useful at keeping the audio balanced as live broadcasts from the Rugby World Cup cut to advert breaks. The included bass and treble controls are also handy for tailoring the sound to your personal tastes. The music mode works well with two-channel, and the movie mode adds more bass to film soundtracks.

However, the best mode is DTS Virtual:X and, as long as you manage your expectations, it can prove surprisingly effective. This mode can’t really create a surround experience, but it does give the soundbar a sonic presence that has more height and greater depth. Watching Mad Max: Fury Road, the disembodied voices at the beginning hang in the air, and the action scenes feel bigger.


The sound quality is impressive, although the bass is somewhat lacking


The Vizio SB362 delivers a surprisingly good performance for an all-in-one system at this price point. Its unusual design might appear slightly 80s sci-fi retro, but it’s well made and does a good job of slotting in front of a modern TV. There’s also the option to mount the soundbar flush against the wall but either way, it’s fairly discreet.

The SB362 is reasonably well-made and has a proper remote control, which makes a nice change. The connections are limited to optical digital, 3.5mm analogue, USB and Bluetooth, but at least Vizio includes all the cables you need. The feature set is also fairly limited, but the SB362 can decode Dolby Digital and DTS, plus it has DTS Virtual:X processing.

The soundbar uses a 2.1-channel configuration, and thanks to two mid-range drivers, two tweeters and a pair of woofers it actually sounds rather good. There’s enough power for the soundbar to fill a small to medium sized living room and, as long as you don’t push it, the performance will undoubtedly please those looking to improve on their TV’s built-in speakers.

The DTS virtual processing can’t perform miracles, but it does give the sonic signature more three-dimensional presence. There’s a degree of height and depth that isn’t there with the processing turned off, and it certainly enhances film soundtracks. Unfortunately, despite the two 3-inch woofers there isn’t much bass, and the Vizio certainly can’t compete with a soundbar that uses a separate subwoofer.

Overall, the Vizio SB362 is a good little all-in-one solution that delivers a solid performance and holds its own against similarly priced soundbars. It certainly comes recommended, but this is a very competitive segment of the soundbar market, and there are a number of excellent alternatives.

If you’re looking for an effective all-in-one solution, then look no further than the Q Acoustic M3. This soundbar costs slightly more at £169, but it boasts the company’s usual superb build quality and attractive design. It also delivers the goods sonically, and despite the lack of a dedicated subwoofer, even manages some decent bass. The remote control is disappointing, especially compared to the Vizio, but there’s an HDMI connection with support for ARC. Overall, this is a good single-box solution that comes recommended.

If you like the idea of a discreet soundbar but would prefer a separate subwoofer and deeper bass, then you won’t find a better choice than the Wharfedale Vista 200S. This excellent ‘bar and sub combo can be picked up for just £179. Overall, it delivers a great audio performance, and generally sounds slightly better than the Vizio. It also benefits from a wireless subwoofer, producing some pleasingly deep bass. The remote control is small and fiddly but the Vista 200S includes an HDMI connection with ARC, making this 2.1-channel system a definite best buy.