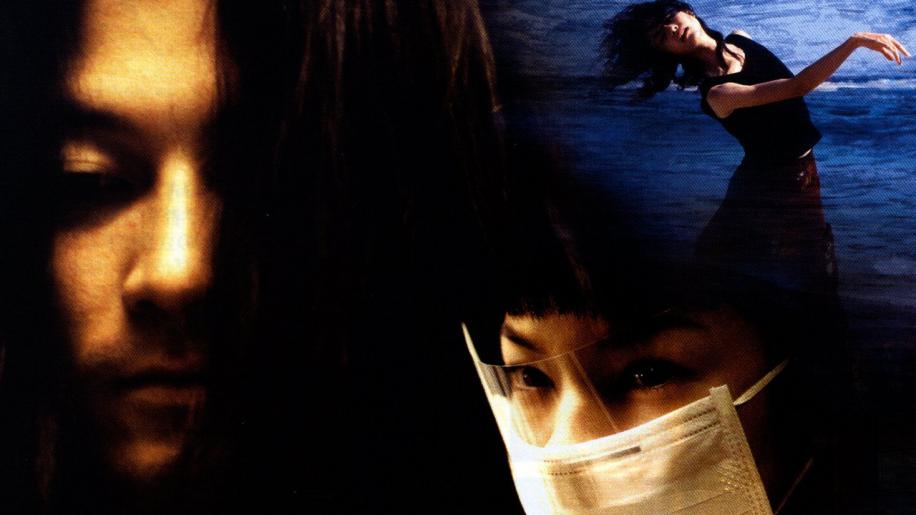 Framed at 1.85:1 (not the 1.78:1 that the cover suggests) and anamorphically enhanced for 16:9 displays, Tartan have done a fine job. Tsukamoto's colour scheme is luxuriantly reproduced, with deep orange tints, the cold blue filters and the vibrant green of nature appearing well saturated with no unsightly colour bleed. Contrast is good rather than outstanding, as blacks can sometimes seem a little crushed which leads to a slight loss of shadow detail. It's nothing serious though.

Detail levels are excellent while grain is largely subdued, but there's still a slightly rough texture to the transfer which keeps it looking nicely film-like. Compression is very good - although this is not a surprise with such a short film (a slender 82 minutes, although the cover states 85) that's composed of many static shots - a fact backed up by the extremely high average bitrate (see below). The worst offence that this transfer commits is noticeable edge-halos, but thankfully they're not too intense and are only really apparent on longer shots. This really is a fine transfer. Tsukamoto's sound mix, as mentioned above, is a very visceral affair. We get three options for home presentation on the disc, all in the original Japanese language (no bad dubs here). The film was originally mixed in DTS Stereo which is not a discrete multi-channel format (a reflection of the low budget), but on their DVD Tartan have seen fit to include a Dolby Digital 5.1 track and a DTS 5.1 track, as well as Dolby Digital 2.0 Stereo.

The three mixes are all quite similar, with dialogue cleanly rendered, Chu Ishikawa's often-imposing music coming across well and those deliciously juicy sound effects really standing out. The discrete surround mixes are superior to the stereo track in terms of overall atmosphere though, with slightly more articulate use of the rear channels and clearer bass (not that there's a lot around). I was hard-pressed to tell the Dolby 5.1 and the DTS 5.1 apart, the latter maybe just having an edge due to slightly crisper vocals and sound effects. Yet I couldn't instantly compare them on the fly because Tartan, in their infinite wisdom, have disabled that facility on the disc. Basically, both tracks do an unspectacular but solid job.

But when I compared certain scenes between the 5.1 mixes and the stereo track, I was surprised to notice that some effects stood out more on the latter. The squelches etc are more pronounced on the stereo mix, making the dissection scenes even more unsettling. Worse, there is also a high-pitched whining sound present during some moments in both 5.1 mixes (listen at the 20:00 minute mark for an example if you have the disc) which is simply not there on the stereo track. Is this an unfortunate lack of quality control with the 5.1 master, or a Tsukamoto-approved addition to the sound design? Unfortunately I don't have an answer... Vital is surprisingly well-featured. There's nearly an hour of additional video content plus an audio commentary, and most of it is well worth taking in. The Audio Commentary by Tom Mes (author of Iron Man: The Cinema of Shinya Tsukamoto) is very good, the man hosting a Bey Logan-style track in which he provides a lot of detailed information delivered with good pacing. This ranges from anecdotes about the production (having actually been on-set during much of the filming) to various comments about the imagery, the themes that Tsukamoto explores, information about the actors and so on.

Next is the 'Making of Vital' featurette, although it's blandly called Behind The Scenes in the DVD menu. Running for over 18 minutes, it's a compressed look at the film's 7-week shooting schedule, comprised mainly of on-set camcorder footage with a few words from Tsukamoto mixed in. It's light but informative. (There's not a lot of spoken narration on any of the extras, but instead subtitles are overlaid which tell us the date, where we are, what's going on etc. This being a Japanese featurette, the subtitles are in Japanese with English equivalents generated at the top of the screen. The other featurettes follow a similar camcorder-footage-with-subtitles template).

The World Premiere Footage featurette is a 10-minute look at the world premiere of the film, following the director and stars around as they do their best not to get worn out endlessly promoting the film at the Venice Film Festival. The Cast and Crew Q & A (recorded at a screening of the film) runs for a couple of minutes and is barely worth bothering with, featuring nothing more than fluffy sound bites.

The Making The Props featurette (actually titled Body Moulding: Hisashi Oda) clocks in at 10 minutes and looks at the making of the bodies used in the film by long time Tsukamoto collaborator Oda. It's rather dry, but does offer some insight into the work that went into creating the corpses and also Oda's own experiences researching the subject matter.

The Shinya Tsukamoto Interview lasts for 11 minutes and gives us a look inside the mind of this celebrated director as he elaborates on the themes and ideas that informed Vital, and it ties with the audio commentary for best feature on the disc. Finally we have the Music Video of 'Blue Bird' by Cocco. Seeing as the song plays out over the end credits this really wasn't worth including, not least because it isn't actually a proper video, being just a montage of clips from the film. Nice song anyway. No theatrical trailer is included, which is a pity as I always find those little adverts to be mildly diverting and sometimes even interesting, which can also be said of Jonathan Clements' brief Film Notes in the insert that accompanies the disc. Vital is hailed as “Hypnotic and severely beautiful” on the DVD cover - I agree with the second part. It's not so much “hypnotic” as soporific however, such is the lack of interest that I had in the film. Director Shinya Tsukamoto has an eye for composition and firm ideas of what he wants to communicate, but here he has crafted them in such a wilfully ambiguous and fragmented way as to make Vital very hard going at times. As Tsukamoto-san says in one of the extra features: “Because there is no truth, we cannot find it”, which might fulfil his artistic intentions but makes for an ultimately unsatisfying film.

Tartan's DVD is a fine package however, featuring a very good audio/video presentation (slight niggles with the 5.1 mixes aside) and some decent extra features that shine plenty of light on the motivation behind the film. There are a couple of dud features in there, but the commentary is excellent, as is the interview with Tsukamoto.