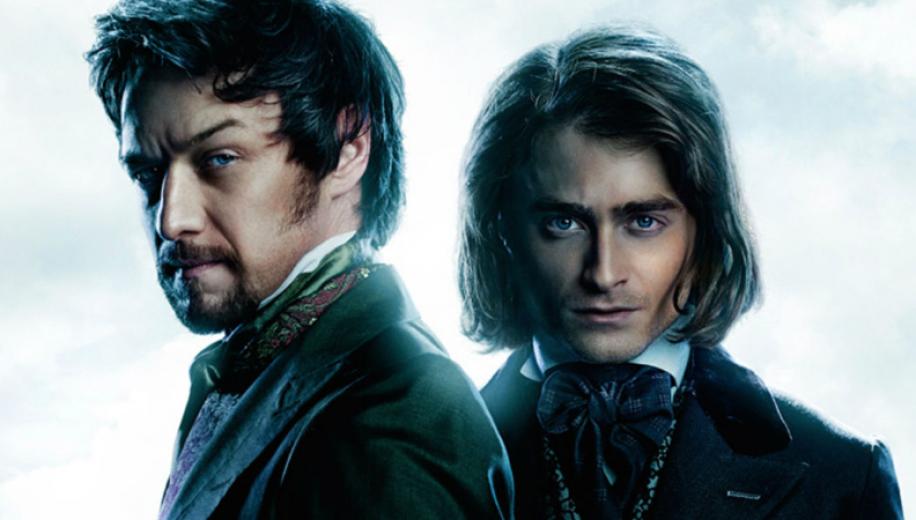 Despite the title, Victor Frankenstein is actually told from the perspective of Igor Strausman.

‘You know this story…’ are the words used to open the film and yes, we are all familiar with the story of Frankenstein’s monster, whether it be from the original gothic novel itself, written by Mary Shelley in 1818, or from the numerous adaptations that have graced the screens - and now another interpretation has surfaced to add to the already lengthly list. Director Paul McGuigan has joined forces with writer Max Landis to bring us Victor Frankenstein. We are introduced to Igor Strausman (Daniel Radcliffe) who begins as a nameless hunchback working as a clown as part of a circus, frequently having to endure several beatings during performances all for the public's evening entertainment, and who also doubles up as a physician to the rest of the performers. It’s during a trapeze act gone wrong that Igor meets Victor Frankenstein (James McAvoy).
Realising that this cowering freak has a brain clearly meant for bigger and better things, Victor returns under the cover of nightfall to break Igor free from the hellish circus he has been a prisoner to. After a chase through the circus grounds involving a strong man, a knife thrower and various other acts Victor and Igor find themselves back at what Victor calls home, which is more like a luxurious science laboratory. Having drained what turned out to be a cyst, in a rather foul scene, and strapping a back brace on, Victor Christens his new assistant Igor Strausman. Igor, it turns out was Victor's old flat mate who liked to partake in recreational drug use and who’s been conveniently missing for a while now. With a new assistant in tow, Victor can finally begin work on a project that he believes will garner him with all the notoriety and success he could ever imagine. Set in a dark and gloomy 19th century London Victor Frankenstein tries to offer up something new and different, and it sort of manages to do this through telling the story from Igor’s point of view. But I’m not sure that’s enough to really make this film stand out from all the other attempts at depicting Shelley’s masterpiece. The film is almost played out like an origins story, but doesn’t really go to any great length to truly show how Victor got to the point of bringing dead flesh back to life. There are a few glimpses of his past with a small cameo from Charles Dance as Victor’s father which is used to refer back to a childhood memory later in the film.

Thrown into the mix is Inspector Turpin (Andrew Scott) who’s investigating a series of missing animal parts from the nearby London Zoo and Royal Veterinary College as well as a possible murder at the circus. Turpin soon stumbles across Victor and Igor’s path and is certain that they are up to something un-Godly. Turpin works to counterbalance Victor’s extremely progressive thinking as Turpin is clearly of a devoutly religious mind. They are positioned in opposition with each other’s thinking and actions extremely well throughout the film, even down to their choice of wardrobe; Victor is rather flamboyant dressed in a multitude of colours whereas Turpin is reserved donning various shades of grey.


Like the parts of the monster, another attempt at an adaptation should have been left well alone.

As the film develops so does the relationship between Igor and Victor into something which mediates between heavy bromance and homo-eroticism, however any potential romance between the two men is laid to rest with Igor’s love interest Lorelei (Jessica Brown Findlay), a trapeze artist from his circus days, who like Igor has been rescued from circus and given a new life. Lorelei is witness to the grand unveiling of Victor and Igor’s first attempt at creating life and it’s this scene, along with an earlier scene featuring their creation, that work to make up for the heavily dull dialogue riddled throughout the remainder of the film. These scenes, along with the films finale, serve to show the film’s scientific side but unfortunately they're not nearly frequent enough.

Radcliffe does well to distance himself from his former role as Harry Potter and plays Igor with a definite human morality, desperate to retain his new life by pleasing his master but conflicted with his own thoughts on the act of playing God. McAvoy meanwhile is clearly the star of the show as Victor, flitting between depraved lunacy to engaging in light hearted and mildly humorous interactions with Igor. McAvoy and Radcliffe are good in their roles, but the film doesn’t seem sure of itself and feels as stitched together as the monsters they are creating - ready to come apart at any minute. Mark Gatiss makes a small appearance towards the end, contributing towards the impression that McGuigan was calling in a few favours from his Sherlock days to help bulk out the cast and film.

Victor Frankenstein is a mildly entertaining film, with some half decent special effects, the occasional laugh and a few explosions thrown in for good measure. It’s one way to pass an afternoon, just don’t expect anything drastically different from what you’ve already seen in the way of adaptations.