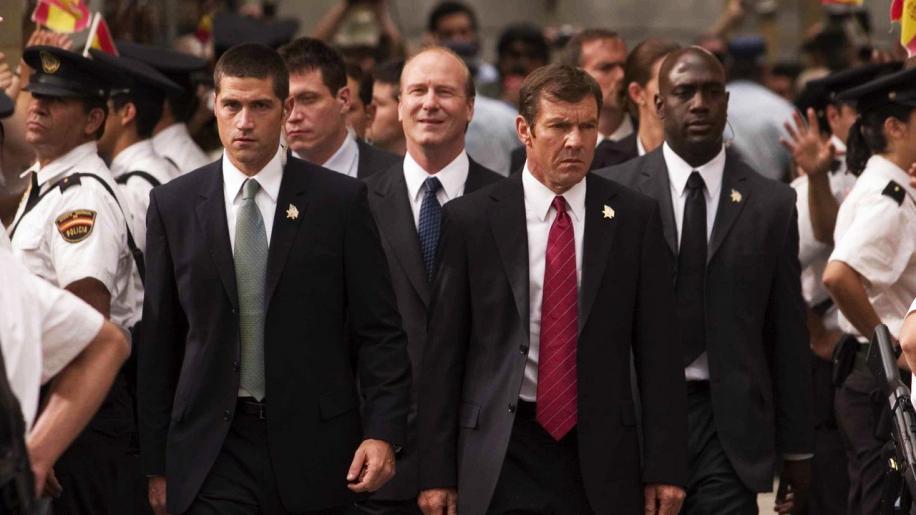 With a snap-shot premise that is immediately reminiscent of Antonioni's Blow-Up, and naturally by extension Brian De Palma's audio-based remake Blow-Out, the whip-crack hyper-immediacy of 24, the monotonously ever-popular terrorist/Presidential assassination scenario and the whole pop-jock multi-media vibe of Post 9/11 reportage, Peter Travis' Vantage Point, for all of its high-concept chicanery, breaks absolutely no new ground. It does, however, give a new lease of life for the never-quite-hit-the-mark Dennis Quaid who plays the US Secret Serviceman caught right in the middle of a situation that distributors and ad-men love to call high-octane. There may be other stars dotted about the crisis, among them Lost's Matthew Fox as fellow suit 'n' earpiece agent Kent Taylor and Bourne Ultimatum's Edgar Ramirez, and all with their own unique spin on the unfolding drama, but it is Quaid's haunted Thomas Barnes (he has already taken a bullet for William Hurt's President Ashton and this fateful day is his first back on close protection detail) who commands the attention when everything goes pear-shaped.

We are in Spain to stand witness to a global anti-terrorism summit, when shots ring out and the President falls. During the ensuing panic, bombs go off and casualties litter the square like singed ticker-tape. The event is caught on American TV by Sigourney Weaver's anxious GNN news producer and her outspoken roving reporter, as well as by Forest Whittaker's gawping tourist on his own camcorder. Various shady types have met in the crowd and exchanged plans or wary glances and, just before all hell breaks loose, eagle-eyed Barnes has seen something glimmer behind a twitchy curtain on a balcony above the square. The bullets and the blast are replayed for us from these various perspectives - or vantage points - the film visually rewinding itself back to a distinct juncture only minutes before the atrocity, but time enough to flesh out motivations and a sense of character for each participant in the ensuing events. The culprits - or at least some of them - are immediately apparent and when the quick-thinking Barnes takes at peak at Whitaker's raw footage and then the film that was caught by Weaver's TV cameras, he sees something else, something shocking and pivotal that will propel the movie into the fast-cut, rapid-fire chase thriller that director Travis and writer Barry Levy have been itching to unleash upon us all along. To say anything more about the action and the revelations that occur over the next few explosive moments - for the film's time-frame literally is just a handful of vitally important minutes from assassination to denouement - would be a crime. Sufficed to say that Vantage Point tries its damnedest to hurl some savage twists in your path - some you will see coming, others you probably won't.

The gimmick of watching the same event several times but from different personal perspectives is initially intriguing, but soon wears thin, particularly as things eventually overlap with just a different camera angle to add some spice. Thus, with a film that is so obviously stitched together with a kind of cinematic Frankenstein effect seeing elements of Bourne, In The Line Of Fire, Nick Of Time, Phonebooth, Crash and even Groundhog Day scrambling about in the mix, the initial scenario gets shown up for what it really is - simply a hook to draw audiences in to an otherwise steadfastly generic action thriller for the Jack Bauer brigade. For his first actual feature film, though, this is still quite an audacious stab from British director Pete (Omagh)Travis. The plot may be slight but it is elaborate enough to get the juices going, and then, complicated further by virtue of the multiple-viewpoint set-up, he deftly manipulates the narrative with verve and visual dexterity, eking-out the tension with small but tasty new nuggets of information revealed during each successive mini-story. The surprising thing is the sheer level of excitement that he gets once the repeats are all over and the whole shebang starts to come together for the adrenaline pumping final act. Following purposely in the wake of Doug Liman and Paul Greengrass, he even manages to pitch in an enormously wild car chase through the crowded streets that can certainly hold its head up amongst the aforementioned filmmakers' own notable examples of the form in their respective Bourne outings. There's even quite a body-count chalked up throughout the movie - and that is not including the big bombs that go off - providing an edge that fans of covert killings and quasi-commando escapades will surely delight in.

But, as intriguing and as gripping as it all is - and you do want to find out what the hell is going on - the film falls apart under close scrutiny. The script, what little there is of it, is woefully simplistic and by-the-numbers, practically an extended TV episode of Spooks or The Unit, in fact. The characterisations and the various motives that each witness or instigator has are squarely of the one-note, postage-stamp-sized variety and, at the end of it, you may feel breathless but you will also feel like simply shrugging your shoulders over all the fuss. Exciting set-pieces may seem to tumble over one another as you watch, but really you are only seeing what amounts to the same thing over and over again, with an admittedly agreeable testosterone-injected ribbon tied around the package to make sure the caper is a little bit more formulaic.

The really annoying thing is that the one true actor in the ensemble delivers the most overly caricatured and totally implausible performance of the entire show. Forest Whittaker, the lauded and highly capable Forest Whitaker, renders his camcording tourist nice-guy utterly ridiculous and phoney with mannerisms, dialogue and play-school-style interactions that, for me, totally ruined any involvement that he had in the proceedings. His off-the-cuff pursuit of a suspect as Secret Service men hurtle after him in a prolonged and punishing foot-chase is so unlikely that it threatens to derail the momentum that has been so painstakingly built up until that point. Likewise, his faltering and banal relationship with a young girl whose ice-cream he winds-up wearing is corny and stunningly contrived. Nothing he says or does is even remotely believable. Whittaker even bumbles around the packed square as if he is an alien just come to Earth, gawping in awe and wonder at his surroundings. It is a truly terrible characterisation and something that really flies in the face of the talent that we know he has in abundance. But at least Dennis Quaid gets some mileage of his twitchy, neurotic bodyguard and just check out his amazing repertoire of deadly serious expressions when things start to go ballistic.

So, all in all, Vantage Point is a much smaller and far less impactful film than its trailers and advance word would have you believe. Pete Travis fashions a likeable thriller, but not one that stands out from a genre that it is already jam-packed with similar plots, hip time-jolting concepts and disparate characters who all contrive to interweave over one pivotal event.

This gets a 6 out of 10 purely because of the great car chase.

Vantage Point arrives on the cinema screen with a 2.35:1 image that contains an awful lot of detail tracked viciously and rapidly by whirligig cameras a la ... you guessed it ... The Bourne films. But, in its chaotic favour, Vantage Point definitely makes every effort to place you firmly in the centre of things. During the actual plaza-explosion and crowd scenes, the movie can be quite colourful - flags, clothes etc - and the final frantic chase offers plenty of bright police car and ambulance insignia flashing by. Interiors are deliberately shaded and moody, with a very subdued feel. The commando-style attack in the hotel is dealt with in nice light and shadow strokes, contrasting well with the often overblown exteriors.

The hand-held shaky-cam effects can be a tad disorientating, though, so the car chase is something that you will definitely want to have a repeat look at on Blu-ray. A 1080p transfer will also be a good test of fast action and swirling whip-around photography too, so, at the very least, Vantage Point, transferred effectively, should be a nice demo for your system.

Vantage Point makes the most of a boisterous, incident-packed soundtrack that brings into play numerous explosions, gunshots, shouts, car-crunches, screams and impacts. The effect can be bludgeoning at times, but the sound design is keen and authentic with multiple voices and noises emanating from all around and with a real sense of depth and placement. Atli Orvarsson's score is neither too prominent in the mix, nor does it get swamped with the overall dynamics. Dialogue never seemed lost or jumbled to me, and there are plenty of radio-transmissions going on and a complete wall of crowd hubbub and blaring car horns and screeching tyres all vying for airspace during much of the film, so, once again, this will prove to be a great test of a hi-def transfer and a superb workout for your home-system.Slick and solid, Vantage Point is entertaining enough hokum on the surface. Scratch beneath the glossy, shaky-cam veneer and the story is shallow and, ultimately, full of holes. What it says about world politics and the war against terrorism is purely juvenile and knee-jerk. In fact, when it comes to ideology, Levy's screenplay practically gives up with a complete cop-out of an excuse near the end. But, then again, Travis isn't concerned about realism nearly as much as he is about screwing around with a plot that could have been sewn-up in ten minutes flat if it wasn't for the gimmick viewpoint-trickery.

Yet the film is enjoyable in its own breathless right. Forget Whitaker's terrible performance, ignore the quite needless complications of a very straightforward story and just try to admire the directorial overkill that went into the film's construction. Far from great, but enough to while away a fast and furious ninety minutes if you disengage your brain first. Plus, it's funny how forgettable the film is even though it actually tells you its story over and over again whilst it is on!