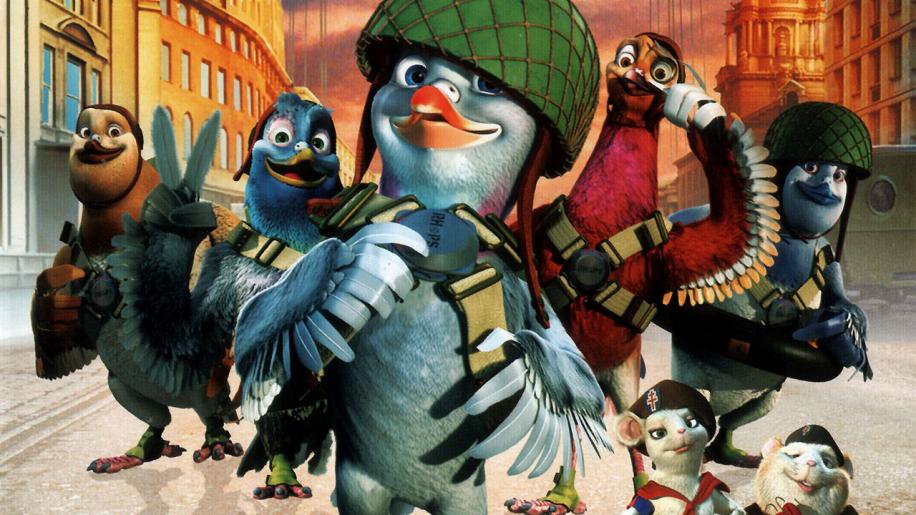 The anamorphic widescreen 1.85:1 image is quite superb as one would expect from a CGI based movie. The colours are rich and vibrant and the black levels are very good. The detail levels, whilst not reaching the best of the Pixar movies are still very good - the backgrounds are never as sophisticated as in the bigger budget CGI movies but the main characters are always well rendered and the transfer does a good job of picking out details such as the individual feathers on the Falcons chest and so on. I could see no technical defects with this transfer and this will show off your system nicely. The palette is more subtle than the big budget CGI movies such as Toy Story but works just as well in it's own way. The Dolby Digital 5.1 soundtrack is also very good - plenty of surround action, a good smattering of bass when required and clearly reproduced vocals. The numerous action sequences are given extra life by the dynamic soundtrack. Again it isn't on a par with the best CGI releases but is still very good. The Dolby Digital 2.0 soundtracks (of which there are two) are also both perfectly adequate for those that don't have 5.1 although for everyone else there is no comparison! The second DD2.0 track is an audio descriptive track. There is a decent selection of extras on this disc, starting with:

Featurette (14m18s) covering the usual behind the scenes footage and interviews with most of the vocal talent including Gervais, Macgregor, Broadbent and so on. This is an enjoyable little featurette, especially for British viewers as we can relate more to the cast and the whole ethos behind the making of this movie.

Scene Progressions: Valiant and Mum (1m23s), The Chase (43s) and Under Attack (1m) - these are a selection of scenes, shown in real time, but progressing from the original story boards, through to basic CGI and finally the completely rendered scene, with the soundtrack in place. It is an interesting way to show how a scene is realised.Recording Sessions - this has behind the scenes footage of most of the main actors (approx 1m each) showing them trying to provide vocals to the video footage. It is interesting from a voyeuristic point of view but also to see how technically difficult it is for them to match what they are saying with what they are seeing in real-time.Bloopers (1m7s) - this is a fun little feature as seen now on most of the CGI movies - bloopers created as if the CGI characters were really making mistakes, such as pigeons flying past their mark and falling off a table etc.World Premiere Pt.1. (12m14s) is a featurette from behind the scenes in Leicester Square for the world premiere of Valiant and if I recall, was originally shown on ITV. It contains clips from the movie, interviews with some of the cast and interviews with various celebrities in the cinema foyer.

World Premiere Pt.2 (9m49s) continues the theme and is basically the second part of the show that would have been shown after the commercial break.

There is also a trailer for Valiant and a very simplistic “game” where you choose formations for your pigeon squad to get through various obstacles - this is all played via the remote control cursor keys and whilst it is a nice idea it won't appeal to anyone but the youngest viewers. Valiant is a great little movie - it's just the sort of movie where I can see the whole family settling down to watch for many Christmases to come. It is refreshing for British viewers to finally have a CGI movie of our own and there are plenty of in-jokes just for us, but like Wallace & Gromit the appeal should be universal. The DVD has a fine image and good sound and the extras are enjoyable too. All in all this deserves a place in any families collection and is not just one for the kids.