And the Worst Script Award goes to... 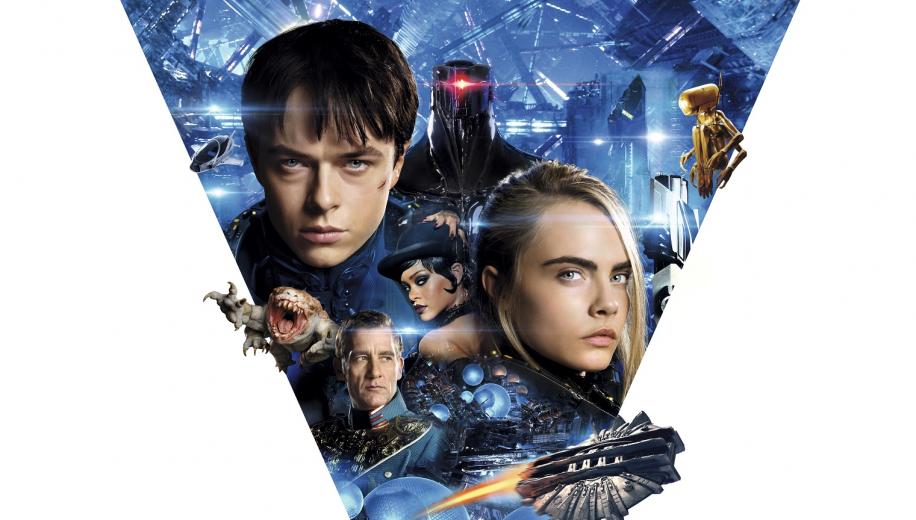 Luc Besson fails to recapture the grand sci-fi-action-comedy blend that made The Fifth Element so magical with this adaptation of the popular French comic book.

Despite being one of the most expensive films in French history, and featuring more effects shots than Rogue One, Valerian and the City of a Thousand Planets falls down, hard, on its face, when it comes to just about every important element required to make a good movie. If it doesn't involve innovative VFX and imaginative action, it's basically 12 year old schoolboy standard. The story is largely a gender-reversed Fifth Element riff, which attempts to cover up its desperate lack of originality by repeatedly going on utterly pointless detours that only feed its painfully bloated runtime. Besson's pretty leads have zero depth, no tangible backstory, are horribly miscast and have no chemistry whatsoever. This renders almost every word of dialogue between them utterly take-you-out-of-the-movie risible. And they have a lot of words.
Besson can't write characters, he can only write caricatures; he can't write dialogue, he can only regurgitate cliches; he can't write a story, he can just remix other, better stories. There are hints of Star Wars/Trek, Avatar, Guardians and, of course, Fifth Element. But whilst, 20 years ago, his flair for imaginative visuals and continental flavouring managed to turn a simple idea into a kooky gem - a brilliant fusion of action, sci-fi and, curiously, comedy - he clearly doesn't have the magic anymore. His comedy is inept and childish (indeed his attempts at 'romance' will likely prove unintentionally hilarious), and whilst his action and sci-fi efforts are admirable, providing some visually opulent landscapes, and utterly stunning effects-laden setpieces (the beach sequence, the VR realm) they are utterly drowned out by the rest of the dross.

Moving away from its actual content, and looking purely at its technical merits and you find that this is one hell of a good looking film. In fact it's downright stunning.

The film was shot digitally at a considerably higher resolution, but frustratingly capped at 2K by its Digital Intermediate, which is - disappointingly - still fairly standard for effects-laden blockbusters of this nature, but the end result is pretty spectacular in comparison to its Blu-ray sibling, and that's even without assessing the further benefits of its Dolby Vision enhancements.


In terms of its picture quality Valerian is downright stunning

Beyond some nominal uptick in outright detail, which does afford skin textures, clothing weaves and background intricacies some measure of improvement over the 1080p Blu-ray, it's really the HDR and WCG that wow here - as it should be - yielding the kind of results that fans of the recent Ghost in the Shell hoped would have been the case on that botched Ultra HD effort. Whilst it's fair to say that you don't expect films like Arrival to pop with vibrant, vivid tones and eye-melting HDR implementation, films like this often need some measure of compensation for the lack of visual pop that comes from watching them in simple 2D (the majority of theatrical showings were 3D), and this presentation does precisely that, rendering bright neons, deep purples, and electric blues with fantastic precision, and giving life to the visually opulent world. Computer visuals, and the City of a Thousand Planets itself looks suitably stunning, drawing you front and centre into this sci-fi extravaganza in a way that the film itself couldn't otherwise possibly hope to do, and the blistering comic book vibe allows the beachfront settings, desert setpieces, forbidden zone canyons and space armadas to spring right from the page to screen with grin-inducing glee. If nothing else, Valerian looks amazing.

Thankfully the visuals aren't the only thing the movie has going for it, with a stunning soundtrack to boot, providing a stunningly immersive aural offering to accompany the visual dreamscape, affording the dire film some distinctive measure of pure audiovisual delight. When the characters stop talking, and Besson's worlds start coming to life, the sheer experience is hard to beat.

Boasting a Dolby Atmos track, the aural foundation is an already excellent and near-perfect Dolby TrueHD 7.1 core, affording Valerian a demo and reference audio presence that delivers dialogue with firm precision and crystal clarity from across the frontal array, whilst it serves up myriad effects with impressive discrete skill. From the energy weapons, to the explosions, to just the subtle electronic effects that bring the various gadgets and tech to life, this is a sci-fi lover's dream come true, as alien beasts roar, giant spaceships thunder across the screen (indeed the brief space battle flashback is its own audiovisual bit of heaven), and futuristic vehicles tear through the desert landscape. The surrounds don't have the time to even think about taking a break, delivering every little aural detail, from the tiniest atmospheric tic to the grandest boom, with power and precision. Similarly the LFE channel appears permanently activated in one form or another, whether lending weight to the explosions or the giant beasts thundering across your living room floor. The score may not be particularly memorable, but it only provides more welcome fuel for this tremendous audio track.

Even on the extras front, things are pretty impressive. Whilst, ostensibly, the Ultra HD Blu-ray disc itself doesn't port much in the way of extras - with the meat seemingly left for the accompanying Blu-ray (a shame, really, because Lionsgate had a decent run of porting across extras but now seem to have abandoned that and reverted to what most of the other studios do) - the biggest extra is probably the branching Enhancement Mode, which is the one supplement that makes it over to the Ultra HD Blu-ray itself and actually comprises over a dozen mini-Featurettes accessible during the playing of the movie.


Even on the extras front things are pretty impressive

The extras don't end there though, with the Blu-ray also including separate copies of all of the Enhancement Mode Featurettes available to play individually, and with a further hour-long Documentary looking into the production in a more conventional - but also thoroughly comprehensive - fashion. Whilst the Enhancement Mode option affords viewers some measure of background into the piece, it's mostly (although not exclusively) technical, and the Documentary gives a more rounded look at the origins, the comic, the characters, the cast, and the production as a whole. The extras package is rounded off by a Gallery and some Trailers.

Trim at least half an hour from the saggy middle, strip it down to the simple core narrative, and thus lose the 10 minute 'flashback/recap/exposition' scene towards the end, and then remove every single line of dialogue between the lead characters (again, Besson's view of 'marriage proposals' appears to be that of a 12 year old boy) and maybe, just maybe, this'd be a fun, flashy, visual ride. Rather than a big, botched, bloated mess.


A big, botched, bloated mess but it makes for a stunning Ultra HD Blu-ray

Thankfully the UK Ultra HD Blu-ray release of Valerian and the City of a Thousand Planets at least looks and sounds utterly stunning, and boasts a decent selection of pretty comprehensive extra features, making this a great demo title, and something of an audiovisual delight. Unfortunately, for many, the mute button will probably be the only way you can get through the risible dialogue but, if you can internally mute the characters, there's probably some measure of visceral enjoyment to be derived thanks to the effects and sheer imagination of the offering. It's just a shame that the rest of this movie pays the price for the wide-eyed glee that this 12-year-old-boy-in-a-grown-man's-body filmmaker can so brilliantly channel, but only when it comes to visuals.