"Where IS Jessica Hyde?" 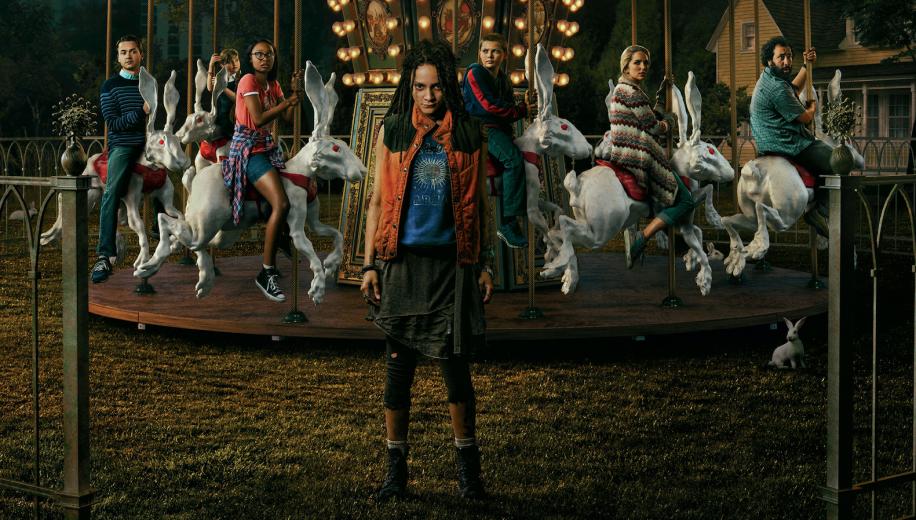 The latest US remake takes on the cult British classic Utopia.

Adapting, rebooting, remaking, reshaping (or whatever we’re calling it this week) a cult classic series like Utopia (2013) was always going to be a tall order. Then again, could there be a more prescient time to be making a pandemic conspiracy thriller? If nothing else, this Amazon Prime release is blessed with a hell of a lot of good timing. Or the worst possible timing. Either way, it’s topical.

All eight episodes have been written by Gillian Flynn (Gone Girl), and the series has actually been in the works for a while – David Fincher was originally attached back in 2018, before the project floated round in pre-production purgatory for a little bit. Eventually the show was set back on the road, with three different directors (Toby Haynes, Susanna Fogel and J.D. Dillard).

The result is slightly weird and wacky American take on the beloved original by Dennis Kelly, which begins in much the same way as the British version. Rival groups are in a secret and covert hunt for the mysterious graphic novel Utopia, which can apparently predict future viruses (I know). There are some shadowy, sinister and frankly scary secret agents known as The Harvest, and a gang of well-meaning nerds who want the comic book after reading its prequel, Dystopia. The Harvest are hunting Jessica Hyde (Sasha Lane), who makes an appearance in Utopia and seems key to the whole potentially world-saving mystery.

The scenes of the gang’s misadventures are where Flynn’s infusion of comedy works best. The nerds’ run-ins with psychopathic agent Arby (Christopher Denham) are charming and funny enough to at least raise a smile. Elsewhere it can feel a bit jarring, as though the taut danger of the original is thrown away in favour of bawdy laughs. The series takes Kelly’s original story and mostly sticks to it, though removing lots of the dark and dangerous style. A couple of details are changed – for instance, in the first episode the gang meet up at a comic-book convention – but it’s strikingly similar how the story unfolds for the most part, which doesn’t really do this new version any favours. It’s not that this show is necessarily bad – it’s just trying to recreate an original that was brilliant and beloved.

Watching new actors try to portray characters that were so memorable and unique last time is tough going. The pacing is quite different too – thing happen much slower and later in the new version, which can be disorientating if you were a devotee of the original. Even many of Kelly’s directorial choices, which were bold and striking and cemented him as a truly original voice in filmmaking have been largely replaced by more middle-of-the-road acceptable choices. Where the original was almost shockingly violent – much like a live action comic-book – this one seems to be much more toned down.

It’s not that this show is necessarily bad – it’s just trying to recreate an original that was brilliant and beloved.

One thing that does work well in the 2020 series are the new characters, like John Cusack’s scientist Kevin Christie and Rainn Wilson’s Dr Michael Stearns. It’s hard to gel the worlds of the show together a little – there’s the weird kind of satirical over-the-top-ness of Christie’s Kushner-esque son (Cory Michael Smith) who runs PR, which clashes with the super-serious Jessica Hyde, which in turn clashes with the bumbling comic-book nerds.

It’s hard not to want more of the misfit gang of loveable “fanboys”, but there is just enough of their charm to make it an interesting and engaging watch. Unfortunately for the show, being about a pandemic during a, erm, pandemic, means viewers will look to it for meaning or commentary or at least a voice. But Utopia doesn’t seem to really have much to say, so you really have to want to be along for the ride just for the hell of it.

It’s obviously not got the originality of Kelly’s version, it’s doesn’t have the same visual verve and it’s always a big ask for actors to step into the shoes of characters who were cult favourites. But, this series is – if nothing else – incredibly topical and timely, which makes it eminently watchable at the moment, as second lockdown looms large. A different tone and new characters are interesting additions, and there are a few twists and turns that make it worth a watch, even if you were an OG Utopia devotee.