Giving the horror genre a shot in the arm 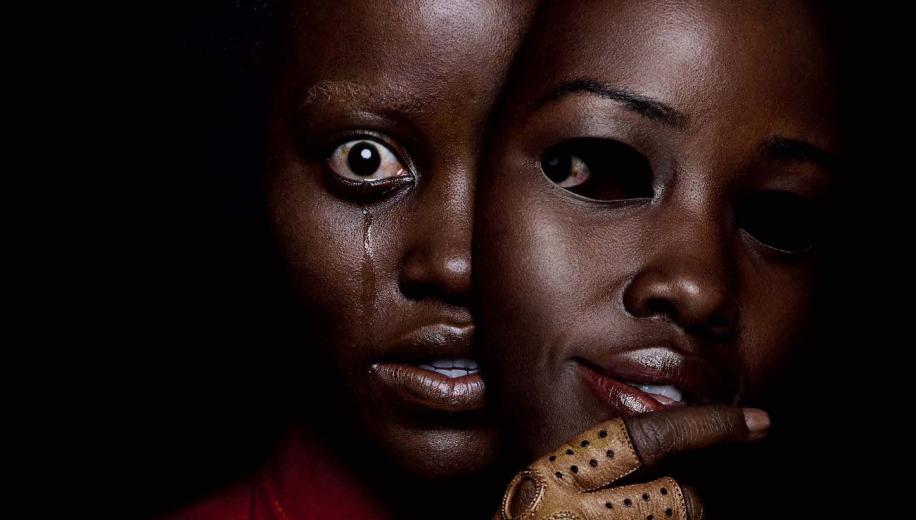 Once upon a time, there was a girl and the girl had a shadow

Some films are clearly inspired by personal nightmares. It Follows is one such film, and so is tonight’s feature; the sophomore effort from director Jordan Peele, who seems to be making some terrific waves when it comes to new horror.

After getting lost at a carnival, 8 year old Adelaide comes face to face with herself, something she has never really gotten over. Years later, she, her husband, son and daughter return to the same beach only to be attacked by a doppelgänger family, but on trying to escape discover that the whole town is under siege and that getting away might mean discovering some dark secrets about themselves.

Peele really knows his craft. By drip feeding the audience, there is a real sense of world building, the characters behave naturally and are easy to identify with. With a pace that allows a build-up of tension by storytelling rather than a reliance on horror tropes or jump-scares, the film unfolds naturally and is all the better for it. Indeed, the first half is terrific and I love the fact that nothing is really explained, only hinted at, leaving the audience to make up their own minds. When the film becomes more of a survival horror, it does lose a little of its verve and whilst the final twist does become apparent, it is sufficiently delicious to allow a wry smile.

Us delivers a fresh take on an older idea and director Peele neither pulls his punches or wimps out. Indeed, after this and Get Out, he seems intent on giving new meaning to the word horror; let's just hope he can keep up the pace. Us was shot digitally using a combination of Arri Alexa Mini and Arri Alexa SXT cameras with a resolution of 3.4K but finished as a 2K DI, which has presumably been used here for this Ultra HD Blu-ray release. The disc presents an up-scaled 3840 x 2160p resolution image in the widescreen 2.39:1 aspect ratio, and uses 10-bit video depth, a Wide Colour Gamut (WCG), High Dynamic Range in the form of HDR10 and Dolby Vision, and is encoded using the HEVC (H.265) codec. We reviewed the Region free UK Ultra HD Blu-ray release of Us on a Panasonic 65DX902B Ultra HD 4K TV with a Panasonic DMP-UB400 Ultra HD Blu-ray player.

There is a modest but noticeable upgrade in terms of detail with staples like skin texture and clothing weaves looking keener and better defined, but it is with the various long shots where the real improvements lie, the landscapes and beaches all appear far sharper and distinct. The line of hands in-between the trees, for example, are perfect, while rabbit fur is soft enough to feel.

Colours are well realised, being bold and strong but also very natural; the blue of the skies or the green of the grass are of particular delight, while the red uniforms are keen. Fire looks so hot, while blood is gloopy and flesh tones are very natural.

Black levels are tremendous, adding punch and depth to the frame, the night attack or down in the tunnels are delicious. The white end is just as good, adding heat to the fire, pushing out the highlights and giving a gloss to the beach.

There are no compression issues and the source is perfect. A good clean image. This Dolby Atmos track opens with some demo material. The carnival scene is awash with a 3D sound scape this is amazing; people walking around, rollercoasters and rides overhead, dialogue in front, with music and crowds behind – there really is a full sense of immersion; and then we come to the opening credits. The track at this point is stunning – the choral voices sit between centre and ceiling, the bass is below, the music left and right while the chimes point at you, truly a 3D experience and an incredible mix.

The rest of the frack doesn’t quite live up to this astonishing opening, but it is no slouch; music in the car, road noise, thumping on doors, waves crashing on the beach – all give a full sense of immersion while sounding perfectly natural. Bass is deep and penetrating, used primarily by the score, but the occasional LF effect adds a decent punch. Dialogue is clear with directionality when needed, while the score makes full use of the speakers. Descending into the tunnels is a nightmare both visually and aurally! Nice to have the extras on the UHD, makes you wonder why the Blu-ray is also included, though.

The Monsters Within Us - 5 minute feature of the examining the portrayal of the main family’s characters.
Tethered Together: Making Us Twice – 7 minute feature that looks at challenges associated with filming the same scene twice with each character in their respective good and bad roles.
Redefining a Genre: Jordan Peele's Brand of Horror – 5 minute back slapping short on the director and his influences.
The Duality of Us – 9 minute discussion of Peele’s fear of doppelgängers, before moving into the film's themes, ideas and direction.
Becoming Red – 4 minute behind the scenes feature looking at Lupita Nyong'o getting into character.
Scene Explorations – Cast and crew discuss three scenes: Seven Second Massacre, It's a Trap, and I Just Want My Little Girl Back.
Deleted Scenes – 6 minutes of excised material: Included are I Am Not Even Near You, Rabbit Season, That's Badass, Driftwood, The P Is Silent, and I Wanna Go Home.
We're All Dying – Another 6 minutes of additional/unused material.
As Above, So Below: Grand Pas De Deux - Watch the full dance routine for 5 minutes. Us is the second horror film from director Jordan Peele, who uses the platform to exorcize the demons of his irrational fear of doppelgängers, and in doing so bring the audience into his own personal nightmare. By telling the story via a character driven narrative rather than relying on obvious horror tropes and jump scares, Peele brings the horror home in a genuinely scary fashion. I hope he continues on this path as he is giving the horror genre the shot in the arm it needs.

As a 4K UHD package, the set from Universal is pretty good; the up-scaled image is an improvement on the Blu-ray in regards to finite detail and colour reproduction, as well as deeper blacks and more refined white levels, while the Dolby Atmos surround track is stunning in its immersion and effects. The extra features, although included on the UHD disc, are too light and fluffy to be of any consequence.