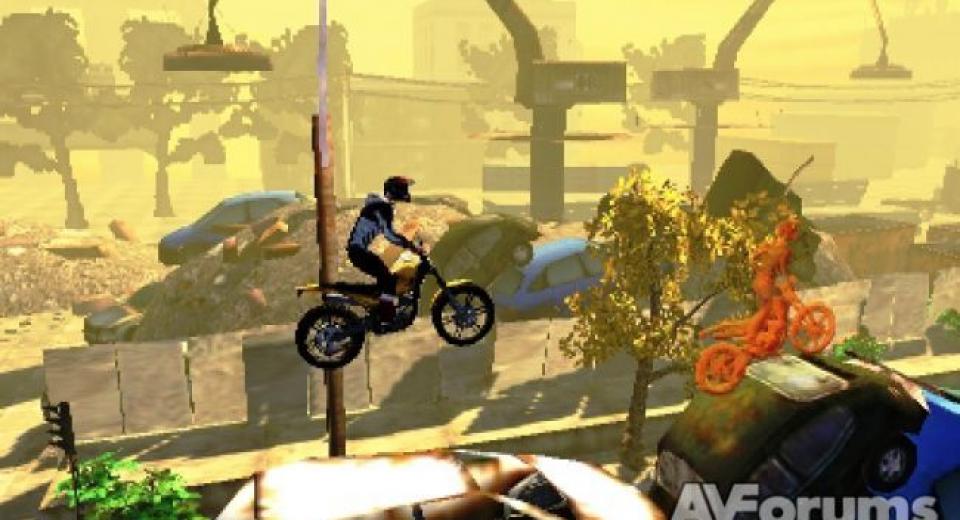 Stop me if you’ve heard this one before: Urban Trial Freestyle is a motocross game with a simplistic acceleration/brake/lean control scheme, offering a selection of fixed-perspective levels that layer three-dimensional visuals around a two-dimensional track. Players are tasked with carefully balancing the inertia of both bike and rider to make their way over various dastardly obstacles and triggered set pieces, each of which gets progressively more spectacular as the difficulty creeps towards 20-30 restarts and constant fine-tuning to get the angle of approach and velocity just so.
To be honest I’m torn here, because on the one hand Urban Trial Freestyle is such a blatant copy of RedLynx’s fantastic Trials that it constantly feels a little shady, but on the other hand, Trials doesn’t exist on the 3DS, and this is a more than competent aping of the “Arrrrgggg! I HATE THI... just one more try” formula.
The main core of Urban Trial Freestyle is a selection of tracks set within themed city zones, played in either Stunt or Time Trial modes. Progression is based on points and graded with up to five stars, of which three-or-above is the magic amount that unlocks further tracks and areas in which to throw your suspension into a wall and hope for the best. There are global and friends’ scores with which to compare your skill, and as with Trials, those are the beating heart of a game that demands that one perfect run. At the basic end, Time Trial mode is as you might expect, and barely a departure from previous games within the genre. Success is as much about twitch skills and memorising the track as it is balancing throttle and brake, but there’s no small amount of fun to be had shaving seconds and creeping further towards perfection. The selection of obstacles and challenges are well-pitched for the most part, requiring understanding of exactly when it’s best to let up on the pace and catch a sweeping downwards ramp to pick up speed; or when to gun the engine for a quick burst of acceleration and angle the bike perfectly onto the rear wheel for a bunny hop up and over whichever detritus is in your path. You may have done this before.
Stunt Mode at least switches up the formula just a little, asking players to perform actions at set points along the track. You might have a high bar to reach on a jump, as an example, or a flip to perform, a target to hit, or a speed gate to pass through. Racking up high scores on each of those sections will earn you stars on a final rating for the track, whilst the scenery in-between just needs to be navigated safely. As such, Stunt Mode demands a little more consideration in approach and cuts down on the pleasant flow of the time trial mode, but the precise nature of each challenge is a welcome chance to show off specific skills. For the most part, Urban Trial Freestyle plays pretty well in both those modes. The control of your rider - whilst lacking some of the physics subtlety brought about with stronger hardware - is nuanced enough to make for a difficulty curve that punishes player-driven mistakes rather than any obvious faults with the engine. It’s not best-in-class when compared to its inspiration, but the nature with which your bike interacts with the environment is commendable given the platform. There are a few oddities along the way and it's a little too forgiving sometimes, but control is intuitive and pliable enough to make for an entertaining ride without too many glitches.
In terms of longevity, Urban Trial Freestyle also contains a somewhat chaotic level editor to whittle away a little more time, although without any means of distributing tracks over the internet it’s a fairly castrated prospect. There’s also a currency system available to purchase the scant few upgrades and visual customisations for your bike and rider, although again, without any robust online offerings, that system is little more than a curiosity; I don’t really want to show off my new natty threads to myself. A few ‘challenge’ levels also show up to pepper the campaign with some novelty goals (tilting the DS to affect gravity, etc), although they're fairly lightweight and too sporadic in nature to add that much in the end.

Although Urban Trial Freestyle is a whole lot better than you might expect, there's still a tugging sensation that something just isn't quite right. It plays well enough considering the hardware limitations and certainly doesn't overstay its welcome, but the grimy visuals and tone don't sit quite as well on the palate as RedLynx's ridiculous offering. Regardless however, it's nice to have a decent stab at a motocross offering on a handheld, and the nature of the platform is ideally suited to Urban Trial Freestyle's quick 2-minute blasts of platform action on the go. This isn't a game without its faults by any means, but there's a good amount of value to be had under those squeeling tyres.