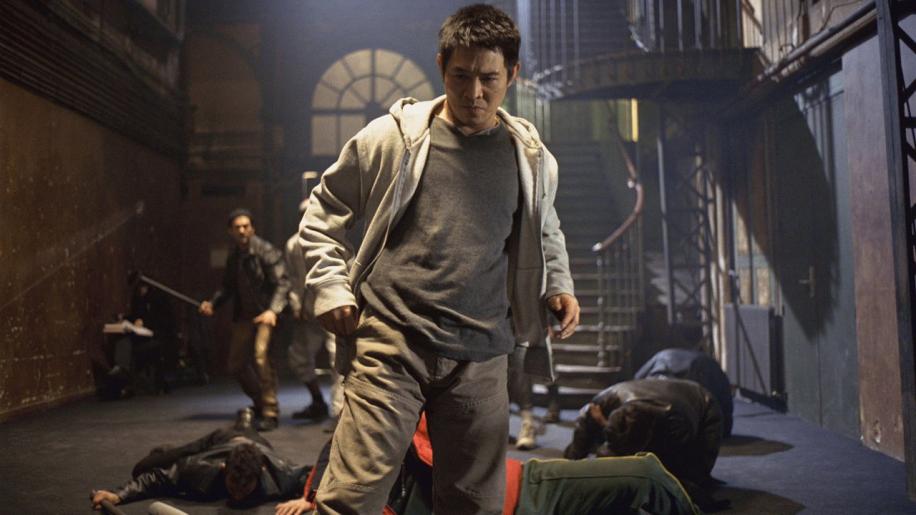 Jet Li is one of the greatest martial artists to have ever graced our screens. Unleashing his ballet-like kung fu skills first in a bevy of Asian productions, he eventually graduated over to Hollywood, securing a role as the lead villain in Lethal Weapon 4 before starring in his very own productions. Unfortunately, he has never really made it big - his films have been very entertaining but none of them have really graduated from the B-movie martial arts action variety (apart from when he returned to Asian cinema to do the superb Hero). Romeo Must Die was entertaining if a bit gimmicky, The One was innovative and his DMX collaboration and Cradle 2 The Grave was disappointing in as much as it wasted the talent of Mark Dacascos, another great - and highly underrated - martial artist. Leon's Luc Besson previously penned Kiss of the Dragon, which provided some solid if unoriginal Jet Li action and then he wrote this movie, Danny The Dog, especially for Li. Yet to break through into A-movie league, will it prove to be the turning point in Li's film career or just another enjoyably frivolous action-fest?

Danny is a highly trained weapon that crime boss Bart dispatches on anybody foolish enough to be late in paying up their debts. Collared like an attack dog, Danny responds only to the command of his master. As Bart scours the underworld collecting monies due, his victims soon learn the pattern - when Bart removes Danny's collar, Danny becomes a lethal weapon. Unleashed and unstoppable. With the collar on, however, Danny is practically mute and dumb - locked in a cage when he is not doing his boss's dirty work. Bart soon finds it profitable to involve his 'pet' in pit-fighting, tapping into a brand new source of income from Li's lucrative blood-sport. Then one day Bart treads on one toe too many and finds himself out of action, with Danny left on the street. There he is picked up by a blind piano tuner who takes him back to the house where he lives with his schoolgirl step-daughter, cleaning Danny up and looking after him. Slowly coming out of his shell, he begins to enjoy the new things he is discovering in his life, but it is not long before his old life comes back, rearing its ugly head and Danny has to fight once more.

Danny The Dog - renamed Unleashed in the States - is probably one of the best Western movies that Jet Li has starred in. Sure, I enjoyed his turn in Lethal Weapon 4, but in as much as more heroic and less clichéd roles go, this is as good as it gets. You can tell that it was written specifically for him, catering for his solid but distracting grasp of English by making his character justifiably speak very little and playing to his strong points - namely, his superior martial arts skills. The fights scenes are simply awesome, with about half a dozen decent fights, one of which is probably the longest and most bone-crunchingly brutal that he has ever done. Each of the fights is both innovative and increasingly challenging so you never feel like Li has an easy time of it combating his often numerous opponents, although the one-on-one scenes are much more convincingly choreographed than the 'take-it-in-turns' multiple combatant sequences.

The trouble is, as is the case with every Western movie Li has made, the story is nothing special. As I've already stated, it's probably the most solid story that he has done - and maybe will ever do - but when you boil it down it is just another martial arts-fest, another excuse for stringing together several brilliant fight scenes. Jackie Chan found a similar problem in the West until he started doing buddy-buddy action-comedies like the brilliant Shanghai films and the Rush Hour series. Even the cumbersome but skilful Steven Seagal, who is currently residing in the depths of DTV hell, once gave us Under Siege, an almost Die Hard calibre action movie. Jet Li has yet to give us a Western film that is not merely the sum of its fight scenes.

However, Danny The Dog is as close as he's come and it is a solid effort. Partnering him with heavyweight actor Morgan Freeman was a clever decision, with Freeman going through the motions - even though Million Dollar Baby proved that he can out-act most, even with his eyes closed - as Danny's blind guardian angel. It was also a safe bet enlisting the sturdy shouting talents of Bob Hoskins as the villain of the piece, stupidly called Bart. Hoskins may never be as good as during his Long Good Friday / Mona Lisa days, but he is still a stalwart performer to bring in and his role here reminds you a little of some of his former glory. Surrounding Li with strong acting talent like this makes up somewhat for his limitations in that department (and I do blame a great deal of it on the language barrier because, as with Chow Yun Fat, Li's Eastern performances certainly have more depth) but the plot holes soon become unmissable and what you are still basically left with is another B-movie actioner. Directed by the man who worked on the first Transporter movie and helmed the upcoming second, The Transporter (also penned by Besson) is exactly the kind of movie you should expect to get here - and that's not necessarily a bad thing. Whilst I may still yearn for Li to return to Asian to pull off some more thoughtful efforts, in the meantime this is kick-ass entertainment to keep you occupied for a couple of hours. So sit back and enjoy.

This is the European cut which runs several minutes longer than the U.S. edition and contains a slightly different ending. As far as I know the differences are mainly to the development of the relationship between Danny and his blind guardian and do not in any way affect the action side of the movie. Still, it is always nice to get the complete version.