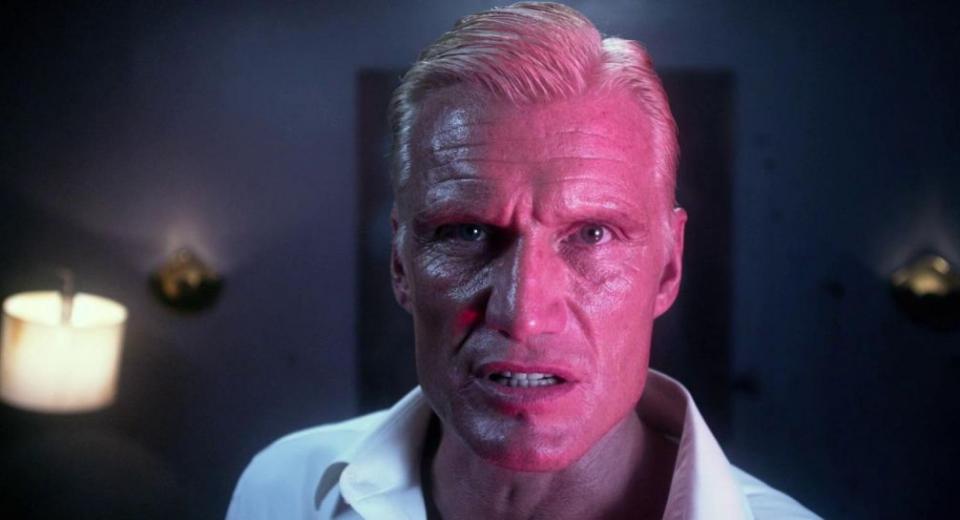 Universal Soldier: Day of Reckoning comes to UK Blu-ray in two packages – the standard Blu-ray which sports just the 2D version of the film (like the US release) and the Limited Edition Steelbook which, although it has gone largely unnoticed, actually sports both the 2D release and the original Theatrical 3D version of the film. Both versions of the film showcase it in its original theatrical aspect ratio of 2.35:1 widescreen, with a 1080p/AVC High Definition video presentation. We’ve had the lucky opportunity of taking a look at the latter to compare the 2D and 3D options.

Shot in 3D, this fourth official entry in the Universal Soldier franchise looks remarkably impressive. Sure, it’s a low budget release in terms of setting, cast and action, but the director really does manage to bring a surprising amount of style to the fore, and the end result is superb.

In terms of 3D visuals, the first-person shots are probably the most expressive, with characters looking distinctly rounded and the shots offering up clear fore, middle and background elements, with several gradations in between. Indeed the 3D is so effective that it allows for a brief comedy moment as Van Damme’s nose – which I’ve never noticed to be particular big – practically sticks out of the screen at you. The combination of first-person shooting and 3D is remarkably effective, however the strobe lighting is not, particularly when you’re trapped within the glasses-wearing 3D world. As already mentioned in the film review, it’s moments like this where the directorial ‘style’ goes too far, and it’s a test of endurance to see if you can actually keep focussed on the screen whilst it flashes into strobe mayhem. Try it.

Similarly there are downsides to some of the costumes – the black-clad villains at the beginning seldom take on rounded shapes: it’s only when we get faces revealed that some depth and roundedness evolves.

On the flip-side, despite the fact that the movie broods in darkness for a great deal of time, Hyams works wonders to craft depth where you’d least expect it – light shadows splaying in through an open door which help accentuate tangible depth into the room; POV ceiling shots allow for an immense amount of depth through the room, crafting decent layers which never drift into 2D cut-out layering, particularly in the brighter daytime sequences.

The action sequences do occasionally allow for some particularly impressive 3D moments – the climax of the car chase, complete with an over-and-under -cranking spin, really flies out from the background. It’s not a stunning use of 3D, but it is much better than I expected from a low budget limited release hard-R-rated (whilst 18 in the UK, the uncut equivalent in the US is distinctly NC-17) film shot in 3D. So, whilst it doesn’t compete with something like Resident Evil: Retribution 3D, Universal Soldier: Day of Reckoning is the better film.

Beyond the 3D elements, the image is very good throughout. Since it was shot in 3D, the distinction in terms of brightness is negligible, although obviously the 2D version does have the edge. Indeed it is a near-perfect video presentation, offering up stunning detail throughout. From the close-ups on faces to the skin texture observation – both bringing to the fore beads of sweat, light stubble and basically every single pore – there is a remarkable amount of fine object detail on offer. Clothing weaves are distinct and set locations, however cheap, have a suitably authentic grimy look to them. The backgrounds to the sets also stand out – you can make out road-signs in the distance or items in shop windows – and basically nothing escapes the immaculate, near-flawless clarity of this image.

The colour scheme is quite limited, but the film does not quite have the cool blue-and-green feel to its predecessor, Universal Soldier: Regeneration, instead coming across as fairly realistic throughout, of course with bursts of exceptional colour stylisation spattered throughout. Particularly effective are the pink neons of the whorehouse, which never bleed and retain vivid vibrancy throughout. Black levels are strong and there are only a couple of very brief moments where the lighting (not the strobe effect, but the actual lights) threaten to damage the integrity of the image. One moment is when we first take our voyage through the caverns of the New Army, where the lights flicker and the image can’t keep up with this effect. Overall though, it’s a near-perfect presentation, and between the solid 3D and the impeccable 2D it earns a strong demo-quality mark.

Slow-burning, brooding and oppressive, Universal Soldier: Day of Reckoning’s DTS-HD Master Audio 5.1 track is the perfect accompaniment to such an intense movie. From the seeping, cleverly understated score to the precise effects coverage, the soundstage is used exceptionally well. Dialogue takes a distinct back-seat – not because of the action, but perhaps more because of the mood (think about Apocalypse Now, and just how much of the runtime was spent in the absence of words) – and yet the words spoken are clear and coherent throughout, right from that opening cry of ‘daddy’ which echoes throughout the surrounds.

Effects are wonderfully subdued by the score, which drifts in and out, sometimes sweeping up and taking over the stage; mostly just playing out with understated, oppressive tones behind-the-scenes. Yet the effects are also allowed to become a part of the crafted atmosphere, adding to the very setting of key sequences – from that odd heartbeat that you can sometimes perceive to the fizzling lights in the camp (you know, those same lights which mess with the presentation briefly); with power drills, shotgun blasts, pistols and assault-rifle fire, machete and axe hacks, and thunderous body blows making up the majority of the action sentiment – apart from that standout chase sequence.

The score is perhaps the most important part, although it simply can’t be separated from the rest of the track – the journey downriver directly referencing Apocalypse Now, as the motorboat engine slowly fades and the brooding score takes over. With just the right LFE input, this is a superb aural offering, demo quality and far better than you’d expect from this kind of low budget limited release feature.

It is worth noting that the film defaults to LPCM 2.0 so you should make sure you change the audio track first!

Unfortunately, whilst the UK (steelbook) release arguably boasts the ‘extra’ of having both the 3D and 2D versions – which is something of an exclusive – the US release, though it is 2D only, does have more in the way of actual supplemental material, coming equipped with both a decent Commentary from the Writer/Director and Dolph Lundgren, as well as a comprehensive Documentary too. Having checked these out, it is indeed a shame that we don’t get them this side of the pond, and I suspect ardent fans of the film may find themselves tempted to double-dip.

All we get here is a few Interviews with the Writer/Director John Hyams and with the three stars, Scott Adkins, Jean-Claude Van Damme and Dolph Lundgren, as well as the movie's Theatrical Trailer. Putting it in perspective, it’s clearly the superior release because it boasts the original 3D theatrical version (as well as the uncut NC-17 cuts of the film) but it’s just a shame we don’t get all the extras that are available. Beyond the gratuitous ultra-violence, this really is a low-budget near-masterpiece. With themes of identity and society; propaganda and Governmental programming, the Apocalypse Now-esque voyage through one tortured man’s psyche is remarkably effective as a mystery psychological thriller with distinct horror overtones. Sure, it may still fall within the Universal Soldier fold, strangely working as a natural progression from the underappreciated last chapter, Regeneration, but it is also something else altogether. Don’t be so quick to dismiss it, notwithstanding the relentless brutality, this easily ranks as one of the greatest films nobody is going to see.

On Region B-locked UK Blu-ray this Limited Edition Steelbook appears to be one of the only ways that fans across the globe can get access to the original native 3D version of the film. But beware, it’s only the Steelbook that includes the 3D version – the regular Blu-ray sports just the 2D alternative. It’s an impressive looking film, in 3D or 2D, with stunning video presentation and tremendous audio accompaniment. Sure, the extras don’t match up to the US release but, then again, they don’t get the 3D option, which really is a much greater loss.

This isn’t just for those who have an interest in the Universal Soldier films; this is a remarkably effective mystery thriller. Really, all you have to ask yourself is whether or not you’ve got the stomach for the violence, because it’s arguably the only thing keeping this baby back from being one of the greatest unknown gems of all time. Recommended!