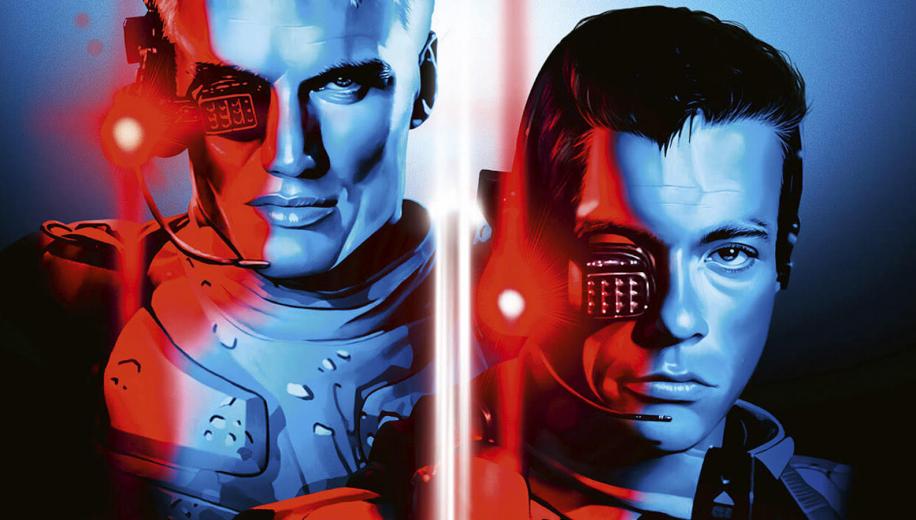 In the 80s and 90s, action icon team-ups were all the rage, with Snipes and Stallone in 1993's Demolition Man, and Van Damme and Lundgren tearing chunks off each other in 1992's Universal Soldier.

It's surprising how high concept the studios were prepared to go to get these double-team vehicles off the ground, with pre-Independence Day (and, indeed, pre-Stargate) director Roland Emmerich pairing up with his go-to writer Dean Devlin (they did both of the aforementioned movies, as well as Godzilla and, later, Resurgence, before Devlin struck out solo doing Geostorm) to work up a wild tale of two soldiers in Vietnam - Jean-Claude Van Damme's Luc Deveraux and Dolph Lundgren's Andrew Scott - who end up shooting each other to death when Scott goes crazy, torturing locals and killing his own. Cut to modern times, and a team of super-soldiers are unleashed on a hostage situation at a dam, amidst them the two Vietnam vets who, it turns out, have been kept frozen for the last few decades and thawed out to become part of an experimental program. When both soldiers start to remember their bloody past, however, Scott goes off the rails and tries to kill an innocent reporter, and Deveraux goes on the run to protect her.

That's a surprising amount of story to formulate, when - in plenty of lesser efforts - there would be less pretence attempting to string together a bunch of fight scenes between action icons. And with Emmerich on board, you know that the action is going to be good too, establishing a decent enough Van-Damme-in-'Nam opening and giving a quality strike-force moment for the opening UniSols mission, before everything turns into an elaborate chase movie, sparking up repeated conflicts between the duo before they meet for their final showdown.


Van Damme's first 'blockbuster', Universal Soldier was the perfect vehicle for him and Lundgren

Van Damme's first 'blockbuster', Universal Soldier was the perfect vehicle for him and Lundgren (even if there's no denying that Woo's Hard Target still comfortably has the edge), requiring Van Damme to be stoic and emotionless and kick ass with clean, proficient moves, worn down only by 'over-heating' (an element which was strangely 'borrowed' in Terminator: Dark Fate, ironically so considering Universal Soldier was, at the time, largely discarded as a Terminator 2 riff - not helped by the use of the T2 score over the original trailer). It was a role that would secure him the option to play opposite Stallone in Demolition Man; a villainous part he turned down at that point in his career. Lundgren, on the other hand, had no such qualms and was on fire, chewing up the scenery with aplomb, and absolutely relishing the opportunity to go wild. And a young Ally Walker, tasked with a limited role which must - on paper - have amounted to "babysit Van Damme's socially inept super-soldier and show off your legs", manages to do all that and still commit to a bolshy reporter depiction which would have made Lois Lane proud.

Emmerich would go on to do bigger and louder fare, whilst the Universal Soldier franchise would take a very odd path to mirror Van Damme's own career - with two DTV sequels made at a time when Van Damme was big enough to turn them down, then a terrible 'official' sequel which he did star in, as his last mainstream theatrical film, before two further recent sequels which are actually amidst the best DTV movies ever made, and reunited Van Damme and Lundgren - Universal Soldier: Regeneration and Universal Soldier: Day of Reckoning, the latter of which somehow successfully infused The Manchurian Candidate and Apocalypse Now into this B-movie franchise. Taken on its own, the original 1992 movie is a whole lot of cheesy 90s action fun, enjoying its hard-R violence and gore, its ridiculously super-sized armoured juggernaut centrepiece, and wisecracking script; and making the absolute most of having Van Damme and Lundgren together in one movie, often kicking seven shades out of one another just like you want them to. It may not be a 'good' movie, but, in its own way, it's a memorable and very entertaining 90s action 'classic'.


Universal Soldier makes its UK 4K Ultra HD Blu-ray debut courtesy of Studiocanal a day earlier than the Lionsgate/Studiocanal US release. It's another fabulous full-fat native 4K restoration from Studiocanal, doing a superb restoration job with the original 35mm print, remastered with Dolby Vision as the cherry on top.


Another fabulous full-fat native 4K restoration from Studiocanal, doing a superb restoration job with the original 35mm print, remastered with Dolby Vision as the cherry on top

Studiocanal continues its unpredictable selection of shot-on-film restorations for 4K, after a tremendous 2019 roster including The Deer Hunter 4K, Apocalypse Now 4K, Don't Look Now 4K, Angel Heart 4K, and even the Rambo Trilogy 4K, Cliffhanger 4K, Lock Up 4K and Red Heat 4K (with Leon 4K on the way). The results are stunning, and all the more impressive for universally wielding Dolby Vision too. Easily the best these films have ever looked, Universal Soldier's 4K presentation - continuing the run of somewhat surprising and unlikely 4K candidates amongst this selection, like Lock Up, Red Heat and arguably even Angel Heart - certainly isn't the exception to that rule.

Lovingly restored, there's a gorgeous amount of detail pulled from the image, evident right from the 'Nam opening, and particularly noticeable on the close-ups. Sure, it's a cleaner image, and the seeming lack of grain suggests a degree of digital manipulation, but thankfully the restoration work here doesn't rob all the underlying detail in its bid to clean up the image.

Of course, it's the WCG and HDR - here, Dolby Vision - that make all the difference at the end of the day, with dozens of stunning moments across the feature - a film which hitherto you may not have expected to provide anything approaching 'demo'. From the lush dark green jungle opening, beautifully peppered by gorgeous bursts of flame, and rich with inky blacks, all the way through to the desert chase sequence, which makes The Grand Canyon setting all the more stunning, transforming the barren landscape into a wondrous environment, with reds tweaked to make the orange sand rich and alive, and a gorgeous blue sky to cast it upon, this is a fabulous enhancement to the colour palette. And we're still back in the era of practical effects work here, so the explosions are all real, popping with savage fiery intensity and reminding you of just how good old film explosions can look. Excellent.

Although Studiocanal go that extra mile with Dolby Vision, it's sometimes a little disappointing that we don't get a Dolby Atmos remix, even if it is slightly more understandable given both the vintage and profile of the pieces. Universal Soldier was the last film to use the pre-DTS CDS Cinema Digital Sound system, which is often looked back upon as being a superior sound system. This all translates to a very good DTS-HD Master Audio 5.1 track, even if it's nowhere near reference material.

Dialogue gets keenly disseminated throughout, rising above the action to get clear and coherent prioritisation. The score was actually by a former member of Tangerine Dream, Christopher Franke, who turns in his first solo major motion picture work here, even if the end result is marginally unrefined in action. As a curious irony, the latest DTV Universal Soldier sequels had scores which were purposefully designed to be Tangerine Dream in style, and are considerably more memorable as a result. Nevertheless, the score gets keen priority too, providing a near-consistent backing element for the surrounds to lap up. Effects are where it's at, with thunderous explosions thrumming with LFE intensity, some nice Desert Eagle booms and heavy machine gun fire, as well as all those over-exaggerated body blows commensurate with this kind of 90s action fare. It may not be a demo track, but it does a fine job with the material.

Studiocanal also does another good job on the extras front (again commendably porting them over to the 4K Ultra HD disc itself), with an assortment of decent additions.

Headlined by a couple of Director-driven Audio Commentaries, one of which comes with contributions from stars Van Damme and Lundgren, there are also a trio of Featurettes and an interesting Alternate Ending which has Platoon-esque overtones and was likely changed in much the same way as the original end of First Blood.

It may not be a 'good' movie, but, in its own way, it's a memorable and very entertaining 90s action 'classic'
Universal Soldier's UK 4K Ultra HD Blu-ray disc affords us not only stunning native 4K video but also added Dolby Vision enhancement, and with great audio and a welcome selection of extras, it remains another great release from Studiocanal, giving fans, without a doubt, the best possible definitive edition of this 90s actioner, a Van Damme / Lundgren favourite they likely never expected to hit the format.