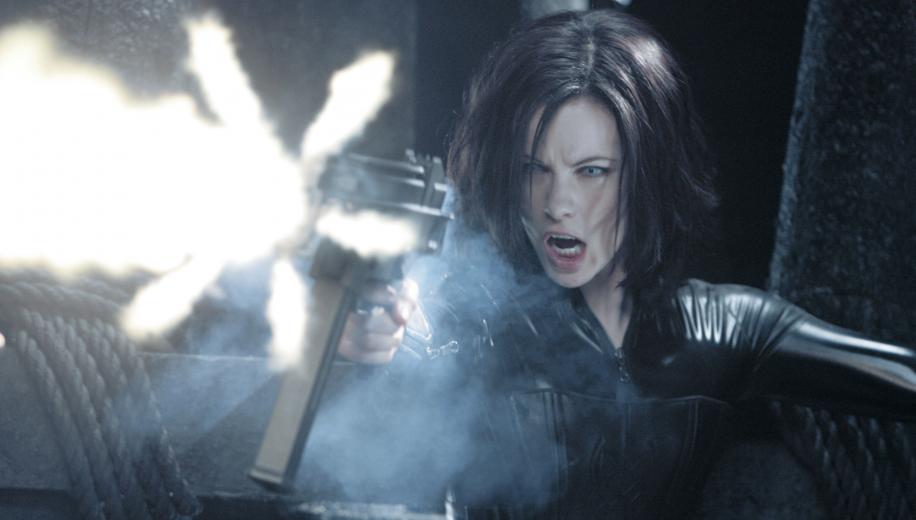 The disc has been given a theatrically correct 2.40:1 aspect picture that has been anamorphically enhanced for widescreen TV's. This is what I'm talking about; when a picture is done right, boy the DVD format looks hard to beat. First up those gorgeous colours look awesome, full, solid and bold, outstanding considering the distinctly average, average bitrate. But better than that the contrast and brightness are set to give totally absorbing blacks, blacks you can loose yourself in and be immensely satisfied. The film is dark, very dark, but not once do you think you are missing anything, such is the vibrancy of the black level. Detail is spot on, edges are held well into the distance with no harshness anywhere to be seen. Digitally I found no compression artefacts neither did I see any edge enhancement, I found no instances of print damage, not surprising considering the age of the film, nor was there any film grain of note; in all an absolutely pristine picture and one to show off just how good a DVD can look. They rarely look as good as this and when they do it's a real treat.

As good as the picture is the sound matches it perfectly. The disc has been given two Dolby Digital 5.1 tracks, English and French. Right from the off all the speakers get to work to fully immerse you in the world of the vampire. You want directionality? You got it, left, right, front, back it's all there in every scene, be it gunshots, wind, rain, thunder, or other ambient effects. The room is assaulted from all sides once the guns start firing; better keep the volume down a bit of you got neighbours as this is a fine loud track. Plenty of bass too holds a well ranged track together. Dialogue is clear with good tonal range and too given directionality when needed. Is that a helicopter flying overhead, or just one the screen, better check because such is the mix that sometimes you just can't tell. The score too gets its fair share of speaker action, though it never drowns out the action on screen. I was very impressed with this Dolby track; they can get it right when they really try as this one proves! It's not quite up there with the best of the best of the best, but I'd certainly consider this disc to show of my system!

A fairly decent array of extras accompany the main feature, all the featurettes, incidentally, whilst obviously all recorded at the same time are put together and directed by Wiseman himself, so there is a distinct narrative and they make for decent viewing. That aside the first extra is an audio commentary with Len Wiseman, production designer Patrick Tatopoulos, second-unit director and stunt coordinator Brad Martin and editor Nick De Toth. Wiseman takes a strong lead to the talk directing it as a chat, rather than a 'narration' as he puts it because he himself hates them. It is a fairly entertaining listen, with a very technical bent, 'that was digital, that was model' etc but it is easy going and there appears a genuine chemistry amongst the guys, especially Wiseman and Tatopoulos, that is infections.

Next up are the aforementioned featurettes, there are six in total, each covering a distinct section of the film making, they can be watch individually or all together with the play all function for an impressive seventy three minutes run time. The first of these Bloodlines: From Script to Screen which discusses Wiseman's approach to this second story with all the principle actors' impressions and interpretations of it. The next is The Hybrid Theory which concentrates on the extensive amount of effects work be they practical, computer-generated or a combination of the two. This was, for me, the most interesting feature because everything looks so good on screen, these guys really pull out all the stops to make the best darn look they can! Moving on to Making Monsters Roar which goes into the redesign of the werewolf suits (hurrah!) for better mobility and bigger feet, also goes in depth into teeth. The War Rages On focuses on the extensive stunt work with plenty of interviews with the stunt team and their new computer wire work, probably contains the most behind the scene footage this one. Building a Saga takes a look at production design and locations, fair amount of behind the scene material including original artwork of Wiseman and Tatopoulos as they achieve the unique look of the film. Finally Music and Mayhem covers how important sound and sound design up to and including music is to 'sell' a shot, for me the most boring.

Forgetting all the trailers the final extra for the disc is a music video for Her Portrait in Black by Atreyu, great if you like that sort of thing, no so much if you don't.

Underworld: Evolution is a terrific film. It builds on its predecessor in both story and development at a slight loss in maturity; in short it entertains, but more than that if forces that entertainment down your throat with a flair that cannot be ignored. As a DVD this product is hard to beat, with outstanding picture and sound and a comprehensive extras package this is the DVD format at its best, I feel no shame in recommending this to anyone.