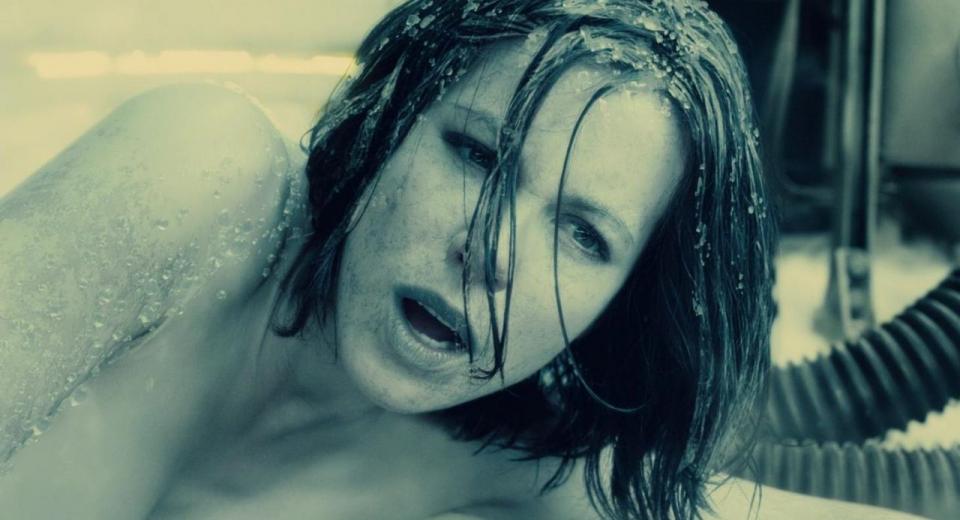 Well this is where the problem lies. Underworld: Awakening looks unquestionably reference quality on this 2D release; an excellent, near-perfect video presentation which should please any fans of the film. But, this is the 2D-only US release. It has an entire disc dedicated to the 2D presentation and, notwithstanding the addition PIP content in the extras, purportedly invests more of its storage capacity on the video. Both the US and UK 3D/2D combo packs attempt to use just one disc to provide both the 3D and 2D presentations and many fans have been concerned that this will have a negative impact on the video quality. At the moment, the only release available in the UK is the combo pack, so we don’t even get a choice.

As far as the 2D-only US release is concerned, the results are all positive. There’s simply next to nothing to criticise about this presentation. Stylistically falling in line with the previous Underworld instalments, Awakening boasts a blue-dominated palette, perhaps more blue than we’ve seen before, with a light tint invested in almost every scene, and Kate Beckinsale’s piercingly blue enhanced vampire eyes standing out above the rest. Detail is excellent throughout, with fine object detail showing up the clothing textures, the way light plays on Kate’s PVC outfit, reflections in the laboratory setting, and the light frosting of a person having been in sub-zero stasis. Longer shots appropriately set the scene, and the film definitely has a more urban, city-based and futuristic feel to the previous chapters. The colour scheme, as aforementioned, always takes blue into consideration, even if it’s just a light shading around the edges, but the rest of the colours are still well represented, with thick, deep, near-black blood reds, rich and strong black levels at the lower end and understandably pale and blood-drained skin tones. With that largely grain-less look that comes from digital-shot productions, this latest chapter looks smoothly and stylishly clinical on Blu-ray, professionally demo quality in every way.

Now, here’s where things get interesting. Upon a direct comparison with the UK 3D/2D disc I found that the image quality is almost identical in terms of detail and textures. But the black levels are completely different. Although I can’t take grabs with which to show you folks, let me assure you I’ve done cross tests on two players, a Panasonic multi-region standalone and a UK PS3. I’ve tested the pictures alongside one another both ways around and the results are exactly the same. There’s no easy way of putting this – the UK release is blue. Right from the opening Screen Gems logo, you can immediately tell the difference. Where the US release has a black background that is so black that it blends into the black bars at the top and bottom of the screen, the UK release is completely blue: you can easily make out the blue against the black bars that frame the top and bottom of the picture. Sure, it’s a dark blue, but it’s not even approaching black. Throughout the entire movie, you’ll be hard pushed to find anything which actually looks utterly black. Even Selene’s wonderful shiny black outfit is oftentimes a deep shade of dark blue. It's difficult to know why there are two different versions of the movie, and one can only assume that it's a side-effect of the 'lightening' done to make the 3D picture more effective, as it makes little sense for the filmmakers to have created two different 'looks' for the same movie.

At the end of the day, however, this is probably going to be more of a stylistic choice for fans. On the one hand, I can see precisely why some fans (and/or reviewers) were so taken aback by the UK version that they were up in arms over the ‘washed out’ look that the blacks have. On the other hand, the actual image retains a fair amount of detail, so much so that the images between the two releases look pretty identical in terms of detail and content. And really I can see why some would argue that it’s not washed out at all, it’s just... bluer. So, whilst I feel for those who can’t stand the almost complete lack of blacks in the movie, I think I also understand why others just assumed this was the intended stylistic look of the movie. After all, few people will have both versions with which to do a comparison. In fact, some people might prefer the whole film to look more blue, although I have to say, it looks pretty blue to start with, so I’m not sure you need it to look this blue! Personally, I think it’s more satisfying to have definitive blacks at the lower end. If you’ve got a preference then you know which disc you should pick up – UK 3D/2D = Blue; US 2D-only = Black. It’s as simple as that (unless you want a 3D disc, in which case you’re screwed and you’ll have to double-dip). For my money, I’d go US 2D all the way, but maybe that’s because I’m prejudiced over it – after all, it feels like somebody’s gone all ‘remastered’ French Connection over the 3D/2D disc, and it just doesn’t look quite right. There’s far less to debate over when it comes to the aural offering – the DTS-HD Master Audio 7.1 track is likely identical across both releases: and reference quality all the way. Keenly prioritised over the centre and fronts, we get clear and coherent dialogue throughout. The score, whilst not wholly memorable, offers up a regular supplement of material which the surround disseminate upon you. Effects range from the subtle crackle of sub-zero stasis chambers and the chambering of bullets and reloading of clips, through to more striking punches, like the Jurassic Park-like tremble of attackers encroaching upon the vampire coven, or the fierce attacks of the lycan beasts, not to mention the almost incessant thunder of a variety of firearms; bullets ricocheting around your living room as if you were right there in the maelstrom. It’s a potent but well-nuanced offering that provides a superior accompaniment to the main feature, resoundingly reference quality from start to finish and just a whisker away from being a perfect 10.

Although we don’t get a 3D version of the film, we do get a Picture-in-Picture track which is not available on the 3D release (they drop the Pre-Visualisation Featurettes exclusive to the 3D release, but some of that’s incorporated into the PiP option), rounding out this set of extra features as being a comprehensive offering.

Cracking the Underworld offers up a complete and comprehensive In-Movie-Experience which incorporates Interviews with the Cast and Crew; Behind the Scenes footage of the scenes being shot, the cast preparing, the makeup being done, and the stunts being filmed; and Effects comparisons. It should be your first port of call when investigating the extra features.

Filmmakers’ Commentary brings us a surprisingly good accompanying track by Producers Richard Wright and Gary Lucchesi, Directors Mans Marlind and Bjorn Stein, and Visual Effects Supervisor James McQuaide, who discuss returning to the story from the first two movies after over half a decade, getting the audience up to speed with the necessary introduction, the story development, the storyboard-to-screen work, the sets, the 3D techniques used, the visual effects, the scoring and the editing process. It’s a great multi-handed offering that fans will want to check out.

Selene Rises takes 12 minutes to look specifically at the return of Kate Beckinsale, her ease with the character, the changes that they have made to develop her over the last few years, and how she’s a big part of what makes the Underworld films so popular.

Casting the Future of Underworld further expands on this by spending 13 minutes looking at the new actors brought into the mix, and the promise that this has for the future of the saga, with a broader look at the overall series as a whole, and the overreaching story arcs.

Resuming the Action offers up 9 minutes looking specifically at the action sequences: the stunt work that was put into them, the 3D camerawork required to make them work, and the limitations of shooting in 3D, as detailed by the Second Unit Director.

Building a Better Lycan takes 10 minutes to look at the impact of the use of high quality HD cameras – namely the fact that the practical werewolf effects had to be much more realistic.

Awakening a Franchise, Building a Better World is a 19 minute piece which focuses mainly on the 3D side of things, looking at the cameras used, the 3D rig, the filmwork done and then how it was integrated with the 3D rendered effects in post. Out of all of the extra features, it’s one of the most technically-substantial; more informative than most.

The disc is rounded off by a Music Video for Heavy Prey by Lacey Sturn, featuring Geno Lenardo; a standard 3-minute Blooper Reel where the cast members mess-up on set, and a bunch of Previews. Underworld: Awakening is 89 minutes of above-average, entertaining, vampire vs. werewolf vs. human action/horror – pretty-much exactly what you would expect from an addition to the series; no more, no less. After Rise of the Lycans, I doubt many expected them to even bother returning to the story of Kate Beckinsale’s vampire protagonist Selene, but that’s exactly what they have done, and, even if the end result is little more than lightly entertaining, it at least sets things up for a more epic continuation to the series, as the likely fifth instalment will probably see a return to the grander-scale approach as per the first two movies.

On Region Free US Blu-ray we get excellent video and audio, and a superb extras package – this release appears to outdo the UK 3D/2D release in almost every respect, but for the fact that it obviously doesn’t have the 3D functionality. Although the differences between the video presentation across the releases might basically come down to just how much blue you want in your movie, fans who have no imminent intentions to go 3D should consider the US 2D-only release a superior package – it comes with an excellent Picture-in-Picture track and at least there are no doubts over the video quality, and no doubts over the black levels that you’re going to get.