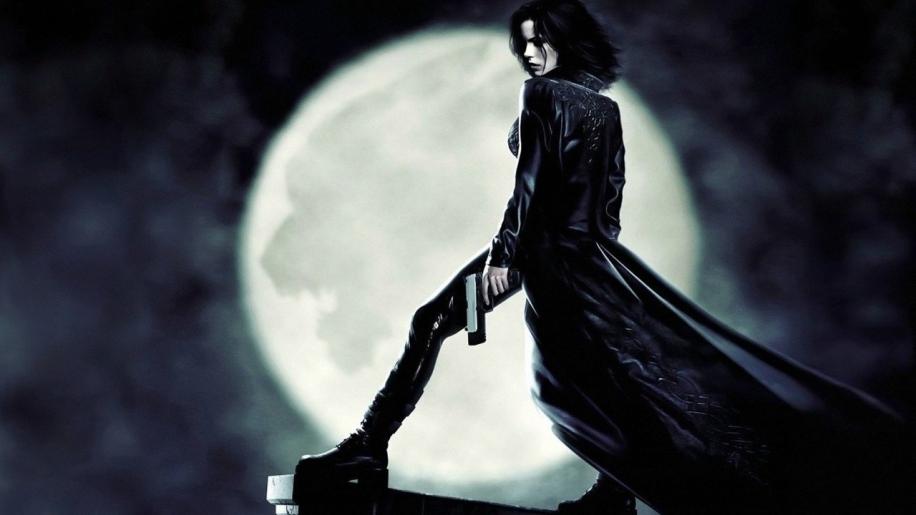 The entire movie is shot in an almost monochromatic pallet of blues and blacks along with a background of rain and lightening, all of which can often prove problematical for DVD, but not in this transfer. Framed at 2.35:1, anamorphically enhanced and with a peak bit rate well over 9mb/sec there are no obvious blocking or banding problems or signs of edge enhancement/ringing. Boasting of being mastered in high definition, the transfer is excellent with no colouring problems, dirt or evidence of print damage visible. Definitely a reference quality disc and one for the demo sequence list.

Filled with pumping thrash metal and techno music as well as various loud encounters between the Lycans and Vampires this soundtrack also has some excellent subtle moments. Atmospheric effects are detailed and enveloping with good use of howls, (one of which is taken directly from the original “An American Werewolf In London” movie), rain and other effects to draw you in to the movie. Do watch out for the volume level though which is a lot higher on the English DD 5.1 track than on the special features or the commentary track. It even be worth running your amp 10db lower than normal rather than risk damaging your amp or speakers

Whilst the main movie may disappoint the same can't be said of the extras with something for everyone on the two discs.

Disc one starts off with an entertaining commentary featuring the director Les Wiseman, Kate Beckinsale and Scott Speedman, who plays the pursued human Michael. The trio are obviously enjoying themselves on this track with plenty of banter regarding their experience of making Underworld, plenty of anecdotes and some interesting comments about the placement of thermal underwear and hot water bottles.

Next on disc one is a series of outtakes from the movie, mostly the normal fluffed lines and corpsing but with some good moments, including a slipping stunt director inadvertently performing on camera. Fang vs. Fiction, (groan), looks at the origins of the Vampire and Werewolf legends as well as interviewing people who claim they are, themselves, embodiments of the mythical creatures. Closing out disc one we have a couple of teasers and TV spots for Underworld and 4 movie trailers featuring Underworld, Hellboy, Resident Evil: Apocalypse and the much awaited Spider-Man 2.

Disc two is where the bulk of the extras reside and starts with “The Making Of Underworld”. Featuring the director and many of the cast members, this is mostly a self-congratulatory piece but it does, occasionally, look into the construction of the movie and the ideas behind it. “The Visual Effects Of Underworld” covers the, mostly non-practical, effects on the show and also reveals some of the not so obvious effects in the movie. Of particular interest in this featurette are the scenes involving Lucian's attack on and the subsequent escape from the submerged car, you'll never look at a green trampoline in the same way again.

“Creature Effects” covers the wonderful work that was put in to the construction of the movies practical effects, i.e. the werewolf and in Bill Nighys' case Vampire suits. One of the few points that stand out in this movie is the use of “men in suits” vs. CGI. Where CGI needed to be used it was but wherever possible the lovingly crafted suits where used giving a great feeling of realism that can be missing from modern, CGI heavy, movies. However, we digress. “Designing Underworld” and “The Look Of Underworld” both cover the construction of the film's uniquely gothic look with many examples of original sketches and the process by which they where transformed into the finished product. “Sights & Sounds” is a welcome break from the talking heads featurettes, taking us on set during the movies filming to hang out with the cast and crew.

“Storyboard Comparison” runs a rather nifty split screen comparison of the original storyboard against the finished scene along with the movies finished soundtrack. Since this doesn't resort to the, slightly overused in features, multi angle option this is one of the best examples of its type I have seen for a while. Rounding out the extras is a music video of “Worms Of The Earth” by Finch.

If only the film had been as good as it looked in the featurettes...Also worthy of note, though not on the discs themselves, are the two included booklets. The first is a graphic novel of the whole movie, which may be of use if you loose the thread of the plot at any point. The smaller booklet illustrates several examples of the original storyboard sketches with stills from the completed movie alongside.

A truly excellent package for a, regrettably, average movie. Beautifully conceived and played out in an original gothic landscape, Underworld sadly fails to live up to the hype and the work that the production crew put into it. My advice would be to rent and if you enjoy the movie for what it is, (a fairly reasonable popcorn sub-horror/action movie), then buy this set for the truly excellent transfer and above average extras.

Ahh, got through the whole review without mentioning Selenes' PVC suit once....Oh darn!