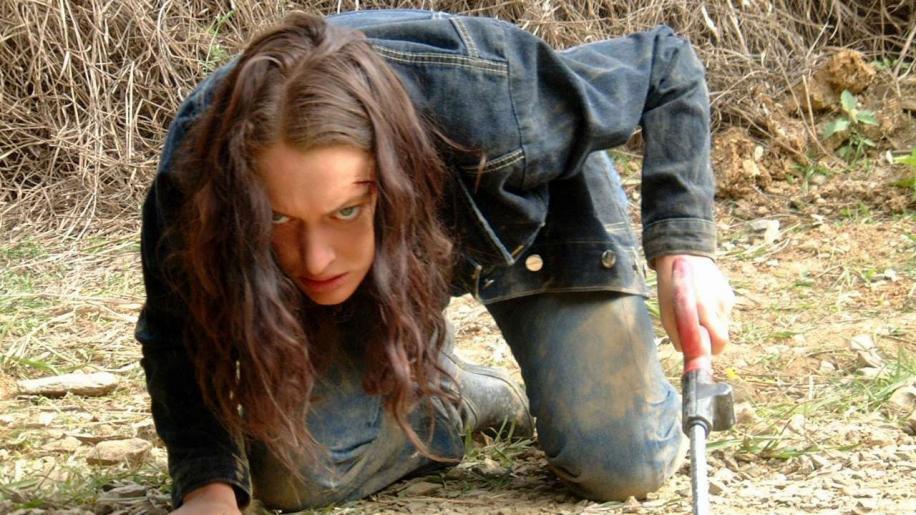 Maybe it's because the film is shot in 16mm, but the image quality was rather poor overall compared to your average blockbuster film to DVD transfers these days. The muted colours throughout the film notwithstanding, the effect of limited colour palette are used in most scenes (similar to what you saw in Gladiator or Traffic) there is also graininess in the image quality that does horrible work to your display's edge enhancements. This film is best suited to turning off any sort off sharpness or edge enhancements. I recommend setting your display to a softer tone to get rid of the grain. Right after the opening credits featuring B horror movie fonts over the opening scenes, it becomes apparent that the film isn't hurt by the relatively dark and grainy image quality it fits in with the sub-genre of indie, budget horror. The sound quality is really the saving grace of the DVD's presentation, it sounds excellent all the way through. The use of surround channels on the Dolby Digital 5.1 soundtrack is sparing but in a few scenes they rely on it to create directional effects that work well. After a lot of intimate and closed in scenes the soundtrack really packs an impact in the scene where a character lands in a crowds during a live rock performance, your speakers come alive with the sound of a live performance with crowds chanting and various activities all around. Gunshots throughout the movie are rock solid and don't seem to stay true to their relative sounds. Many films that make moderate use of gunfire use this monotone cannon sound effect for the sound every weapon that discharges. Thankfully here the guns actually sound plausible as high calibre pistols fired in closed areas are deafening and hit the sub nicely, while rifles fired outdoors are a little more tame and sometimes echo off your surrounds. The soundtrack is great overall, voices crisp and surround effects while not gaudy use the surround channels and sub aggressively when you'd expect them to in a zombie flick. Typical watered down “Making of” featurettes too often degenerate into celebrity stroke fests for my taste. But there are no stars here, perhaps this makes the extras on this DVD worth watching. A palpable energy emanates from the Spierig brothers when they discuss the making of this film. The featurettes are sure to be a delight to anyone who enjoys the film but even more so for aspiring film makers or anyone who is interested in learning what it takes to make a film on a modest budget. There is a short film school clip where the Spierig brothers answer questions of students that should give you some insight into their craft. The Behind the scenes section takes an in depth look at the nuts and bolts of making this film but it's also a story of an interesting journey by these two young film makers.

Supanova Convention QA: Essentially a film school QA session with the film makers and cast. It's funny at times and a great look at the actors out of makeup. You get a feel for the sense of humour the whole group must have had during filming and they even make a point of showing you how Dirk Hunter the guy who played the cop named Harrison is a real joker on the set. The brothers Spierig give good advice to anyone who might be an aspiring film maker and it includes clips of their numerous video efforts.

The Making of Undead: Takes an inside look at the drama associated with making this movie, the guys were constantly short staffed and short of money to put this picture together. We've heard many of these situations before but when you actually get to see clips taken during filming you get the sense that this is no exaggeration. It's interesting to hear some of the effects were done on a home PC that lacked the processing power to compile some of the digital graphic effects they were trying to do on screen. The long hours and sheer volume of work for everyone involved in the film gives you the feeling this was really a labour of love and it shows in the finished product. Few films making of featurettes make me want to re-watch the movie like this one.

Midnight Madness: Shows the opening of the film at the 2003 Toronto film festival at the Uptown Theater. It includes the tentative open speeches from the Spierig brothers and then audience reception after the film.

The Zombies is the distilled version of the Making of feature that appeared on the internet. Camera and Make Up Tests show a variety of takes of various wind swept and smoking zombies to show the camera what they'll look like in various lighting and costume effects. Homemade Dolly Construction another short feature that drives the point further home how home made this movie really is. Animatic to Film Comparisons is essentially digital storyboards juxtaposed by the films final result in another short feature. Also included are a bevy of trailers, extended and deleted scenes, artwork and design sketches and there's even a trailer for the upcoming Lion's Gate release Saw II that should be in theatres soon. This movie is likely to be an instant hit for fans of indie film or anyone who can take a well trodden horror genre that isn't afraid to make fun itself. But it's sure to get a few rentals from the video rental super-stores only because of the DVD's release shortly before Halloween. It's unlikely the average Blockbuster zombie will have any idea what they're in for and it'll be placed back into the case and returned after only the first few bloody decapitations with the cast all but winking into the camera. It's going to take a dark sense of humour enjoy this movie. But if you don't mind your zombies with a laugh then you're in for some imaginative film work, choreography and effects all lovingly crafted by visionaries in their field. It's quite likely you'll see more horror or even a serious drama with an imaginative twist from these two up and coming directors.