Adventure and enjoyment all mapped out 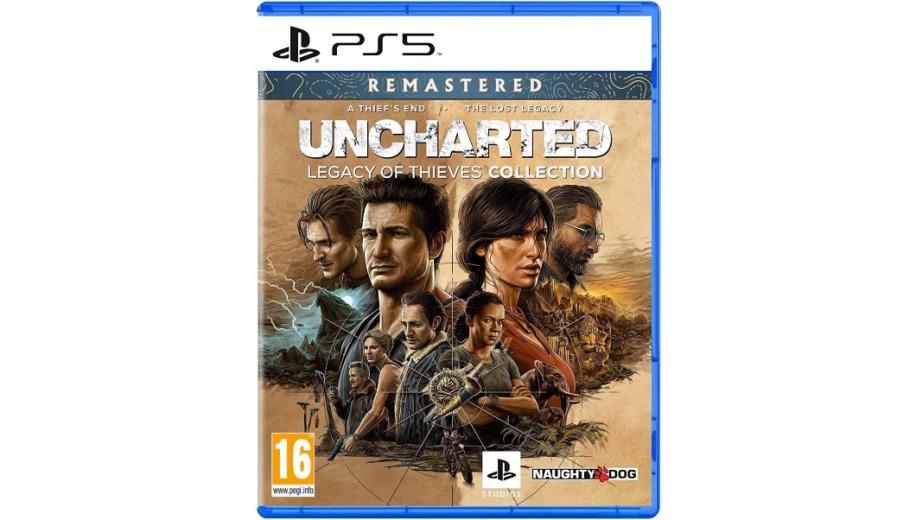 The Uncharted: Legacy of Thieves Collection remasters and repackages two of the best Sony exclusives for PS4 into a neat PS5 reissue. Enhanced versions of Uncharted 4: A Thief’s End and Uncharted: The Lost Legacy are included, with new graphics options for 4K, 60fps or 120fps gaming, while faster loading times are a true revelation. There are a couple of caveats in the lack of the original multiplayer mode and scant few extras, but you’ll never get to play the last couple of Uncharteds in a better format. They are also ideal for getting you in the mood for the movie hitting theatres now.

As with new video formats, re-releases of games have become commonplace. Every time a new console generation arrives – even mid-generation upgrades – publishers feel the need to tweak their original titles and repackage them for a fresh audience.

This can often result in amazing updates to age-old classics or, as in the case of the Uncharted: Legacy of Thieves Collection, a slightly enhanced box-set-of-sorts, with a few new features but generally the same games.

But while that can often leave a new purchase unnecessary, it’s not the case this time. Yes, there aren’t that many headline improvements over the PS4 originals of Uncharted 4: A Thief’s End and Uncharted: The Lost Legacy, but what you do get makes them both eminently more playable and a joy to revisit.

If nothing else, this is next-generation stuff that does make a big difference

It is also testament to developer Naughty Dog’s skillset that, even without major graphical tweaks, the six-year-old Uncharted 4 looks like a native PlayStation 5 game. It certainly holds its own amongst the best around right now. And, in gameplay terms, it was perfect back then and remains so now.

Add The Lost Legacy – a six-hour pseudo-sequel that focuses on a couple of side characters from the Uncharted series – and you get a decent amount of action-adventuring with some of the best storytelling in the business.

Newcomers will certainly revel in the quest to find the pirate treasure of Henry Avery first time around. Uncharted 4 introduces Nathan Drake’s brother, Sam, to the mix, which creates a new dynamic for the series. Having him accompany you for most of the game adds constant chat, banter and new puzzling elements throughout.

Naughty Dog also borrows stealth play from its other blockbuster series, The Last of Us, to expand the experience. And, thanks to some open-plan maps in both games in this collection, you even get to drive around in jeeps and explore much more than in previous Drake adventures.

Even having completed both games on PS4 in the past, we loved making our way through each again. In fact, there were some sequences we enjoyed more second time around, spending more time on taking in our surroundings and the extraordinary vistas of Madagascar and India respectively.

... haptic feedback and use of the adaptive triggers, [...] are subtle and, we found, largely irrelevant

In terms of extras, the PS5 versions do gain DualSense controller benefits, such as haptic feedback and use of the adaptive triggers, but they are subtle and, we found, largely irrelevant. There is also support for 3D Audio now.

However, the headline enhancements are full use of SSD storage which makes loading times almost non-existent and improved frame rates. We’ll come to the latter in a bit, but it cannot be overestimated how much better an experience you get from the loading speeds.

All of the original Uncharted games could be painfully slow to load on the previous generation. Now, even with big, open-world maps, you barely even notice. If nothing else, this is next-generation stuff that does make a big difference.

Owners of the existing games also get the benefit of bringing over their save games from PS4. And, there’s a cheap-as-chips upgrade path offered by Sony to boot (on its digital store).

Sadly though, what one hand giveth then other taketh away and, while these are the best examples of Uncharted 4 and The Lost Legacy out there, the multiplayer mode that came with the original is absent. It wasn’t great back then, to be honest, so won’t be missed by many but it’s still worth pointing out.

The other big enhancement that is present is a dramatic improvement in frame rates.

There are three graphics modes to choose from in both games: performance, performance+ and fidelity.

Performance presents the game in 1440p but with a 60 frames-per-second refresh rate. This is our preferred option as it combines crisp, detailed graphics with a stable, smooth frame rate. Performance+ ups the ante a little for those with a 120Hz-enabled display.

There’s a sacrifice to get the 120fps though, with the resolution dropping to 1080p. It creates a softness to the image that we’re not that fond of, while the increased frame rate between 60 and 120Hz is not perceptible enough to justify it. This isn’t a fast-paced first-person shooter after all.

The last mode, fidelity, gives you a full native 4K resolution – something that’s new to the games as they were presented in a maximum of 1440p, even on PS4 Pro. However, the frame rate drops to the original 30fps here and, we must say, that just looks stuttery and uncomfortable when you’ve experienced the other alternatives.

HDR is present too and works well. There were complaints about the HDR performance with the originals, with some preferring to turn it off, but those concerns seem unfounded this time around.

Graphically, both Uncharted 4 and The Lost Legacy are spectacular in every other way. Almost art-like in style and tone.

As is the norm with Naughty Dog games, the audio throughout is cinematic and epic. A couple of superb scores are underpinned by excellent effects work, especially during the bigger on-rails action scenes.

... if you have it set for an AV amplifier, you get the full surround experience

You can tweak the levels of any of the individual elements, plus set the dynamic range to suit your setup. The game also syncs with whatever audio settings you chose in the PS5 menu, so if you have it set for an AV amplifier, you get the full surround experience.

The addition of 3D Audio is new, as previously suggested, so you can also get a decent virtual surround experience from suitable headphones.

There is little doubt that, in the Uncharted: Legacy of Thieves Collection, you are getting two superb games – albeit one a bit truncated and seeming more an expansion to Uncharted 4 than a true sequel. But, if you’ve played both already is there enough here to attract you back.

... in gameplay terms, it was perfect back then and remains so now

We’d argue, yes, that more could have been done in the remastering process, with a few added extras and/or Easter eggs thrown in for good measure, but in all honesty both games stand head-and-shoulders over many others released in the interim anyway. And fiddling for the sake of it can be a mistake at times.

Plus, with Sony’s digital upgrade path giving you this collection for peanuts if you already own either of the games on PS4, we expect you’ll find your revisit as enjoyable as our own.

As for newcomers, it’s a no-brainer. What are you still reading this for? Go get it.