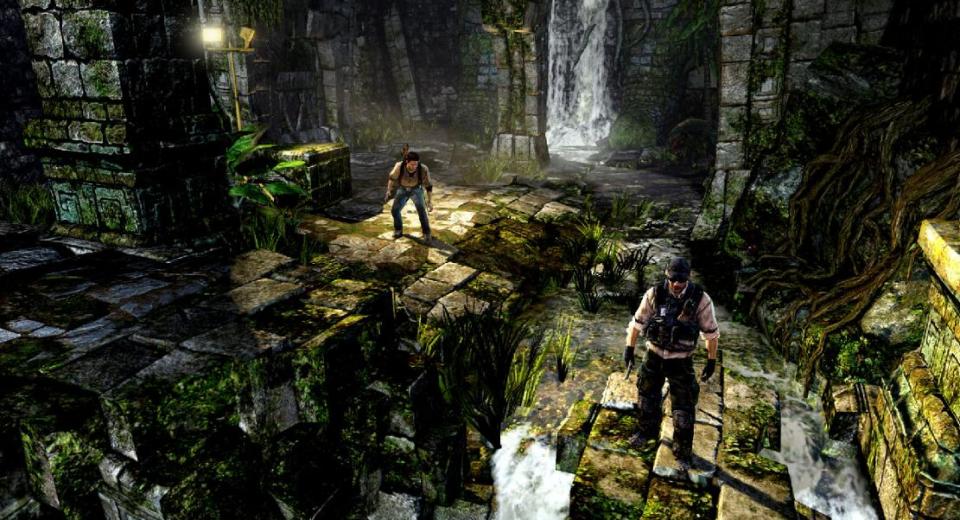 Every new console needs a standout title, if not an outright system seller, at least a launch period game that grabs the eye, showing off the surplus horsepower found in the fresh hardware, thus luring in the graphics junkies. The best case scenario is the continuation of an established series, the exclusivity of which will draw franchise aficionados into making the upgrade. Step forward Uncharted: Golden Abyss on the PlayStation Vita.

The fourth in the hugely successful Uncharted series, exclusive to Sony, Golden Abyss is the first not to be developed by Naughty Dog, though they did “oversee” its making at the hands of Sony's Bend Studio. With three entries having polished the gameplay in increments and established a solid formula, there was little chance Bend would go wrong surely? Well, whilst the third person action-adventure has got an almost foolproof blueprint to follow, the leap to new console can bring with it some teething issues, and the question remains, just how much of Vita's new gadgetry do Sony expect to be crammed into an Uncharted shaped package?
The story is going to come as no surprise to those who've enjoyed the previous titles. In short, our protagonist, whom you control, Nathan Drake is once again cursing his allegiances and hunting for treasure. The standard flashback is used to tell the story of how Drake came to be where he is in the prologue, and there are no prizes for originality in this regard. It's all bounding through undergrowth, stumbling over bones, archaeological mysteries and nefarious baddies keen to pinch the spoils. If you thought the series hadn't evolved enough away from its Tomb Raider-like roots, then there's little here to cushion your established criticisms. If, however, you are one of the millions who massively enjoyed the Indiana Jones act, complete with smart scripting and cinematic action then you'll be pleased to hear the move to a portable hasn't held it back. The first thing you'll note, the game looks slick. It's perhaps not quite the PlayStation 3 in your hands dream, but it's a marvel that so much graphics gloss is found in a cart the size of a thumbnail. It's even got a bit of the CSI Miami-esque lens flare that it's series siblings occasionally went for; the lighting is certainly adept, and the switch between bright light and shadows feels dynamic, never blinding or having you straining to peer into the frame. The textures are detailed enough to make you nose about with the camera (more on which later) and actually want to spend time poking about in the different locations, looking behind rocks and disturbing the heavy foliage. Some of the surfaces in the larger areas won't stand up to the PS3 releases, but the character animation - which you'll spend most of your time staring at given this is a 3rd person perspective game - is top notch.

In terms of environment, the scale of the series has always been a bit deceptive, filling what at first appear to be large areas with a succession of smaller, bite-sized sandpits within which to have fun. There are some instances of this on the Vita that definitely have the whiff of constriction, forcing your path in an obvious manner, but these only become apparent if you're a real dawdler, and the action is at such a pace that you really shouldn't have time to nit-pick. Eyes front and keep moving, there's treasure to find and people to shoot.
Once you've gotten over the sheer beauty of what's presented to you, and the technical marvel of putting it all in the palms of your hands, the early section can be a bit of a let-down. This is largely due to the inevitable tutorial that seeks to shoehorn in just about every ace up Vita's gadget laden sleeves. The touch screen is at the forefront of this mission, and it feels like an unwarranted attempt to convert you rather than an innovative use of technology. When you first try out all the little bells and whistles Bend have attempted to integrate it becomes almost infuriatingly intrusive to someone eager to just get on with all the actions they've learned over the past five years. Climbing now allows you to draw a path with your finger along the edges you want Nathan to make his vertical trail. It works, but only in part. When you are in awe of a breathtaking cliff face, resplendent in trailing vines and hidden monuments, the last thing you really need is a podgy finger obscuring the view. When time is of the essence though, or there's a long series of ledges to traverse, the ability to set out a route in advance of Drakes movements makes those constant moments of impatiently tapping the leap button a thing of the past. The good news is that you are not forced to do anything, Bend have not wholly tailored this game to the Vita but instead given you the option to use the new controls. Some you may favour in certain scenarios, as with the aforementioned climbing example, whilst others you will almost certainly dismiss immediately.

The rear touch pad was my Achilles heel, I don't consider myself to have dinner plate mitts, but the need to keep your fingers off the pad (there's no option to turn it off) proved troubling, as it is somewhat hamfistedly used to climb ropes and turn objects. The game uncomfortably straddles the expectations of pushing new tech and also continuing a polished gameplay formula at the same time. There's no reason, when you have a thumbstick, to force players to use the touch screen, but for every misstep there is a good example of tentative gaming evolution.
There's an in game camera used to grab snaps (which ties in to solving additional in-game mysteries), which uses the Vita's motion sensor, so when you move the console left and right, up and down, the viewfinder shifts in game to show the corresponding landscape in a vaguely augmented reality manner. As you explore, you'll come across thickets of bamboo and vines, which can only be cut through via a touch selection of the machete icon, whereupon you'll need to replicate the on-screen arrows with a finger swipe. Nathan duly carves his way through and you can pick up whatever bounty lies beyond in the hidden area. Find an engraving and you can get a charcoal rubbing via an obvious use of the touch screen. These aren't ground breaking, in fact they could be seen as gimmicks, but they are woven into the search for artefacts and the uncovering of mysteries littered throughout the game. In terms of combat, things are tweaked, with quick-time-events brought in for hand-to-hand, which feels shoe-horned. The final Vita trick up Golden Abyss' sleeve is reserved for shooting. Now you may want to adjust the sensitivity of the Right thumbstick for aiming as it can't replicate the PS3's larger, more spongy and forgiving feel, but the nifty handheld's gyro comes into play again, as you can move your reticule by subtle movement. When you whizz into an over-the-shoulder view, if you're near a baddie but not quite on the mark, it proves a cinch to give the Vita a little nudge one way or another to pinpoint your shot. It is optional, so purists may snort, but once you've picked off a dozen or so bad guys you'll be fairly proficient.

So, if that's the Vita-heavy focus of the game out of the way, what's the core experience like? Well, such as it was, namely excellent. There's sadly no multi-player, however Uncharted always put most of its eggs in the single-player basket anyway, and collectibles are thrown in to keep you coming back a few more times. The flow of the game is like its siblings, alternating fast and hectic with steady and ponderous. It is unashamedly cinematic in feel (though it falls short at times), happy to play the Indiana Jones card ad infinitum, full of sassy scripting and clichéd characters, but oh so hard to dislike for it. It isn't quite as proficient at the set-pieces as its predecessors, but the scale for a handheld feels about right. There really is very little to critique, such is the unshakeable nature of the established formula, beyond the new Vita-specific features. If you're after another slice of exploration, puzzle solving and fluid combat Uncharted: Golden Abyss is a must-buy.

As good as gold

A deviation in terms of platform brings with it the teething troubles of utilising new technology. There are a few issues with the Vita-specific control features, but the core gameplay remains largely untouched; gorgeous ruins to explore, mysteries to uncover and nefarious treasure hunters to shoot. The story and character interplay lacks a bit of the warmth of its predecessors, but the scripting is suitably tight, relying on just enough well worn clichés to survive and the quality of the voice acting makes even the most predictable characterisations instantly forgiveable. It's another slick entry in the Uncharted series; it doesn't look out of place alongside any of the PS3 offerings, which is probably the greatest compliment you could pay it. A perfect title to show off some shiny new hardware and a decent adventure to boot.