Nintendo hand us a remix tape of the 80s. 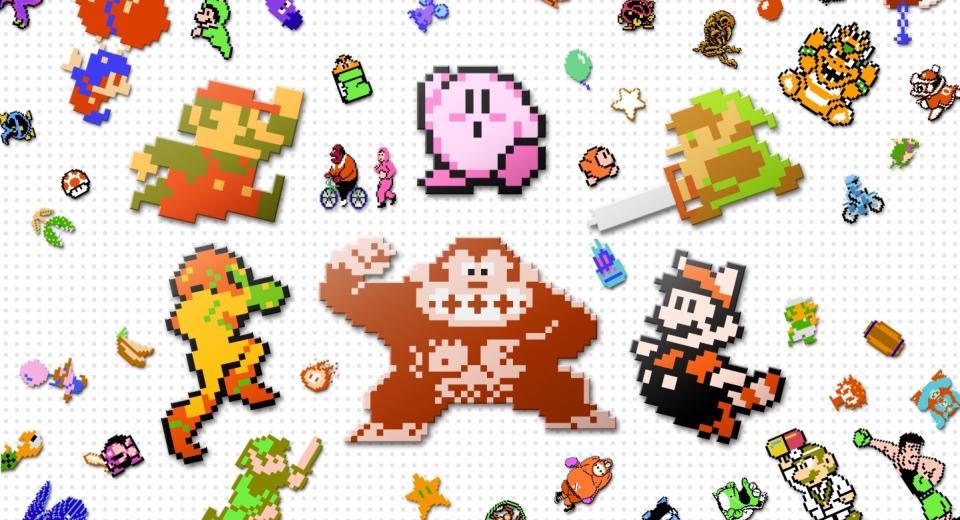 Everyone starts somewhere. Be it Samus when we all thought she was a he, the Mario Bros. before they were super, or indeed Link’s early insistence that it was perfectly sensible to go alone and no, old man, I’m not taking anything from a stranger. What’s worrying, however, is just how many people actually remember those instances?

Though the NES may have sold a metric shedload at the height of its 8-bit prominence, those of us who were actually around at that time are probably very much in the minority nowadays. Many of those characters are now simply part of the fabric of the hobby, seemingly having existed forever, yet barring creaking hardware or emulation, it has been hard to truly appreciate their origins. Though even then the brutal nature of games didn’t exactly make them a welcome experience for many.

Step forward Ultimate NES Remix, a veritable package of nostalgia. Crammed within its tiny cartridge are sixteen games from Nintendo’s debut machine including Metroid, a variety of Super Mario Bros., and the first two Legend of Zeldas. Wonderfully it’s not just the superstars that get a chance to shine either; the likes of Kirby, Excitebike, Punch Out, Donkey Kong Jr, Kid Icarus, and Balloon Fight are all found in the mix too, giving a chance for people to play games that they feasibly either missed out on or have never ever seen. Ultimate NES Remix does a wonderful job of celebrating every classic title. Through a series of bite-sized challenges you explore their more choice moments, hand-picked by Nintendo to show off unique mechanics and encounters. Appearing mid-level and diving straight into the action, each is no more than a couple of minutes long – with a few lasting only a matter of seconds - but all offer an insight into the most popular games of the time. It’s like the ultimate Game Genie, allowing you to warp straight to the cool bits.

The de-facto choice for many, Super Mario Bros., is a great example of this as across its 23 separate challenges it firstly introduces the basic controls, before building on them and revealing the intricacies of the game. Early stages are there to explain aspects like running, jumping, and coins, which may be second nature to players of a certain esteemed age but Nintendo have been canny at effectively retrofitting tutorials into an era where hand-holding simply didn’t exist.

It builds, too, showing off secrets such as the hidden vines, warp pipes, and the particularly tricky art of ricocheting a Koopa’s shell against a nearby wall, landing on it again and again in quick succession, racking up 1-ups. And that’s where the magic lies, in capturing those moments that took an age to setup or to reach and allowing you to replay the highlights of your favourite games.

The same is true across the board, drawing you into Punch Out, selling you the wonders of Kirby, and showing you the potentially never seen before delights of Balloon Fight. This is a buffet for you to pick from. Sampling morsels here and there before gorging yourself on everything a particular favourite has to offer. The further down the chain of challenges you go, the more you will be tested. Boss fights are a common theme but the clever bods at Nintendo have done more than merely warp you to a series of checkpoints. In many cases they have reached deep inside the emulated game and are paying far more attention than to just where you are and who you’ve killed. Whole stages are based around avoiding damage, speedily picking up collectibles, or turning player abilities on and off. Imagine playing Kirby without his ability to inhale enemies or tackling Excitebike with the turbo permanently jammed on. These little tweaks help elevate Ultimate NES Remix from being yet another Nintendo rehash of its old ROMs and allow them to have some fun.

It’s this approach that forms the basis for the 50 remix stages. In them, nothing is sacred, as games you once thought you knew like the back of your hand are given a severe shake-up. Expect to find Boo and his ghostly chums invading Dreamland, pressuring Kirby to defeat Whispy Woods quickly; the confused Link scaling Donkey Kong’s girder tower despite his inability to jump; and Mario leaping his way through a level that has turned invisible, unsure of where his next step is. Each challenge is there to play on your preconceptions, forcing you to completely re-evaluate what you knew about a title.

The remixes which prove most successful opt for subtlety, which given most people’s familiarity with the levels on show is far more powerful than many of the dramatic, sweeping changes. My personal favourite is a take on Mario 1-1 where after a second or so the whole game - bar the blue sky in the background - turns black, forcing muscle memory to take over, with only the shadow of a leaping plumber to guide you on your way. Others swap sprites or restrict your view but never alter the original to the point of being unrecognisable.

To talk about them all here would spoil a great deal of the charm, as half the fun is leaping into a freshly unlocked remix and coming to terms with what has altered. There is plenty of variety on display, though one disappointment is that rather predictably it relies heavily on the Super Mario Bros. series. Whilst that shouldn’t be surprising given the mascot’s importance, it would have been nice to have a more even share given the wealth of content that Link, Kirby, and the rest, brought to the NES during the 80s. Despite all the good that Ultimate NES Remix exudes, I found it left me always wanting more. It’s almost too good at what it does, handing me a delightful, bite-sized taste of the past but offering me no way to satiate the ensuing appetite. The challenges fare well enough for short bursts but the lack of actual meat on the bones proves frustrating. Given their thriving Virtual Console business it’s understandable why none of the full games were included but on more than one occasion I shut my 3DS, headed to my games room, and turned on my original NES (then turned it off, turned it on, turned it off, blew in the cartridge, turned it on) just so I could play more than one stilted round of Donkey Kong Jr. at a time.

Though it may not have the complete games included, where it does try to hook you is through high scores. Most challenges have online leader-boards attached to them, allowing you to see just how your Mario speed skills compare to those of players from across the globe. Sadly, however, their integration is rather poor. As opposed to taking a page from so many wonderful XBLA and PSN titles and having a rival’s score prominently displayed to goad you into just one more try, the leaderboards are hidden away. It may be only a button press away but the lack of seamless integration with the challenge system hampers any sense of rivalry from developing.

It’s part of a wider problem whereby the actual package has a rather thin appeal to it. Whilst the games themselves may be able to stand up strongly in their own right thanks to their brands, Ultimate NES Remix itself is rather characterless and lacking theme or function beyond simply kicking off the challenges. Given the love and attention that the developers have lavished upon the unique remix stages it’s a shame to see it housed in quite a basic shell. Ultimate NES Remix does a superb job at selling you the wonders locked away in cartridges of the 80s. It offers dozens and dozens of tiny challenges for you to feast upon, providing experiences that very few have the willingness to play through these days. It smartly weaves in subtle tutorials before unleashing a highlight reel that takes in the best levels, the trickiest bosses, and the game’s stand-out encounters.

Whilst there is a vast amount of content, the structure tying it all together is a little thin, meaning that most will only be able to play for short stints before looking for something more substantial. Unlike Wario Ware there is no cohesive presentation to pull you through, nostalgia is your only source of momentum as you seek to unlock yet more challenges.

The strength of the content however is found within the original titles. Playing through Mario 1-1, exploring Hyrule for the first time, and your initial foray as the Morph Ball, all give you a glimpse as to where your favourite series started, and show that Nintendo has repackaged some classics in a very clever fashion.