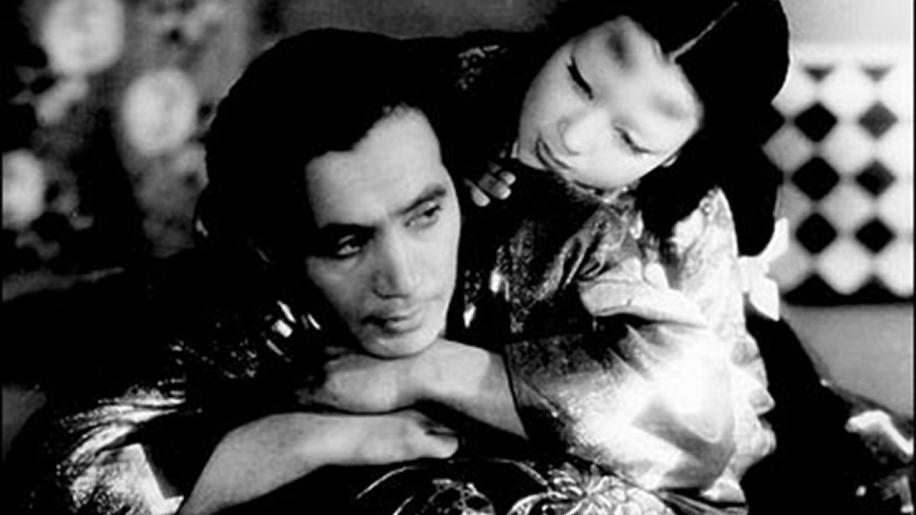 Presented in 2-channel mono, neither film's audio transfer is going to win any award. Again, allowances for the vintage of the material must be made, but, to be honest, I found them pretty poor. Whilst popping, distortion and drop-out aren't problems, the relative lack of integrity, detail and clarity make for abnormally quiet listening experiences that will need volume boosting to reach a comfortable level. The various effects - musical and atmospheric - are considerably downplayed within the design and things such as the distant gun and canon-fire in Ugetsu are mostly lost in the transfer. We see characters reacting to them, but we can barely hear it at all. The musical scores only faintly come alive, which is a shame as, particularly in the case of Ugetsu, the score can often be very mysterious and bewitching. General hubbub and crowd activity is also mightily restrained.

There really isn't much more that I can say. The tracks for both films feel muted and bereft of energy or depth. American movies of the era tend to have barky, shrill but lively audio when heard on today's disc transfers and I wish that something similar could have been achieved here. Granted these sound designs are lot softer and decidedly more lyrical than their US counterparts, but the mixes here sound too squashed and introverted to properly stimulate. However, I doubt that anyone will struggle too much to enjoy what design is on offer. Well, I can't help thinking that these films would have benefited from full commentary tracks, but the inclusion in Eureka's deluxe package of the comprehensive 64-page book of notes, essays and original writings makes up a lot of historical and contextual ground for both productions, though especially Ugetsu Monogatari. We are even treated to the original story upon which its central plot element is based, The Reed-Choked House by Ueda Akinari. The book also contains stills from the movies that, irritatingly, look much better than the restored versions that appear on disc, showing how clear the images once were.

Both discs also contain brief talking-head featurettes from Eureka regular-face and Asian Cinema expert Tony Rayns. Shot in black-and-white and filmed statically up close and personal with Rayns, these small background pieces serve as introductions the films in question. Oddly, they are interrupted by title cards to tell us which new aspect is to be discussed - and these relate to the small, unadvertised chapters that comprise the featurettes. Considering that the one for Ugetsu Monogatari is only eight minutes long and the one for Oyu-Sama is twelve minutes long, this seems slightly extravagant. However, both featurettes are good value and even if Rayns struggles with the odd Japanese name, he delivers an informed and interesting account for the films, the original stories they were adapted from, their director, cast and crew and the times in which they were made.

Ugetsu Monogatari also has the original Japanese and US theatrical trailers. There may not be much in the way of extras for either film, although praise must go to Tony Rayns for his obvious enthusiasm for the genre and the style of Japanese Cinema, but the extensive book that accompanies them more than does them justice. Possibly an acquired taste and certainly not to everyone's liking, these films, nevertheless, represent part of what was a huge cultural transition for movies the world over and, as such, are important benchmarks. Hailed as masterpieces now, these may not have won favour with their own director who seemed a trifle bitter that he was not getting the respect he believed he deserved (at the time, anyway), but they still depict an intelligent and intuitive filmmaker who crafted scenes with cinematic mastery and told stories in a uniquely individual and influential style

Eureka's British debut discs are naturally mired by damage and the passing of the years, but this shouldn't put potential purchasers off in any way. As I said in the review, allowances must be made and the high-end viewing platforms we have today may be slightly less-forgiving in this respect, ironically making them look a little worse. Both Ugetsu Monogatari and Oyu-Sama are deftly told dramas from different ends of the narrative spectrum, yet both meet when it comes to tradition, destiny and fate. And both captivate in their own peculiar manner. Recommended. Both films have been restored and taken from high definition masters from Kadokawa Pictures and their first appearances on UK disc are in the theatrically accurate 1.37:1 aspect, that leaves black borders down the sides of the image. With the pair hailing from the early 1950's print damage is only to be expected and, whilst it is not so bad as to hamper your enjoyment of the films, it still remains continual and totally apparent throughout. What follows sounds pretty bad - but in this age of totally pristine 1080p pictures and glorious viewing platforms, it is easy to forget how primitive a bare-bones piece of much older celluloid can appear, so allowances for the passage of time must be made.

Both films feature wavering contrast that robs vitality from them quite considerably. Night-time scenes and those of subdued lighting can look soft and wan, without clear distinction between light and shadow. Blacks are not good and seem ill-defined and weak. Detail is poor across the board, although Ugetsu fares much better than Oyu-Sama and is actually quite rewarding when it comes to depth of field. Many external shots feature bustling villages, varied landscapes and homesteads, and cinematographer Miyagawa Kazuo's fabulous compositions yield great sense of distance, placement and texture. Scenes such as the refugees fleeing the village and heading into the hills, or the main characters shoving off from the reed-banks and out into the lake whilst the expanse of water separates them from other stragglers making a crossing further into the distance - or the top of the screen as far as we are concerned - look very complex and striking. Oyu-Sama, an earlier film, doesn't really anything to match this, being a lot more sedately composed and with much softer backgrounds and less detail with which to provide a sense of depth.

Both transfers also exhibited some edge enhancement and some slight ghosting. Ironically, Oyu-Sama is the worst for the ghosting - when it is Ugetsu that actually features ghosts! In both cases, though, this is only occasional and shouldn't really interfere with viewing pleasure. Oyu-Sama is distinctly softer overall than its companion-piece and, to me, looked as dry, faded and worn as old parchment. A lot of much older Universal and RKO titles appear much more stable, clean and vibrant, so this was something of a disappointment. Both films have pretty shaky scene transitions and numerous wobbles and lurches. Oyu-Sama also contained a few noticeable frame-jumps and some occasional white-out flashes and flares dotted around the image, whereas Ugetsu appeared more stable overall and less prone to such unpredictable filmic guests. But both suffer from innumerable nicks and flecks. In fact, there are times when it looks as though there is a terrible drizzle taking place, with lots of vertical thin line darts flickering down the picture, but this is, sadly, just the passage of time upon the film.

But don't let any of this put you off the movies themselves. I settled into them very quickly and easily and soon managed to dismiss the damage.