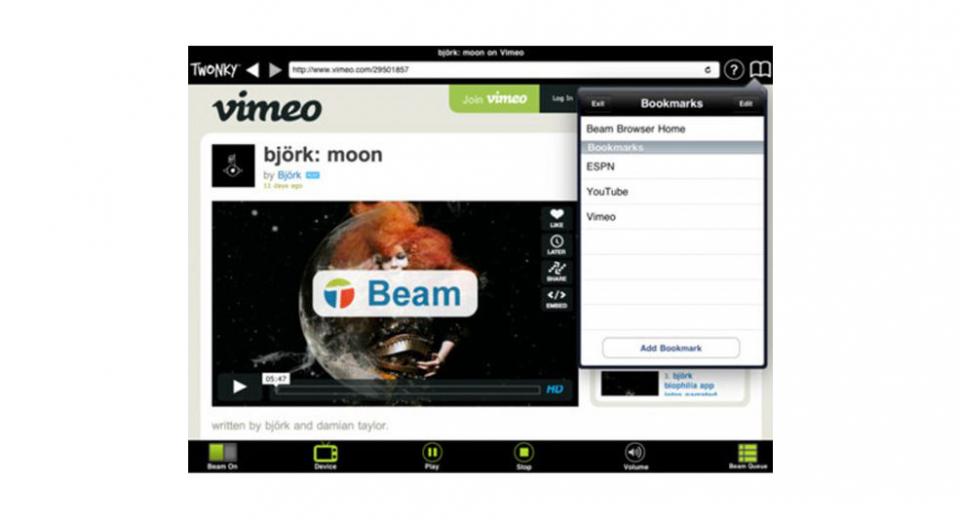 We get to review quite a range of products here at AVForums, one day it's an £18,000 projector, the next it's a £100 Blu-ray player. However the Twonky Beam is an app, which is a first for us and better than that, it's free! Twonky take their name from a little know 50s B-movie called The Twonky, which is about a man whose life becomes dominated by his TV - we know the feeling. Anyone interested in catching this forgotten masterpiece can find it on YouTube, just don't expect production values, good acting or a coherent plot. The modern day Twonky isn't trying to dominate your life but it is trying to make it a little easier thanks to some very inventive software. The idea behind Twonky's suite of products is to offer computer and mobile applications, as well as an enhanced media website, to help you easily enjoy personal and online music, photos and videos. You can use Twonky products to share your favourite media with PCs, TVs, stereos and other devices connected to your network and Twonky products work with Windows, Mac, Linux, Mobile and the Web.

Twonky Beam is an enhanced browser that is available for both Android and iOS and provides a simple and familiar way to discover and enjoy internet videos on your tablet or smartphone and then stream or 'beam' them to your Smart TV, Apple TV or other media players on your home network. When you visit a website, Twonky Beam displays a Twonky Beam button over the media files that you are able stream to another device. The home page contains links to popular websites and you can easily return to this page by tapping the Twonky logo in the app. Twonky Beam is primarily aimed at internet video, but it also works with audio and photos. You can create playlists of media items from across the web, continue browsing while playing media on a device and bookmark your favourite sites for future streaming. It all sounds very interesting, so let's take a look and see how it works in practice. The Twonky Beam app appears as an icon on your tablet or smartphone and when you select the icon it opens your standard internet browser but with the app itself positioned to the right hand edge of the browser window. When you select a video to stream the Twonky Beam window opens on the right hand side offering you a choice of play, stop, preview and volume. There is also a list of compatible display devices, allowing you to select the one that you want to 'beam' videos to and the Beam icon will appear on videos that are supported by the app. There is also a Beam Queue feature that allows you to select multiple videos which are then queued and played in order.

The advantage of Twonky Beam is that it is an open architecture application, which lets you connect with devices from various manufacturers and also allows you to stream content from multiple storage locations, combining content from your home network, cloud storage, the device itself and the web. Twonky Beam uses DLNA to locate, index and stream video, music and photos from your smartphone or tablet to any web-enabled device in your home, including Smart TVs, WiFi speakers, Apple TV and other media players. We tried Twonky Beam with an Apple TV, a Panasonic VT50 and a LG LM960 without any problems but according to Twonky, the app won't work with Sony TVs.

In terms of performance, we couldn't really fault Twonky Beam, it did exactly what it promised to do and streamed HD content to our TV. The process is reasonably quick and once the videos started playing, there were no issues with buffering. There is support for YouTube and Vimeo, among others, and along with video you can also transfer music and photos. One aspect of Twonky Beam that we liked was the multitasking capability, which allows you to select and play a video on your TV, whilst simultaneously doing something else on your smartphone or tablet. Essentially the Twonky server continues to run in the background whilst you are checking emails, surfing the net or taking a telephone call. It has some other useful features like the ability to queue content from a mixture of destinations, whether its personal video and images stored on your device or content sitting in the cloud or videos across the web. Twonky Beam even provides you with recommended channels of freely available ‘streamable’ video content from thousands of destinations across the web.

As Panasonic's new Smart VIERA platform has already shown, there is a real demand among tablet and smartphone users to share content directly with their TVs. Panasonic call it 'swiping' and they use DLNA to stream videos, music and photos directly from your tablet or smartphone to your TV. The other manufacturers are also getting in on the act, Sony have their new 'throw and catch' feature, Samsung have Allshare and Apple have Airplay. The advantage of Twonky Beam is that it is an open architecture application, which lets you connect with devices from various manufacturers and also allows you to stream content from multiple storage locations, combining content from your home network, cloud storage, the device itself and the web.

Twonky Beam certainly works and it works on both Android and Apple devices, which is a good start. It offers an innovative method of streaming content - video, music and photos - to any web enabled device in your home, including Smart TVs, WiFi speakers, Apple TV and other media players. It is very easy to install regardless of whether you use Android or iOS and equally easy to use. It has some useful features like the ability to queue content from a mixture of destinations, whether its personal video and images stored on your device or content sitting in the cloud or videos across the web. Twonky Beam will also continue to stream the content whilst you surf the web or take a telephone call, so you don't have to interrupt your viewing. Twonky Beam even provides you with recommended channels of freely available ‘streamable’ video content from thousands of destinations across the web. Oh and did we mention its free?