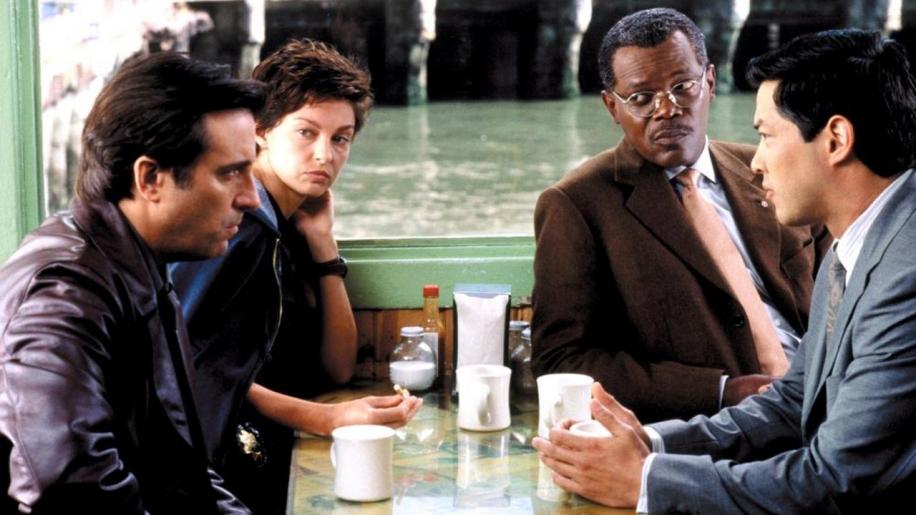 Presented in an anamorphic 1.85:1 ratio, this transfer is somewhat of a mixed bag. On the positive side, the flesh tones are natural and blacks are deep and dark. Detail level is average and colours are fine, although this is not a particularly vivid movie, much grittier in its depth. On the negative side, the print suffers from dust and scratches, which although not a cardinal sin, for such a recent movie is highly surprising. The image is grainy as well as being soft, which is why the detail levels are only average. It also suffers from compression artefacts, initially noticeable on the opening credits and throughout the film in several places. Not having a US or UK version to compare it with, I'm not sure if it's the same on all versions, but having seen the review of “Saw”, I am thinking it may be more due to Asmik. A shame as this is the worst transfer from a Japanese disk I've seen to date. Boasting both a Dolby Digital and DTS soundtrack, this is definitely the stronger part of the disk. Dialogue is crisp and clear and at no point is it ever drowned out, although this isn't a particularly busy soundtrack, but when engaged, the surrounds and front channels are very clean with good separation and dynamics. The surrounds are also nicely engaging with the atmospheric use of music and other sounds when the soundtrack is more restrained. LFE is used to good effect when required, but is a tad bass heavy, particularly when Judd falls unconscious. This is true of both the DTS and Dolby tracks with the DTS being noticeably louder. Other than volume, there's nothing to split the tracks in terms of quality, they are both quite nice. The disk starts with a directors commentary track, which after seeing the movie, wasn't something I was going to endure again! The disk then has a 10 minutes making of, which is a little gushing by the cast and crew although they definitely think it's considerably better than it truly is, in fact, hearing the director enthusing over the plot is rather amusing not to mention Judd being the “perfect” actress for the role. The next documentary relates to the police procedure aspect of creating the right authenticity for the story and the roles and it runs for 10 minutes also. It's much more interesting than the previous making of, as it features a real female homicide inspector and her input is more engaging than the movie itself, which speaks volumes. A seven minute featurette elaborating on San Francisco, which is where the movie is set and shot, which is frankly quite dull. At least it is mercifully short. 10 Deleted scenes follow and they are really just scene extensions and add nothing to the film, so there are no great losses there. Finally, 2 trailers for Twisted are present. A very average thriller/whodunit that fails due to a script with issues and an abysmal choice of leading role. As much as you can see the promise it holds, you can't help but feel annoyed about the execution. With a bit more time tweaking and finding a better choice of leading actress, this could have been quite good, but it wasn't, they didn't and it isn't. Shame.