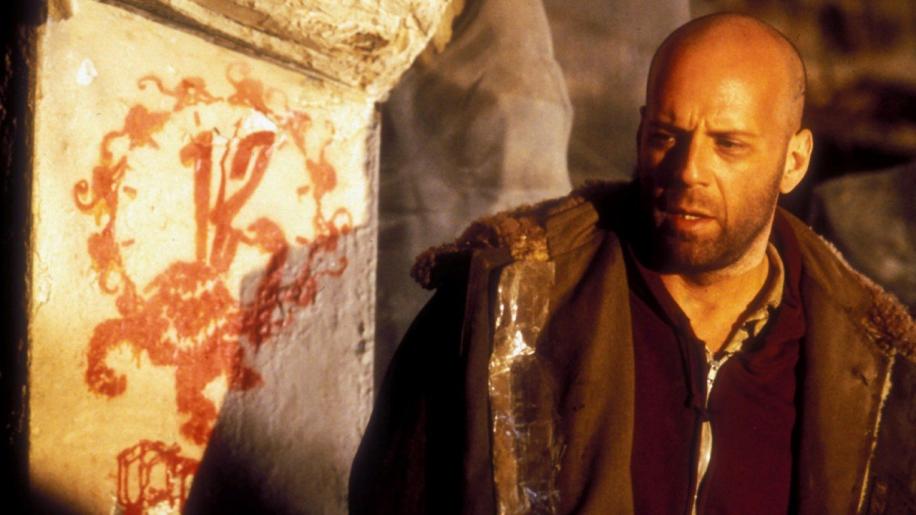 In 1996 and 1997 a powerful virus kills 5 billion human lives, leaving just 1% of the population who have to live in an underground colony. The planet is returned to the animals, unaffected by this killer virus. In 2035 one of the survivors, James Cole (Bruce Willis) is in the colonies prison complex where he is volunteered to go above ground and collect samples for the scientists. After performing this task well he is then asked to help with a new mission, the scientists have invented time travel and want Cole to go back to '96 and find the virus in its purist form, thus allowing the scientists to return mankind to the surface of the planet. Cole is offered a full pardon in exchange for carrying out this mission.

During his first trip back he is accidentally sent back to 1990 where his confused, violent actions see him admitted to a mental institution. While incarcerated he is treated by DR Katheryn Railly (Madeleine Stowe), who is compassionate towards Cole and has the strangest feeling she has seen him before. Cole also meets with fellow Patient Jeremy Goins (Brad Pitt) who is clearly nuts, but Cole learns his father is a famous virologist (Christopher Plummer) who experiments on animals with diseases. Cole then manages to escape back to his time and after explaining what has happened to the scientists is sent back again, this time to the correct year. Cole must find the army of the 12 monkeys, the group lead by Goins, who are responsible for letting out the killer virus.

You will either love or hate this movie, it is slow, ponderous yet highly addictive. Director Terry Gilliam brings the unusual and the normal head to head with his visions of the future and the fate of mankind. The plot works extremely well and even stands up to repeated viewing, I would actually state you must see this movie more than once because you will miss things first time around. The performances from the cast are superb and the direction and script are first class. Get ready for your brain to hurt, as the twists and turns are dizzying at times. 12 Monkeys is a must see movie and is certainly on my all time top 10 list.