Manny Brown puts a top-tier Turtle Beach through its paces 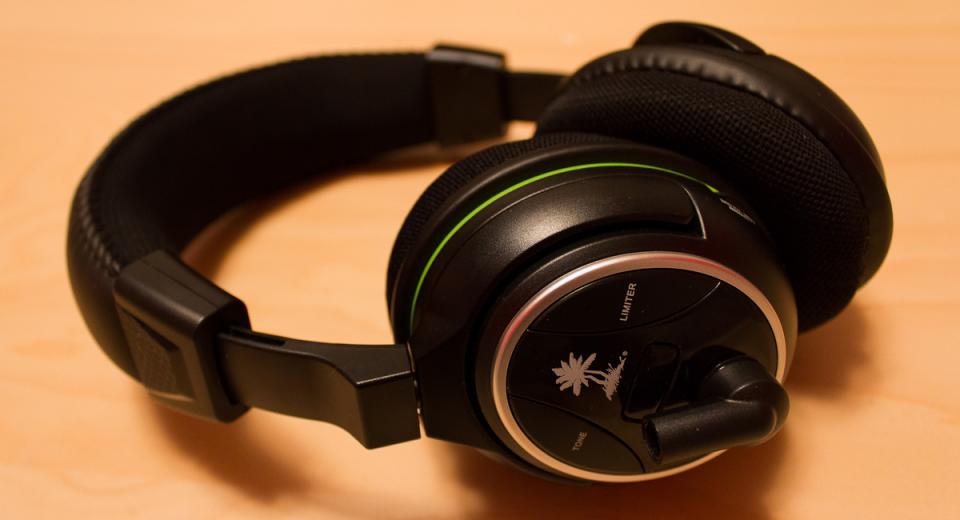 As we continue our march towards ultimately covering every gaming headset manufacturer on the planet, Turtle Beach was one brand that always loomed large on the horizon. If you’re at all interested in videogames then you’ve likely heard their name with impressive frequency over the past couple of years, but thankfully that’s largely down to an established reputation for quality products, along with a handful of marketing deals that see branded versions of their equipment hitting stores around the release of big titles.

The headset we’re taking a look at today - the XP400 - is a wireless unit compatible with any device bearing a digital optical output or standard 3.5mm stereo jack, and it sits near the top of their product range. The XP400 packs 50mm stereo drivers into a relatively lightweight housing, and utilises a dolby-based software decoder box with a selectable virtual speaker positions to create its surround soundscape. It promises up to 15 hours of gameplay on a single charge, comes packed with a detachable and fully positional boom mic, and offers up the usual suite of controls for selectable voice monitoring, microphone noise cancellation, equaliser settings and independent volume controls for game and microphone audio.

At around £135 the XP400 isn’t the cheapest option when taking its competition into consideration, but the extra money you’re spending is - in theory - going on high quality audio and several luxury features that promise to elevate the XP400’s functionality beyond its rivals. Whether or not you’ll utilise (or find much value) in the likes of a bluetooth connection to your phone, call answering during gameplay or wireless Xbox 360 chat is as subjective as it gets, but they’re available regardless.

The packaging for the XP400 is neatly designed, with a mimimal amount of uneccessary trinkets. You get the headset and decoder, a USB charging cable and optical audio lead, the microphone, a manual and that's your lot.

The build quality on the headset is nice and sturdy, although not without a suitably luxurious feel. Everything is solid and plush where it counts, and despite the rigidity of the headband, the XP400 is still comfortable at the points where it matters. The boom mic detaches and attaches with a quick twist, and it's as flexible as you'd ever need without having the widest head on the planet. We tended to leave it attached and just point it upwards whenever it wasn't in use.

The decoder box itself is the typical type of lightweight nondescript unit that'll happily sit away out of sight in your AV setup, although - like every piece of kit in 2012 - it does come with four incredibly bright blue LEDs that indicate various states of usage - which may be distracting for some.

Optical in/out ports and a single 3.5mm jack supply everything the decoder and your AV setup might need, so hooking up your devices is easy enough. The decoder can be powered on or off and all the audio selections made manually with buttons on the side, but everything can also be altered (or powered on and off) directly through the headset, making it extremely remote-friendly.

Practical Use and Comfort

Once you’ve got the decoder box set up in a suitable position and hooked up to your liking (the easiest solution being an optical out on your amplifier if you have that available), the XP400 requires a quick pairing process to connect it with its base, and it’s ready. From there, hooking up any bluetooth device is a painless process requiring a single button on the headset, and it happily picked up a connection from the wireless Xbox 360 chat dongle, a PlayStation 3, my PC and an iPad during testing. Indeed we’d urge those of you with a Siri-enabled device to hook it up and have a play around; whispering commands to your robot butler and having the results piped back into a stream of gameplay audio makes for a suitably surreal experience.

Getting the functional aspects out of the way first, it’s important to note that despite the XP400 containing its own battery and a suite of on-board controls, the headset never feels overly burdensome and can be worn in comfort for extended periods of time. Sure, it’s a long way from the suspended headband joy of something like the SteelSeries Siberia, but it proved to be perfectly workable during a mammoth 8-hour Halo 4 session on launch day, with no neck strains or hot ears to ruin the experience. A single charge lasts in the region of the advertised 10-12 hours, and the auto power-off kicks in after five minutes of silence whenever you leave it alone. The various buttons that control equaliser settings, “blast” filters (for you “pro” gamers out there) and chat volume are flat with the surface of the earpiece and so a little fiddly to access at a moment’s notice, but after a full day of use you’ll be able to adjust to their location with ease. The analogue volume and voice monitoring dials are logically mounted on the left ear piece, and very easy to reach.

In terms of further practicalities, the XP400’s boom mic, voice monitoring and independent volume levels combine to create one of the best experiences for console chat that we’ve yet had on test. Without saying a word about the equipment, people reported our voice coming through loud and clear on 360 (to the point that some folks wanted to know what we were using, such was the difference), proving again that it’s not only Microsoft’s relatively-crappy audio bitrate that hampers the experience for most users. Connecting up to Microsoft's console is a simple case of plugging the bundled bluetooth adaptor into your pad and pairing it up. The difference between this and the bundled 360 headset is night and day, and the difference between the XP400’s mic and other similar headsets is another leap again. Voice monitoring works in real-time to pipe your voice back into the mix at a level that suits you, ensuring you don’t end up inadvertently shouting at people at 3am.

In terms of the wireless functionality, the XP400 packs in a dual-band transmitter that pretty much eliminates audio interference in regular use scenarios. There is a barely-discernible low level of fuzz that can be heard sporadically when the room and/or audio source is in absolute silence (and only once you’ve tuned your ear for it), but it’s nowhere near the levels of the competition and it’s never distracting unless you’re specifically listening for it. In terms of range, the headset continued to spit out its audio feed wherever we wandered in the house, and only after putting several thick walls between ourselves and the decoder box did it decide to break down to any noticeable degree.

Out of the box, the stereo performance of the XP400 is a little flat and underwhelming in comparison to some of the other brands we’ve had on test - but then maybe that’s because they don’t pull a ‘showroom settings’ and spike things up to the maximum by default. You can quickly tap a button to cycle through each of four EQ settings to boost treble and low-end bass to your liking, and various combinations of these brought out some excellent results dependant on the material. Pounding rock music sounded great when piped through mode 4 (bass and treble boost) with the decoder box set to disable surround processing, exhibiting decent vocal clarity and a warm low-end that never threatens to overwhelm the sound. The XP400 can’t quite match the dedicated 50mm stereo gaming headsets in musical terms (and it’s a good distance from audiophile standards) but for the money it’s definitely above average and never less than compelling.

Although stereo performance is always a nice boon, it’s not the primary attraction for a headset of this type. Once that proprietary Dolby headset-specific surround processing is switched on and you’re into any suitable game, the XP400 really starts to prove its worth. Again, left in EQ mode 4, the XP400 proved itself to be an excellent performer for all genres of gaming. Surround audio is easily placeable and a little tighter than the competition, with virtually none of the cavernous echo that plagues some units - even with the virtual speaker placement set to their widest configuration. Forza Horizon's in-car view produced a brilliant sensation of the engine roar positioned just behind or in front of your seating position, whilst a decent level of bass complimented both the environmental audio and the soundtrack to a great degree. Smaller-scale titles like Fez and The Walking Dead also both benefited from the intimacy, warmth and cleanliness of the sound. Interference was nowhere to be heard.

Fortunately that didn't mean the XP400 couldn't pack a punch when it came to showcasing depth either. FIFA 13's stadium atmosphere was projected a suitable distance from the ears, whilst the likes of Borderlands 2 showcased a good mix of both ranges - driving wind and snow flurries were easily identifiable as close by, whilst echoing gunfire and vehicle sounds projected far into the distance. The XP400 is perhaps not quite as stratospherically 'deep' as some of the units out there, but it is brilliantly balanced instead. If the trade-off for losing a tiny portion of that sensation of distance comes in the form of interference-free wireless and well-rounded audio for everything else, then it's not really up for debate; the practicality wins out every time.

With well-rounded audio, an impressive feature list and good build quality, Turtle Beach's XP400 is worthy of serious consideration if you're in the market for a surround headset that'll work with any device featuring an optical or standard analogue 3.5mm output. Stereo performance is decent, but surround sound gaming is where the XP400 really sings, and it packs a fine punch whether you're into shooters, RPGs, racing games or any other genre you'd care to mention. The almost total lack of wireless interference and light weight of the headset is worth its weight in gold for lengthy playing sessions, and its suite of headset controls mark it out as one for tech fetishists.

And whilst the XP400 might be a little expensive when compared to its direct competition, if you can stretch to the extra funds, the finer touches really set it apart. Although the Tritton Warhead is technically the only completely wireless headset for Xbox 360 on the market, the XP400's solution of introducing a tiny bluetooth dongle for the 360 pad effectively shunts it into the same bracket, and it's hard to oversell the benefits of ditching those cables from your setup. Regardless as to your console allegiance however, the real-time mic monitoring works perfectly to help control your vocal levels during online chat sessions, making the whole experience far closer to a natural conversation than others that drown out your own warbling.

Once you add in the lengthy battery life and relatively short charging time, the practicality of the XP400 begins to outweigh any slight shortcomings that it might have. When you couple the obvious utility benefits with sound quality that mixes it with the best gaming headsets we've had on trial, then you have a product that's difficult not to recommend. There are small touches that Turtle Beach could improve on (more control over EQ presets being one), but for now, the XP400 is practically everything you want - or need - it to be.