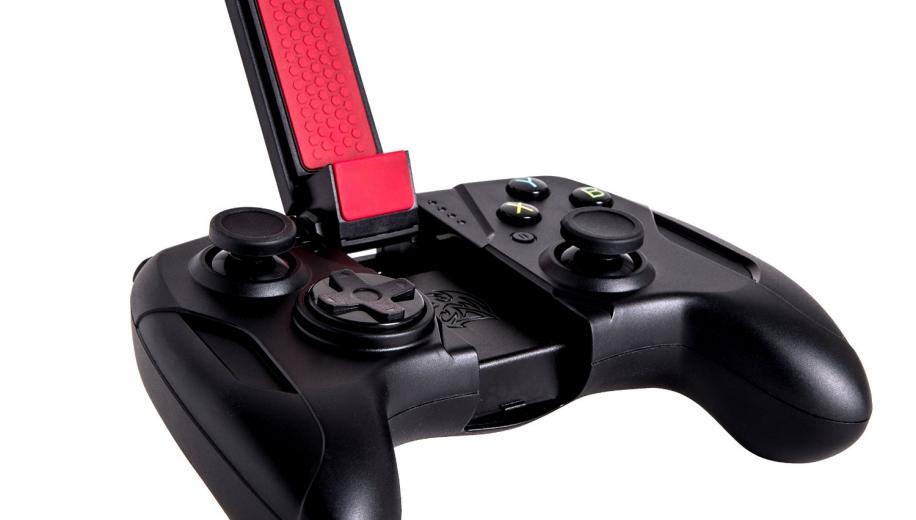 Thanks to the ever increasing power, ease of use and availability of smartphones and tablets, the global mobile gaming revenue has in 2015 exceeded consoles for the first time and it doesn't seem to be slowing down either. With every mobile game having additional paid content to unlock a particular item quicker or get to that tricky next level, it's no surprise that the global mobile gaming market is estimated to be worth $30 Billion in 2015.

It was a great day when GTA3 arrived on iOS, only to find a very fiddly control system that made you long for a controller. Well, thankfully, that is no longer an issue. In what appears to be an ever increasing market, the Bluetooth Gaming Controller is here to solve all your fiddly finger related issues. The controller we have up for review is from Tt esports (a Thermaltake brand). The Contour mobile gaming controller is MFI certified (that's not the kitchen people) and includes a nifty spring loaded clip to secure a wide range of iOS devices. Coming in at £50 its at the top end of the market so has a lot to prove. Read on to see how we get on.....

Let's start with the best feature of the Contour, the adjustable clip. Opening from the middle of the controller the spring loaded clip has soft rubber tabs and back and extends giving clearance of 80mm which is enough even for the latest gigantic iPhone 6s Plus. The clip is one of the best we have seen on a mobile gaming controller and held our iPhone securely in place. Even when shaking the controller wildly about the phone did not move at all and gave great confidence that it wouldn't fall off, ever. It can be fitted instantly and requires no fixing or setting up as with a few other controllers. The controller, itself, is all matt black (save for the red rubber on the clip) and feels well balanced, although that was with our smaller iPhone 5, with a large iPhone 6s Plus it may feel slightly top heavy. The two analogue sticks are responsive, but we did find the soft rubber surface slightly too slippery for our greasy little thumbs and occasionally slipped off. The D-Pad works OK but could be a bit more responsive for our liking and the XYAB buttons are well positioned and have a good springy feel to them.

All mostly positive so far, but there are some troubling issues. The shoulder triggers and buttons are very disappointing. They feel the complete opposite to the decent quality feel of the analogue sticks and XYAB buttons. The L2 and R2 triggers feel very cheap and could have benefited from a much stronger spring and L1 and R1 buttons are even worse. Depending on where you press the button you will often get no response at all.

Further complaints are with bizarrely placed indentations in the plastic on both sides of the controller. We have no idea why they are there or what purpose they were meant to serve other than being very annoying whenever you are using the controller. They are in completely the wrong position and we found our left thumb starting to wear due to being on the edge. A strange design choice and one we hope they rectify in future builds. The position of the screw holes on the back could also do with a rethink as when not using the shoulder triggers or buttons, the resting position of our finger seemed to be placed uncomfortably on these holes, which caused some discomfort after a long gaming session.

The setup was very simple and easy to complete. Simply press the power button on the controller and Tt esports Contour should appear in your list of Bluetooth devices on your iOS device, select it and after a few seconds the devices will be paired. The Contour can only be paired to one device at a time so if you have an iPhone and iPad for example you will need to hold the Bluetooth button until the LEDs flash to reset the connection and allow you to connect to a different device.

There appeared to be no detectable lag issues with the Bluetooth connection and button presses registered instantly. We did have very occasional disconnect issues with games such as Galaxy on Fire HD or Real Racing where it would stop responding, but this was very much a rare occurrence and difficult to pin down to our devices, the controller or even the game itself. The claimed battery life is over 10 hours and during our time testing we didn't actually run the battery flat, although we gave it a good try. It's definitely not something you need to worry about going flat quickly and your iPhone would be go flat many times over before the controller does! It comes with a micro USB port and cable to charge the Lithium ion battery, although there's no plug so this has to be done via a computer or compatible charging device.

The Contour states compatibility with the iPhone 5 and above, iPad Air and Mini and above and 5th Generation iPod Touch, but testing with an iPhone 4 we found it to work too, suggesting older iOS devices not listed could be compatible. Obviously an iPad won't fit into the spring loaded clip so has to be used separately but still works very well, if slightly awkwardly until you can find the most comfortable position for the iPad.

Unlike some Bluetooth gaming controllers, the Contour does not require an app to work. With a compatible app installed it will automatically detect a controller and allow its use. Some games do come with a greater customisation allowing you to change the controller configuration, but others you simply have to find out what the button does what and if you don't like it, that's tough!

There are currently hundreds of games compatible with the Contour including favourites such as the Grand Theft Auto series, FIFA15, NBA2K and a lot of the popular racing games. A full list can be found here: http://www.ttesports.com/img/contour/ttesportsGamesList.html.

The Tt esports Contour controller added an exciting new level to our mobile gaming offering much greater precision and a more fun experience in a wide range of games than using touch alone. The overall build quality is good with a superb clip design and excellent battery life, but there are some issues with poor quality shoulder buttons together with a rather confusing design choice to have indentations and screw holes in completely the wrong place. It's almost like someone forgot to pick up the controller and hold it during the design stage.

In what is becoming a very popular market, £50 for a Bluetooth gaming controller just seems too expensive. If it could somehow work with a PC for example (it doesn't by the way) that would increase its saleability by a long way. With the likes of the popular SteelSeries Stratus controller coming in at around £30 and a multitude of alternatives starting from just £10, at £50 the Tt esports Contour looks like it has a tough job on its hands. Knock £20 off and you probably have a winner.