"You tell the angels in heaven you've never seen evil so singularly personified as you did in the face of the man who killed you." 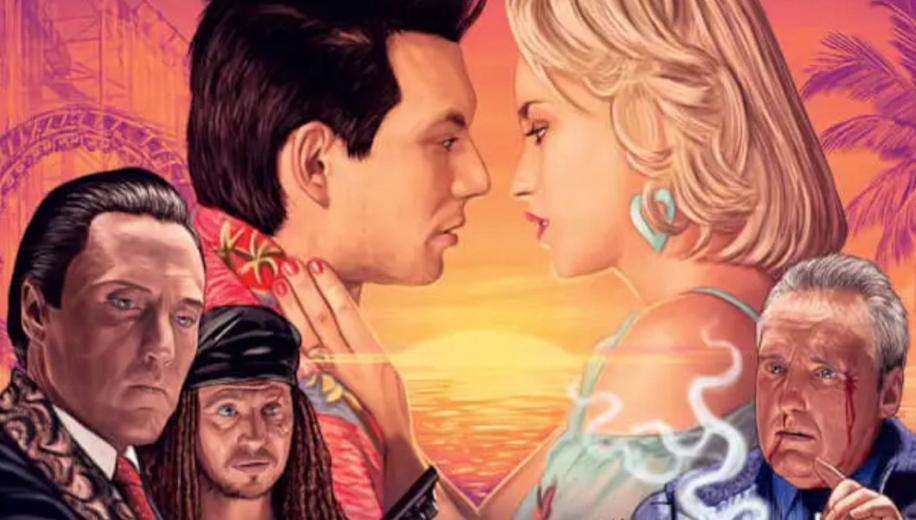 Christian Slater, Patricia Arquette, Dennis Hopper, Christopher Walken, Gary Oldman, Brad Pitt, Val Kilmer, Samuel L. Jackson, Tom Sizemore, James Gandolfini, Chris Penn: easily one of the greatest ensemble casts in the history of cinema. Then there's an eclectic selection of song tracks, lashings of unflinching violence, several tense confrontations and standoffs, a razor-sharp script packed with infinitely quotable dialogue, a number of iconic monologues and a plethora of film references? So... what part of this movie isn't Quentin Tarantino? Before the guy unleashed his debut Reservoir Dogs, or really achieved any kind of fame whatsoever, he sold off a trio of great scripts, one of which was picked up by established director Tony "Top Gun" Scott. It happened to be reportedly Tarantino's most personal work, fashioning a protagonist anti-hero out of a kid with an encyclopaedic knowledge of film.

... it's that script that stands out, gifting each and every one of the myriad now-familiar faces with some truly choice dialogue

And despite it being, in many ways, trademark Scott - the visual style, the sunset LA setting and Hans Zimmer's instrumental component of the score - it's that script that stands out, giving Slater arguably the best role of his career, and gifting each and every one of the myriad now-familiar faces with some truly choice dialogue. Beyond the lead duo, on their own riff-on-Badlands journey (complete with excellent use of the Badlands signature theme), we get colourful pimps, drug dealers, the Sicilian mob, film producers, wannabe actors, pot-heads, hitmen and cops, each rounded out with their own perfect moment. Whether it's the fantastic one-of-the-greatest-scenes-of-all-time moment between an against-type Dennis Hopper and a menacing Christopher Walken, the clash between Slater and Oldman, the brutal face off between Arquette and James Gandolfini, or just Brad Pitt mumbling to himself on the sofa in a dopey haze, Tarantino's script makes each and every one of them shine, with Scott's oozing-cool, sun-drenched visuals the icing on the cake. Outstanding.

True Romance comes to UK 4K Ultra HD Blu-ray courtesy of Arrow, with no immediate US release on the horizon. This Ultra HD Blu-ray release boasts a gorgeously faithful native 4K restoration further blessed by Dolby Vision, affording both the Theatrical and Director's Cut in 4K on the same disc via seamless branching.

... it isn't a perfect presentation, but it does a hell of a job with this material, and it should make any fan pretty damn happy

As a Tony Scott film through and through - at least visually - True Romance must have been one hell of a challenge to render in a way that is at once faithful to the original perceived intentions of the director and the look he gave it, replete with smoky, shadow-strewn rooms and blue light, but Arrow have done a stand-up job. Coming to the film for the very first time and some viewers may not get what the fuss is about at all, enjoying a few undeniably stylish moments for sure, but also wondering why some of it is a little more raw and gritty, and why there's so much damn smoke everywhere. But those familiar with True Romance will love this presentation, lapping up the fine texture, the skin details and the fabulous colour tones, as well as the fact that, hell, it'll make you feel like you're watching it projected in the cinema, with gorgeously restored, cleaned-up image but one that's also utterly, utterly filmic.

Sure, there's some softer touches - it's a Tony Scott movie after all - but the beads of sweat, facial hair, clothing weaves, dilapidated apartments, snow-dressed streets and classic cars with all their fine detailing will just leave you with a bounty to marvel at, forgetting about the rougher shots and hazier scenes in favour of everything that looks gorgeous and rich and filmic. Speaking of rich, the colour scheme is the very first thing that will jump out at you, with neon signs making the screen pop with intensity. Vibrant blues, laser reds - the signs are just the start of it, with the lighting searing across the scene. Even Alabama's blue sunglasses stand out. Several shots and entire sequences are bathed in some fabulously rich and vivid tones - the confrontation with Drexl a standout in balancing the myriad colours perfectly - with black levels handled expertly, and those aforementioned cool blue shots (often in Clarence's apartment) looking tremendous. And those trademark Tony Scott LA sunsets and sunrises? Gorgeous. It isn't a perfect presentation, but it does a hell of a job with this material, and it should make any fan pretty damn happy.

True Romance's 4K Blu-ray release doesn't have any kind of object-based 3D High Definition immersive audio update in the form of Dolby Atmos, but fares well enough with its original tracks, both DTS-HD Master Audio 2.0 and 5.1, with - rather unusually - the former coming across as slightly more balanced.

Dialogue comes across clearly and coherently throughout, keenly prioritised across the frontal array, and rendering all of the memorable, quotable moments superbly. Effects are still entrenched in the period of filmmaking, but we get some hefty gunshots - shotguns making an impact - screeching cars and growling engines, particularly from a rare 911 flatnose, some brutal and punishing body blows with smashed glass, broken mirrors and serious bodily damage, and plenty of ambience to bring the streets - and, of course, LA - to life. The climax is positively bursting with intensity. Zimmer's score lends some class to the proceedings, whilst the song tracks further energise it, and overall it's a very nice track indeed. The 5.1 mix is hardly a slouch but is undeniably over-aggressive, affording a slightly questionable balance over the rest of the mix, and leaving everything a bit booming, whilst hardly expanding out across the array it has at its fingertips, but your mileage may well vary. Either way, it's nice to have the choice.

Arrow's 4K release of True Romance comes in a number of different flavours, including Limited Edition packaging and Steelbook options, or a Steelbook in Limited Edition Packaging, but it also makes its single 4K disc go a hell of a long way, not only affording space for both cuts of the film in 4K but also porting over a plethora of tremendous extra features onto the 4K disc proper.

... an utterly comprehensive package, itself mounted in a lavish box set

We get a slew of Audio Commentaries which, if you include the scene-specific Commentaries, will likely hold the record for the most Commentary tracks ever for a single movie, with separate full-length Commentaries from Tony Scott, Quentin Tarantino, Slater & Arquette and film critic Tim Lucas, and further Select Scene Commentaries from Dennis Hopper, Val Kilmer, Brad Pitt and Michael Rapaport, all recorded in 2001, and new 2021 Select Scene Commentaries from Bronson Pinchot and Saul Rubinek. Then there are five New Interviews, with costume designer Susan Becker, editor Michael Tronick, and composers Mark Mancina and John Van Tongeren, while Larry Taylor waxes lyrical with his expansive knowledge of all things Tony Scott, and Dan Storm talks about the Cadillac he now owns from the movie. Half and hour of Deleted & Extended Scenes, and an Alternate Ending, with optional Commentary, the original Electronic Press Kit, some Image Galleries and a few Trailers and TV Spots round out what is an utterly comprehensive package, itself mounted in a lavish box set complete with artwork, a poster and even a tattoo. Glorious.

True Romance is so very easy to categorise as a Tarantino movie, despite the fact that - visually - it's quintessential Tony Scott. The all-star cast, the perfect dialogue - it's all a little bit of non-linear editing away from being classic Tarantino. And it is classic Tarantino, and classic Scott, all at the same time.

Arrow's 4K Ultra HD Blu-ray release of True Romance - thus far not announced for a US counterpart - is a thing of beauty, not just in its supremely faithful native 4K Dolby Vision-enhanced presentation of both cuts of the movie, but also in its packed-to-the-brim-and-then-some plethora of comprehensive new-and-old extra features, all wrapped up in a gorgeous box set. An absolute must-have.

True Romance is released by Arrow in the UK and available on 4K Ultra HD Blu-ray™ from July 19th.