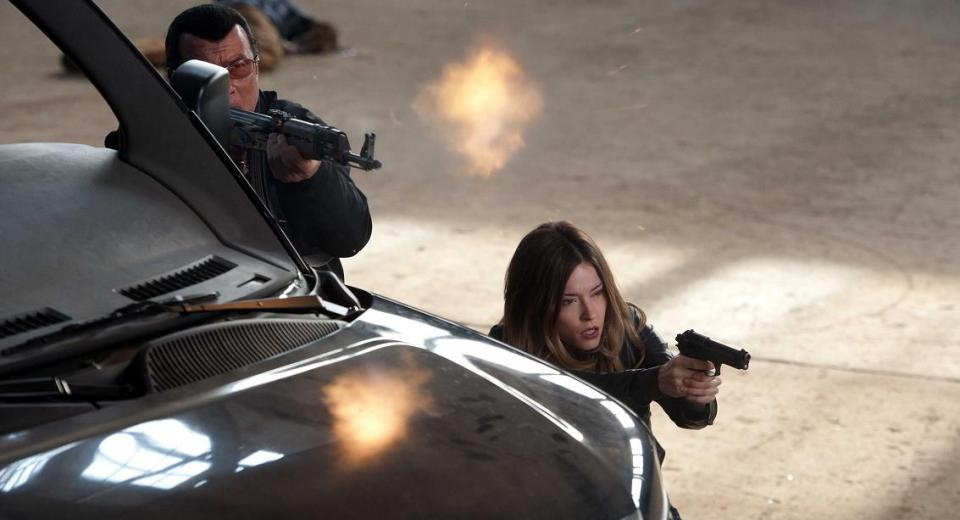 If you followed the first season of True Justice, then you know what to expect from the video quality. It’s decent enough presentation – particularly for a TV show – but it doesn’t stand up when promoted as a feature film. Hitting UK Region B-locked Blu-ray, complete with a 1080p video presentation in the second season’s original broadcast format of widescreen 1.78:1, these two episodes of Season 2 of True Justice look reasonably good, boasting the same kind of production values that fans have come to expect from the low-budget-but-hides-it-well TV show.

Detail is generally excellent, and quite pleasantly this season premiere boasts a fair few quality exterior sequences, which occasionally even look a tiny bit impressive. There is some fine object detail and there are also no overt signs of softness, edge enhancement or digital defects. The colour scheme is reasonably well rendered, with plenty of colourful interiors and a few unusual tints. Black levels are strong and deep, allowing for decent enough shadow detail and impressive night sequences. Whilst it’s not quite demo quality reference material, it’s not far off.

It’s also worth noting that the previous double-episode release from True Justice Season 2, Blood Alley, boasted some rather strikingly annoying distortion. It was intentional, of course – designed to make Seagal look thinner by squashing the entire image – but the side-effect was that it also took the picture quality down a notch, aside from being just damn distracting. Thankfully it was just a one-off. These episodes (and, indeed, the rest of the season) were shot and are presented in their original aspect ratio with no distortion. I guess the production company must have just decided to accept Seagal’s weight and not try cheap effects to fool viewers. The second season continues on in good fashion with this solid DTS-HD Master Audio 5.1 track, which boasts reasonably clear and coherent dialogue (yes, even from Seagal, who is – for once – not dubbed at all during this particular double-episode) largely emanating from across the frontal array. There are some more energetic moments, like the sniper shot which offers up a wonderfully satisfyingly shot ringing out across the array, or like the end of the first episode, which is assault rifles a-plenty, as Kane and his team get caught between Mexican mobsters and armed robbers in a warehouse. As usual we get a couple of decent (for a TV show) explosions thrown into the mix – which bounce around your living room – as well as the par-for-course bone-crunching body blows that you would normally associate with anything starring Seagal. Surrounds don’t get a wild workout, but, along with more than a little noticeable LFE input, this is a perfectly serviceable track that does justice to the double-episode. Nothing but another one of those Trailers which attempts to paint this double-episode as a feature film. Idiots; they’re not fooling anybody. Worse still it’s basically less a trailer and more a montage of all of the best bits from the double-episode. Yes, I know that’s what most trailers are like, but this one actually shows the outcome of the final fight (as if you couldn’t guess it) and the twist right at the end of the second episode. Double-idiots. Do not watch this before you’ve seen the episodes themselves. Just as Seagal’s already-pretty-average TV series True Justice reached an all-time low in terms of distorted presentation (designed to make the Big Guy slimmer, no less!) the next double-episode arrives – Violence of Action – and turns things around somewhat. Not only is it a quality little instalment for True Justice fans, but it also presents Seagal in his correct proportions (for better or worse). If you’re one of those hard-suffering fans who has made it through the entire first season and halfway through the second then this is definitely a must-have purchase. If you thought this was a new Seagal movie – think again – the only new movie he’s done in the last couple of years is Maximum Conviction, which is coming up next.

This Region B-locked UK release has pretty good video and more than acceptable audio, with just a terrible trailer in terms of extras (terrible in the sense that it shows all of the twists and turns, reveals the entire ending, and shows the outcomes of every single fight). Those who have picked up or watched every single other episode in the series so far should not try and resist this addition, even if a Box-Set release is long overdue for this mis-managed, mis-promoted show.