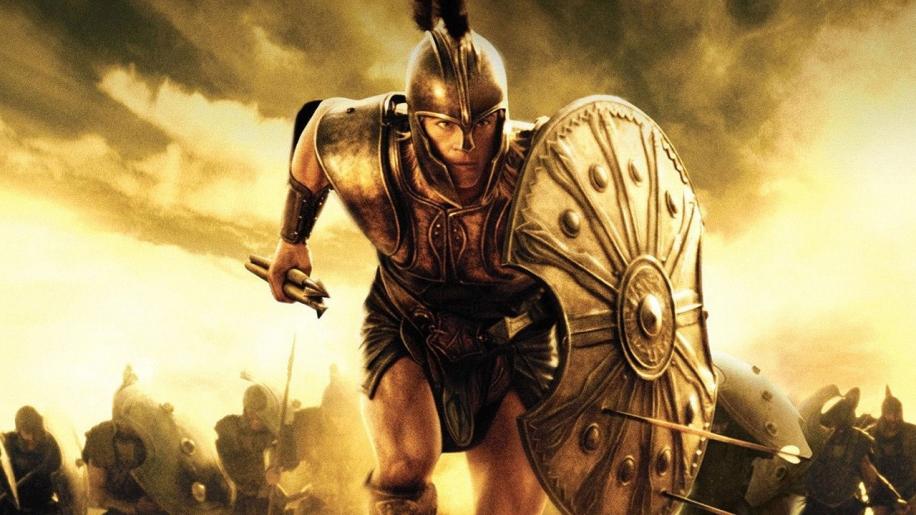 This is a nearly perfect picture. There is some feint shimmering and a little grain, but that's it. Despite some hectic night scenes, and some tricky high contrast day sets, the picture never fails to impress. Colours are vivid without appearing gaudy. A scene where Odysseus meets Achilles is as natural as they come, and a close up of a hand grasping a spear is realised in fantastic detail. Moire patters are never seen, despite the intricate detail of some of the troy sets, or the regular patterning of Troy's huge armies. The only real letdown is some slight schism in the framerate when a special effect takes over. This is apparent in the Hector/Achilles duel, but crops up enough to prevent a perfect score.

Right, first things first. Whoever decided that a constantly wailing banshee voiced woman was a good leitmotif for Troy's soundtrack wants shot at dawn. There were some parts of Troy that were almost rendered unlistenable because of this. I suppose that if you don't notice these things, then they aren't so bad, but to me it was like listening to nails on a blackboard. Otherwise Troy has a competent soundtrack that has plenty of bass and fluid pans across the back array. 7.1 didn't seem to make too much difference, with 5.1 providing just as much enjoyment. Clearly the battle scenes are cranked up to fever pitch, especially the rolling fireball scene. Again, though, I feel that the centre channel has the most delicate of balances, requiring a good centre speaker to fully unveil the soundstage. O'Tooles gritty vocals, for example, presents an unmistakeable aural texture to the listener or sand shifting underfoot as Achilles and Hector fight it out. Bass can be a little overcooked, tending to rumble on rather than punch. I tried some different sub settings, but nothing could tighten the bass response up.

In the Thick of Battle is a pretty enjoyable insight into stunt co-ordination. Various experts are seen to valiantly attempt to train what seems like a large proportion of Mexican civilisation into an onscreen army. One on one combat, from their cumbersome beginnings to their ultimate onscreen bravado depicts just how much effort went into dragging these volunteers into shape. Clearly, some of the instructors were getting more than a little frustrated at a certain lack of progress.

Considering the grandiose set design it is only proper that a featurette is dedicated to this topic. From Ruins to Reality examines the stunning scenery, with interviews from what appears to be genuinely impressed actors. A production disaster is also investigated: a freak storm tore the entire Troy city gates apart - a massive construction with unthinkable manhours of effort used in its build. The solution? Just build the whole thing again from scratch - you can see the scale of this effort in one of the screengrabs.

Greek mythology is a fascinating subject, one that has captured and ignited the imaginations of many, whether it be Xena or Jason of the Argonauts. Gallery of the Gods goes some way to assuaging the lack of the true mythical content in Troy proper. Backstory of Paris is expanded, his task of choosing the most beautiful goddess by Zeus, and the subsequent fallout is explained. Which sides the gods chose, and why, adds significantly to the mythos that is feathered by Troy but never grasped.

While some people may bemoan the fact that Troy does not entertain the God's role from the Iliad and other omissions, I found Troy to be a surprisingly good movie. There isn't much depth here, and perhaps a bit too much po-faced characterisation, but a few performances, notably Cox and Pitt, make Troy eminently enjoyable. If you can bear that wailing soundtrack!