"I could do a better job running the country!" 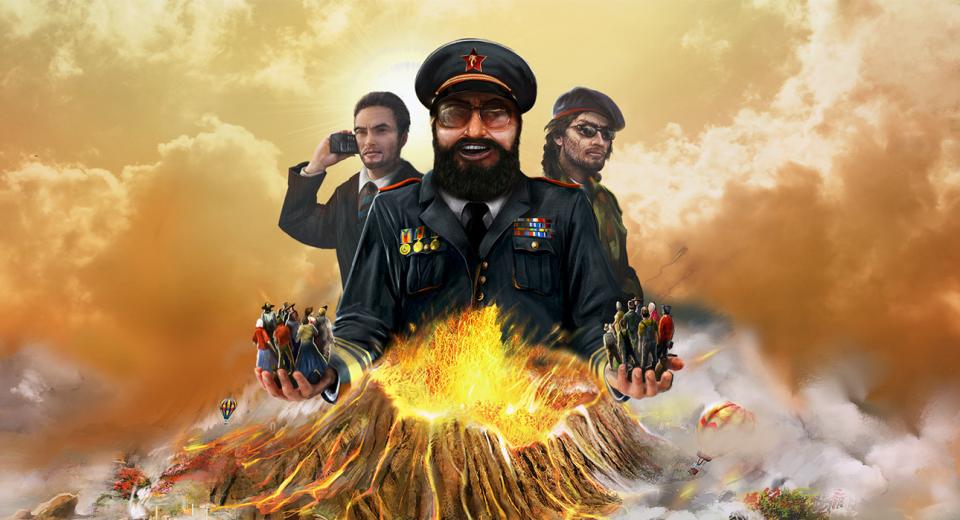 The USSR battleship Secret Plan is ominously hanging around on the shore of my island.

My advisor, the ever loyal Penultimo, has told me that this particular ship is carrying nuclear warheads and is planning on levelling my island within the next two years.

I do what every good world leader would do - dialled 1-800-PRESIDENT and grassed on the USSR to the Americans. It didn’t do me much good, however, as the warheads were soon in the sky, despite America’s backing. My small island nation, through mismanagement and complacency, was not only wiped off the map, but solely responsible for World War III. Heavy stuff for one’s conscience.

Back to the now irradiated drawing board, I suppose.

Tropico 5 is the latest in a long line of Tropico games that were really thrust to the forefront of city-building simulators with the release of Tropico 3 in 2009. A multiplatform released on Windows and Xbox 360, the game was met with favourable reviews and commercial success.

Unlike earlier city-builders, Tropico had you placed in the shoes of El Presidente, a dictator of a banana republic. Tropico offered you the unique opportunity to cement your power in somewhat dubious ways.

You don’t think you’re going to win the upcoming election? Fine, no elections. The leader of a certain faction has a grudge against you? Just have them killed! This unique approach to city-building also paved the way for the politics of Tropico to shine. You’re not just building a city, you’re also building a power base with the numerous political factions on your island. Causing too much trouble for a political party on Tropico can cause revolts, strikes and even revolutions. Annoy world powers and you might just get invaded.

As such, Tropico set its foundations as a political and satirical city-builder, with some of the best humour you’ll find in video games. Tropico 4 followed suit, expanding 3’s good work. Now, Tropico 5 is here and has shaken up that old formula, but only slightly.


You’re not just building a city, you’re also building a power base with the numerous political factions on your island.

One thing worth mentioning about Tropico 4 was the slightly overzealousness in releasing DLC. DLC packs would arrive for £4 each and include a new building, character trait, character outfit and a mission. For what they were, they were expensive. One such DLC was a ‘quick-dry cement’ pack whilst another added a military academy and some military outfits. Take in to account the number of DLC packs that came out (there are 11 on Steam), and Tropico 4 was ripe with expensive (in relation to the content you’re receiving) DLC packs.

I mention this because Tropico 5 reeks of this monetisation tactic. Customising your character will only give you 5 outfit options, where Tropico 4 supplied dozens on release. The whole character creation experience feels lacklustre in comparison to Tropico 4. It’s unnecessarily cut-down and devoid of content, and the sneaking suspicion is to make room for future DLC packs.

Instead of detailed options regarding your rise to power and your personal character traits, you now choose one trait that impacts your city ever so slightly. No more rise to power options, only one trait and a huge lack of cosmetic customisation options make your initial time with Tropico 5 feel foreboding, like more bad things are to come. You’ll be happy to hear, though, that that’s not the case.

Not so Cold War

Tropico 5 has mixed up the classic formula ever so slightly. Instead of your island being stuck in an undefined Cold War era throughout, you now experience 4 eras representing the early, mid and late game stages. A particularly Americanised view of history, you begin in your colonisation era, moving on to World Wars, then into the lovely Cold War, and finally the modern era. Particular buildings and actions are locked to certain eras and as such, your progress throughout the game is firmly set out before you. Commendations must be made of the differentiation between buildings in certain ages. Entering the modern era will open up buildings that mainly consist of towering skyscrapers, which instantly gives your city that 21st century feel. These changes aren’t really felt until the modern era, however, as the world and cold war eras can easily be confused for the other if you’re not paying attention. That said, the variety of buildings from era to era is a refreshing change from the usual grey, stereotypical USSR-esque apartment blocks seen in previous Tropico games. This time around there’s a lot more colour and height to your building choices.

The campaign has you partake in missions surrounding ‘the Order’, a shady group of the world’s elite, reminiscent of the Illuminati. They’re fun, although often uninspired in their win states. ‘Get this much money in your personal bank account’, ‘build an army capable of defending your city before this timer runs out’ and other objectives all feel like things we’ve seen before from previous Tropico games.

My favourite new addition is multiplayer mode. In it you’ll have the option to either PVP or cooperatively build a city on an island shared by 2-4 players. It’s a great new way to experience Tropico and often feels like a light RTS game. The only issue so far with it is the long waiting times - it can often take over five minutes to find a game. Concerning performance, my rig is far from a powerhouse, but going in to Tropico 5 I had every confidence that it was going to be a smooth experience on ultra. For the most part, it was. There are the odd issues with the frame rate dipping to below 30 during times when nothing’s really happening. The dip will only last a couple of seconds, but it’s long enough for it to be noticeable and sometimes frustrating.

Running with a 7970 and an 8320 Black Edition at 1080p, I averaged around 60FPS early game and 45 when my cities began to grow on ultra settings. Do note that these were taken when the view was zoomed as far out as possible. Zooming in even slightly does often improve your FPS if you’re chugging particularly bad. It’s not a huge leap in frames, but it’s something to keep in mind. Obviously this can all be fixed by tweaking your graphical settings, as on medium I ran consistently at a smooth 60FPS with the occasional dip as mentioned earlier.

Cranking it up to ultra is really worth it though. The texture work, particularly on the plantations, is gorgeous. Dynamic shadows really bring vegetation to life and the water effects reminded me of the great liquid work in Assassin’s Creed 4. Some buildings have, admittedly, been brought straight from Tropico 4 with a texture update, but most buildings are unique and modelled fantastically.

At its very core Tropico 5 is a large expansion of the foundations set by Tropico 3 and 4. If you’re a fan of the previous games then you will recognise a lot of the old formulas creeping in once you get to the late-game. It’s not something that should put you off, but if you were a critic of earlier titles then there isn’t much in the way of change here for you.

For those of you who are either new to the series or an old fan, I can’t recommend it enough. There’s still that charming humour behind everything you do. There’s still numerous paths you can choose to solidify your power and there’s still a huge amount of ways to build and sustain your city.

Those familiarities may be a problem for veterans of the series, and understandably so. It’s undeniably iterative, but for me it does just enough to make it feel like a fresh way to experience Tropico. It’s a game that you can easily lose a whole day to and not feel like you wasted any of your time.