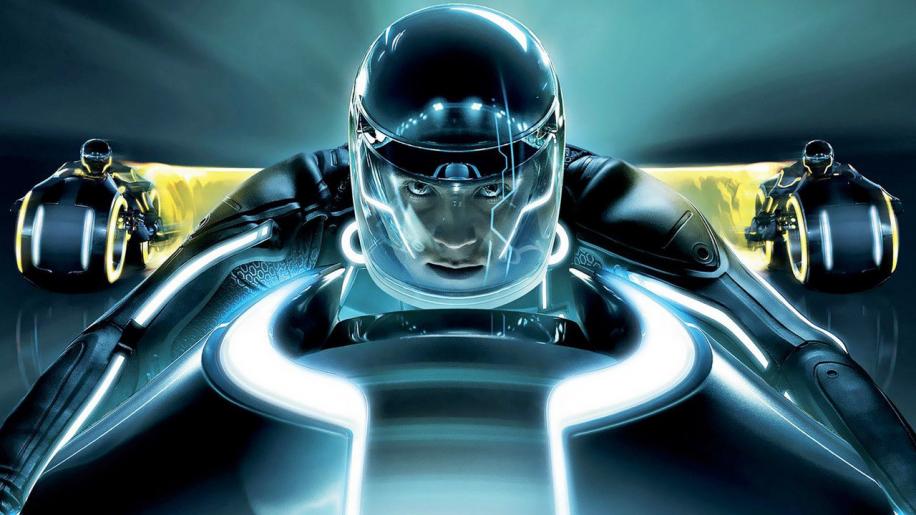 I know I’m a bit late to the party, what with two reviews and a lengthy discussion already on site, so I don’t propose to go into too much detail about the synopsis of Tron: Legacy, preferring to discuss the 3D elements of the film which is why, after all, this particular review exists; so I will content myself with observing one or two thoughts and musings about the film in general and, perhaps, one or two elements in particular. Barring in mind the wide availability of reviews and the film itself, I feel no shame in writing what some may consider spoilers in this essay, if you are sensitive to such things, please skip straight to the Blu-ray review.

Unlike the film’s target audience I am actually old enough to remember seeing the original Tron when it first hit the cinemas in 1982. Now I don’t claim to remember much about it, I was after all only thirteen, but my overall impression was one of light and sound – computer graphics, the much touted tag line, were, at the time, beyond anything that had been seen before and whilst it had a healthy dose of cheese, it also hinted at a far more sinister idea of being lost in a virtual world. (An idea that is not so farfetched now). More a landmark for its creativity than for its story, which was complete and never needed a revisit, Tron has nevertheless remained with all those that saw it nearly thirty years ago. One thing to be thankful for; Tron: Legacy is a sequel and not a remake, so with that in mind let’s take a look at how the world has changed.

Legacy takes place in ‘real time’ after the events in 1982, Kevin Flynn, after getting back to the real world spends his nights back in the Grid, trying to create the perfect digital world, his helper programme, Tron, is there and to aid him he creates Clu, a digital replica of himself, to carry on the work while he is in the real world during the days. Clu, being digital, takes his program literally, he works on creating the ‘perfect’ world, and in that Flynn, himself, being human, is imperfect, as is Tron, a creation of the ‘old’ system, and so he stages a coup and takes over the Grid, forging it in his own image. This, we are told, happened around 1989, when coincidentally, Flynn disappeared from the real world leaving his son alone. We enter the Grid twenty years later where Flynn, tired of fighting the good fight and having seen so much destruction, has become a recluse, hiding off the Grid, lonely and forgotten. Jeff Bridges resurrects his character, this time older, wearier, but not necessarily wiser. A broken man living a life of hiding in a world he created, unable to save the programme, or influence the system, for fear that his disc, the master key would fall to his nemesis – years of fighting have taken their toll; his is a life of mere existence to maintain a status quo, no matter how dark that be. Bridges plays the part with the quiet aloofness of a man resigned to his fate, and he does so with great skill as we find ourselves as frustrated with his indifference as Sam does. As he stands overlooking his creation, watching as it falls into chaos, draped in robes with his dishevelled hair, was it only me that felt a God like motif was being alluded to? A creator that has been overlooked by the arrival of a ‘fallen angel’ a mirror image of himself destined to reshape the world in his own image, a perfect form, unobtainable due to the inherent weakness of the fallibility of man, thus reimaged as the best fit model. Questions about faith and Father/Son relationships with regard to the architecture of life are only hinted at, and are perhaps beyond what the film-makers were trying to achieve – nevertheless they are there if you know where to look. With the latest ‘anti-aging’ computer technology Bridges was also able to play Clu, and he does so with a megalomaniacal glint in his eye that is at the very root of insanity – but at the end there is still that pleading of the childlike need for acceptance and it is a testament to Bridges skill that he is able to work through the computer trickery which, let’s face it, isn't actually that good ...

It is only the impulsiveness of youth that finally brings Flynn out of his melancholy when he has to mount a rescue mission to save his real son, held hostage by the minions of evil. Flynn arrives not as light, but as darkness, fingers dipped in the inky blackness allowing his own programmes to take the advantage of the situation. For this is not an all powerful God, he can lead the way, but not with divine power, he is unable to stop the lift from dropping without activating a sub-programme to over-ride the drop command, he does not ‘control’ the world (unlike Neo in the original Matrix), only uses what is already there to work for him. Whereas Clu, his nemesis and his antithesis, uses Might to control, forcing programmes to fight each other in gladiatorial battles, the losers being re-programmed for his own private uses – his is a world of conformity, driven by a desire to better the world, creating it in his own design of perfection, however twisted that might be. Flynn and Clu are the same, only Flynn has the ability to see the mistakes and learn from them, Clu is linear, unable to deviate from his core programme, the ultimate eventuality being that of entering the real world to bring perfection there. He begs to Flynn of his design, “I only did what you made me to do, create a perfect world” and Flynn, with no alternative, finally harnesses that one true power and opens his arms in love, bringing home the prodigal, coming full circle once more and closing the Grid again. Lofty ideas, for sure, and only part of the story.

Sam Flynn, Kevin’s son, is a chip off the ol’ block, living to the ideals of his father’s company, a digital world for all, he is still the largest stock holder of the company and uses his clout to stage unprecedented stunts (or hacks) against it and thus enabling free usage, as his father envisaged, of the software. It is this devil-may-care attitude that brings him face to face with Alan Bradley, Flynn’s old partner and the face of Tron, who has never given up on his belief that ‘Flynn Lives’. Sam is brought to life by Garrett Hedlund who imbues the character with the drive and ambition needed to compete against a computer world. His part does not demand much beyond that of “I can do this”, when clearly he can’t, nevertheless he does provide a strong enough lead character to follow, even if his charisma is lost somewhere in the Grid. Bruce Boxleitner revives his character form 1982, but sadly isn't given anywhere near enough screen time to make an impression, which is a real shame, a little more interaction would have made all the difference, I think.

The Grid itself is populated with only two significant characters, that of Quorra and that of Castor and or Zuse. Quorra is played by Olivia Wilde, she is an important part of the gird, in that she is an ‘Iso’ an artificial life-form created by the Grid itself and whose entire race was purged by Clu during his coup – though all this information is told to us and not convincingly portrayed by Wilde; you might presume a sole survivor of genocide might have a little resentment towards her nemesis, but it seems cold indifference is the way forward. An argument could be made that she has no real experience outside of her life with Flynn off the Grid, but her performance, to me, remains rather wooden. Castor, on the other hand is played with absolute flamboyance by Michael Sheen in a performance that I actually found quite irritating. Again a double dealing, murdering narcissist should, I feel, have some sense of respect, be it underlying madness or depth of personality, rather than a camp, egotistical show-off. But that might just be me. The rest of the programmes simply fade into nothingness showing little of any personality at all – again one could argue that as programmes this is exactly the way to be.

Finally, the last character I must mention is Daft Punk’s magnificent score, which by its very presence raises the quality of the entire production. There are some hilarious comments being made the Tron: Legacy is nothing more than a Daft Punk music video or that the film is actually more a video game than a movie. Personally, that latter statement does have a grain of truth; I remember playing Final Fantasy VII on the Play Station with is continuing score perfectly capturing the gaming elements – Daft Punk’s score does exactly the same for Tron: Legacy, capturing the essence of the mood of every scene, being in keeping with the ‘game’ of Tron, and being thoroughly entertaining in its own right.

The plot of the film is, when dissected, quite thin but what it does have going for it is stunning visuals, a stunning score and a familiarity with the concepts that makes is an easy watching film – it never forgets what it is there to do – to entertain and it does that without measure. Is it actually any good? As a film I’d have to say no, I don’t think it is a very good film, it has style over substance all the way, but it does have an over-riding sense of enjoyment and whilst it might not endure to the degree that its forbearer might, it will always remain a terrific watch.